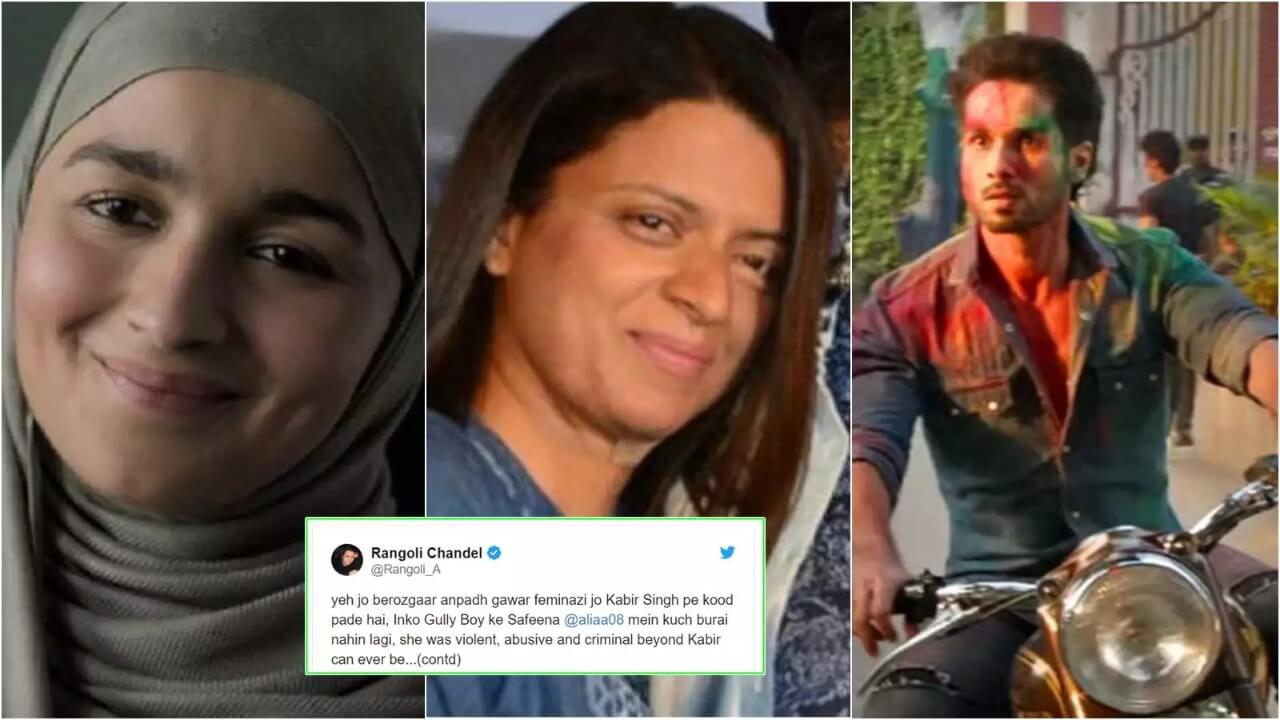 Has Twitter finally done something good? Something that makes the platform a slightly, very minor fraction of good?

You ask what happened? Well, apparently, Kangana Ranaut’s sister Rangoli Chandel’s Twitter account has been suspended as per latest reports.

Twitter is not a place of roses and sunshine, sure there might be good people there but there are also a lot of freaky people who have nothing better to do but troll others or tweet absurd things all day.

Rangoli Chandel has for long been called out on her strange tweets that are always picking fights with someone or the other. In fact, I even wrote about it not long ago. You can read it here: Top 5 Silly Tweets Which Prove That Kangana’s Sister Needs A Proper Job Than Just Being Her 24/7 Rakshak

But today news came about that her Twitter account had been suspended after several known personalities reported against it.

On 15th April, Rangoli tweeted out this: 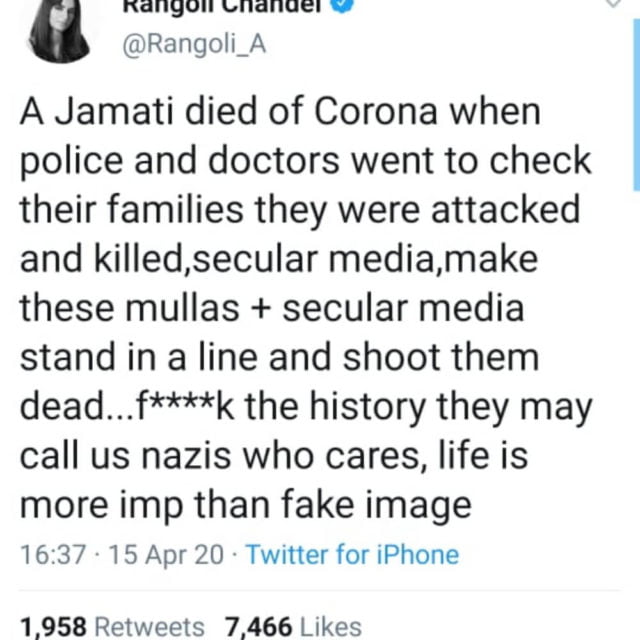 This angered quite a many people for being hate-speech against a minority community and for generally encouraging violence and hate against a community.

Reema Kagti, who directed the Akshay Kumar starrer movie ‘Gold’ had tweeted to Mumbai Police asking them to take some action against Rangoli for her tweet. She said, “@MumbaiPolice. Could you please look into this and take action? Isn’t this spreading fake news AND inciting hatred & violence against certain people? @OfficeofUT @AUThackeray.”

@MumbaiPolice. Could you please look into this and take action? Isn’t this spreading fake news AND inciting hatred & violence against certain people?@OfficeofUT @AUThackeray https://t.co/tKCqS5CZgN

Kagti also cleared up Rangoli’s tweets when someone asked if that post was true by tweeting, “No. The police and medical team were attacked by miscreants. No one was killed. And even if the news was true it still doesn’t justify a call to line up innocent people and shoot them, don’t you think?”

She added, “I condemn stigma & attacks on health and frontline workers wholeheartedly. The tweet you’re trying to defend is toxic. Please think about it for a moment and then hope you have the head and the heart to recognise that.”

Fashion designer Farah Khan Ali had also asked for Rangoli to be arrested by writing, “An FIR should be registered against her for this tweet. shocking beyond belief.”

Ali later on also tweeted out her happiness at Rangoli’s account getting suspended by tweeting, “Thank you for suspending this account. I reported this because she targeted a specific community…”, she tagged Twitter and CEO Jack Dorsey too in it.

Swati Chaturvedi, a journalist also tweeted on how Rangoli’s account should be suspended for making such “genocide calls”.

Kubbra Sait who has appeared in shows and movies like Sacred Games, Sultan, Gully Boy and more also spoke out on how she had not only blocked but reported Rangoli’s account to Twitter. Badminton player Jwala Gutta agreed with Sait and said how she had done the same.

Yep…so many people like her indulging in racist and communal tweets but police is hardly reacting…I wonder why….I have myself have reported many hate comments…

I doubt though that this suspension will really affect Ms. Rangoli. This is not the first time she has gotten into trouble with Twitter but a suspension is something new.

Even last week, Rangoli had posted about some warnings that Twitter had given her but that she has no plans on listening to them. She went on to write that, “If they suspend my account will open my own YouTube channel where I will make Kangana’s small videos saying what is there for everyone to see, we never said anything without evidence if twitter going to harass us we don’t want to be here just wishing good morning and good evening.”

Not long ago, she had even posted about how the 2024 Lok Sabha elections should be postponed given the economic crisis of India. She had called Twitter “anti-national” and claimed that if her account was suspended then the social media site would “go to graveyard”.

Here are some other examples of her senseless tweeting: 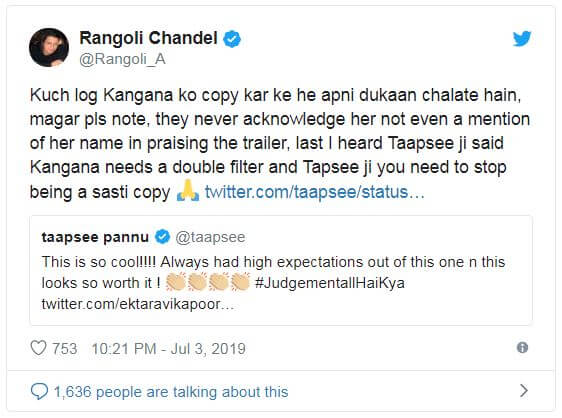 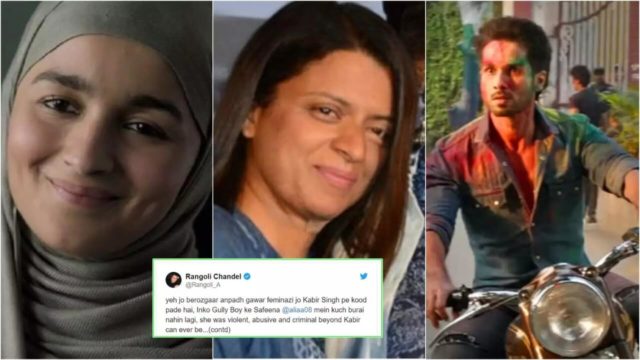 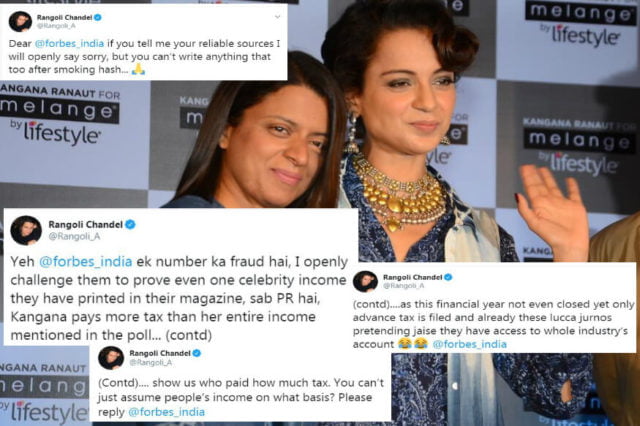 Rangoli even released a statement, as per a report by Times Of India, on her account getting suspended saying that,

“Twitter is an American platform absolutely biased and anti India, you can make fun of Hindu Gods call Prime Minister and Home Minister terrorists but if you say anything about people pelting stones on health workers and Police forces they suspend your account, I have no desire of empowering any such platforms with my perspective and honest opinions, so I am not reviving my account, I was my sisters spokes person now watch out for her direct interviews, she is a huge star she has many ways of reaching out , a biased platform can be easily avoided.”