Despite soaring cases of COVID-19 patients, US faces anti-lockdown protests in various cities such as Michigan, Ohio, Texas, Washington and Pennsylvania. The size of demonstration varies from place to place- few dozen people showed up on the streets of Virginia and Oregon whereas about 2,500 people gathered in Washington, which also happens to be an epicenter for the spread of coronavirus infection.

Why are protests happening?

Protestors claim that such stringent measures are damaging local businesses and are unnecessarily causing immense pain to the citizens. It is impairing the economic health of the country.

“Business owners are being forced to lay off employees while the unemployment system is failing those laid off as the economy freefalls.”

Where are protests happening?

Thousands of protesters were spotted at Lansing, Michigan to protest against Gov. Whitmer’s restrictive lockdown order.

Some were deliberately causing traffic jams while others were seen waving American, “Don’t Tread On Me” and Trump campaign flags.

As a response to anti-lockdown protests Whitmer commented that though people wanted to “do the wonderful American tradition of dissent and demonstration … it’s just so dangerous to do that”.

Others were seen carrying out armed protests.

Several hundred people protested against DeWine’s stay-at-home order outside the Ohio Statehouse on Saturday, according to The Columbus Dispatch. 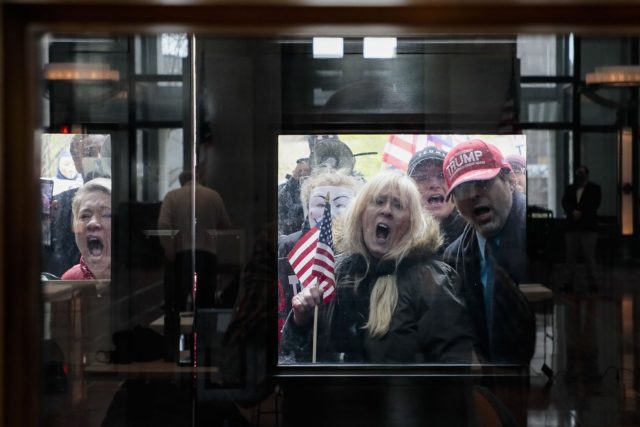 Anti-lockdown protestors were seen carrying guns in Kansas city, Pennsylvania. Others were seen protesting with “Don’t Tread On Me Flags” and held signs that read: Freedom Is Essential.

A procession of cars swarmed around the Republican-dominated statehouse in Oklahoma City with messages written on windows or signs that said “stop killing our economy”; “we need our church” and “time 2 work”.

Read more: A Picture Story Of India And How Quarantine Has Changed It

A protest occurred in the Texas capital of Austin, where protesters chanted “Free Texas” and “Make America Free Again”.

A protester holds up a sign protesting wearing a mask at the Texas state capital building.

A rally in Olympia, Washington state, attracted more than 2,000 people, according to the Seattle Times. Picture below shows hundreds standing in close proximity outside the state capitol, thus, completely neglecting social distancing rules.

People flocked to Florida beaches after Governor Ron DeSanti’s order to reopen beaches. #FloridaMorons trended due to their irresponsible attitude. 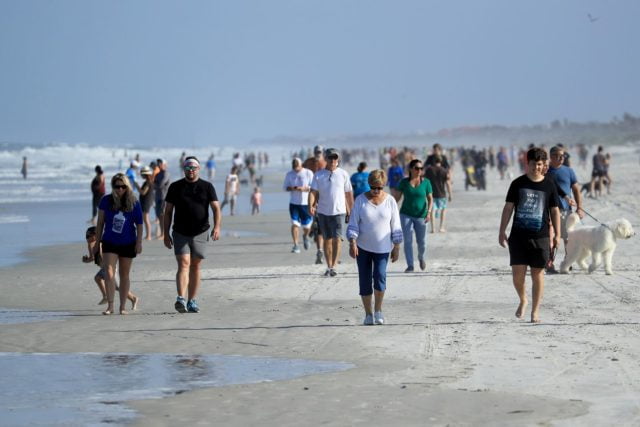 Some of the tweets are given below:

STOP COVID19 by tracking people. #FloridaMorons We have the tech & they aren't wearing masks. They're a threat to public health & might travel to your state! pic.twitter.com/Rc0OBDE6y2

Their own governor doesn’t even know how to put on a mask! What a bunch of idiots. #FloridaMorons pic.twitter.com/2E1wsFVykS

Epidemiologists predict a ‘new epidemic surge’ due to right wing anti-quarantine rallies and counter-protests that continue to spread across the USA.

Nurses in Denver were seen blocking protestors on the road. 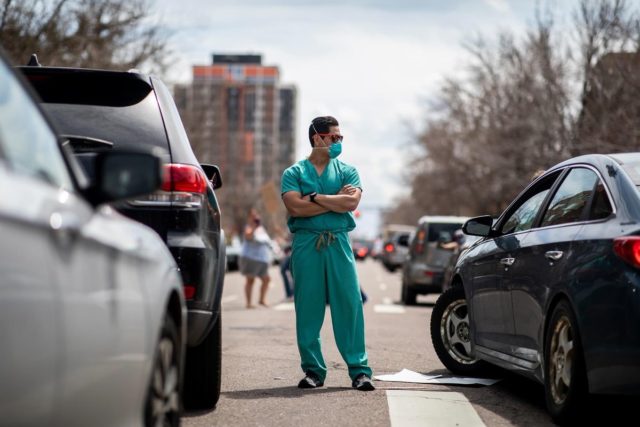 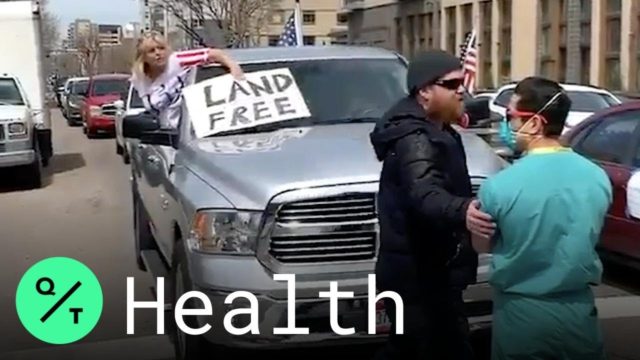 In the picture below, a middle-aged woman leaning out of a car, carrying a sign that said: “Land of the free” can be seen.

“This is a free country,” she shouted in anger. 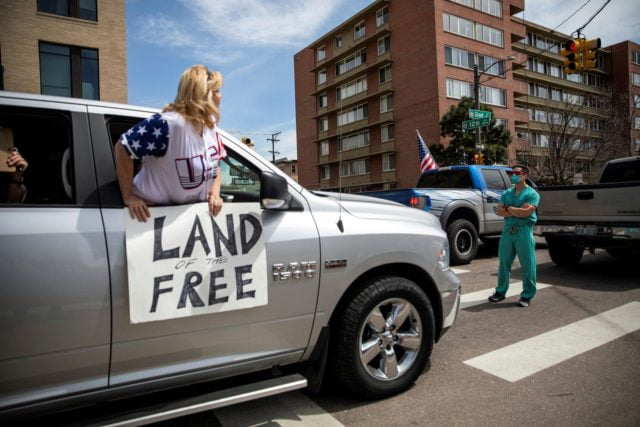 Many people on Twitter supported these acts by nurses in preventing surge of COVID-19 cases. Some of the tweets are:

Nurses blocking anti lockdown protests in Denver is the kind of bad assery that we all should aspire to pic.twitter.com/zkMZaANSk4

I’ve seen many posts saying nurses should be in the hospital if “they’re so overwhelmed,” in response to nurses counter-protesting the anti-lockdown protests. If this is how you feel, don’t go running to the hospital when karma hits your dumb ass with COVID

Something for the history books.pic.twitter.com/Z6szc3YWWC

Commentators have accused Trump of provoking anti-shutdown protests and have called his comments naive and unhelpful. As protests erupted in Michigan on Friday, Trump tweeted: “LIBERATE MICHIGAN.”

He is held responsible for instigating rallies.

LIBERATE VIRGINIA, and save your great 2nd Amendment. It is under siege!

A Twitter user wrote “This is how authoritarianism works. The pro-Trump folks believe that they can just ‘liberate’ themselves from a deadly virus by brandishing their guns. And Trump eagerly wants them to believe that. He doesn’t care if they get sick and die in the process”.

He was invited to attended, but said he was leaning against it — not because of health risks — but because he didn't want to be seen as pulling the strings. https://t.co/rIf7i7Gs0u

Trump just said that governors were going to "call your own shots." But now he's tweeting about 'liberating' states led by Democratic governors who have seen protests from anti-lockdown protesters. pic.twitter.com/LDEzuKjeEh

It seems funny as well as ridiculous that Americans are protesting against a stay-at-home order that aims at preventing the spread of coronavirus infection. They are prioritising finance over health which may reap negative effects in near future.

Slogans like ‘Jesus Is The Vaccine’ evoke God for all bad reasons. We must understand that ‘God Helps Those Who Help Themselves’. Flattening of curve is a result of stringent lockdown rather than God’s grace.

At the same time, I would like to appreciate the efforts of nurses at Denver to prevent anti-lockdown protests in this time of crisis.

The whole of America is in turmoil due to massive demonstrations and rallies amidst the coronavirus pandemic.