The phrase ‘golden temple’ has always been associated with the Harmandir Sahib or Darbar Sahib gurdwara in Amritsar.

However, there is another golden temple that not many know of all the way down in south of India which is made up of almost double the gold used in Amritsar’s golden temple.

It is the ‘Golden Temple of Sripuram’ located in the Sripuram spiritual park in the Vellore city of Thirumalaikodi (Malaikodi) in Tamil Nadu.

On 24th August 2007 the temple along with its principal deity Sri Lakshmi Narayani or Maha Lakshmi was made public by performing the Maha Kumbhabhishekam. 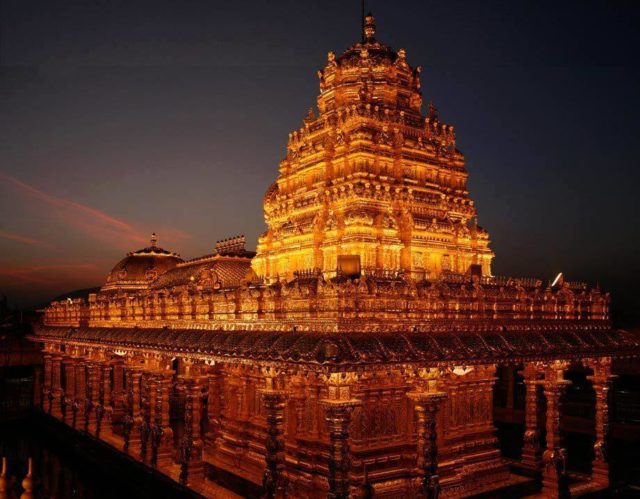 Also called the Sri Lakshmi Narayani Golden Temple, it is one of the largest golden temples in the world.

According to sources, every sculpture and intricate design was done manually by artisans who specialised in temple art.

Also, almost every single detail and architectural work in the temple has some reference or another from the ancient texts of Vedas. 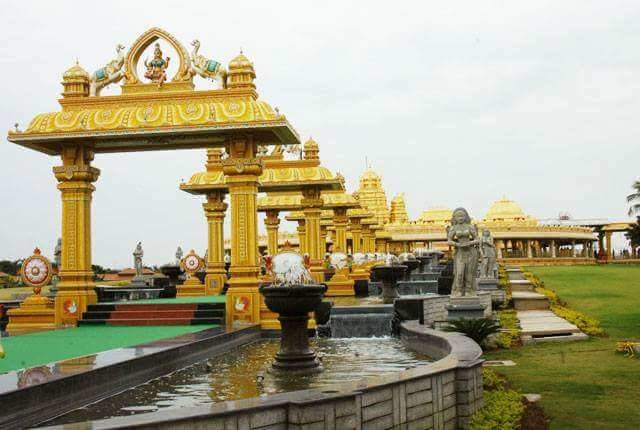 Apparently, the entire temple is covered with around 1,500 kg of pure gold which is almost double that of Golden Temple at Amritsar.

The Amritsar gurdwara only has about 750 kg of gold gilded onto the main dome. 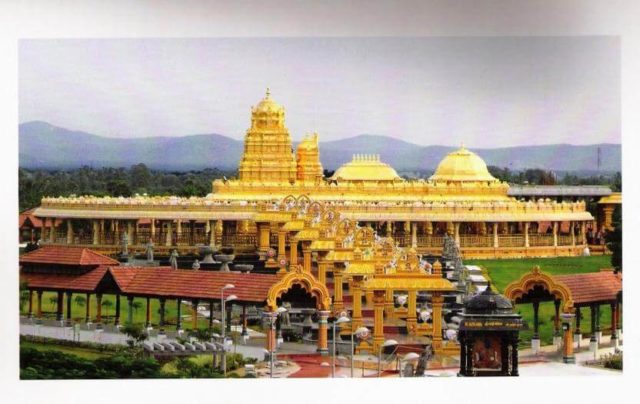 The temple does require a bit of a travel as it is slightly far from the major cities around it. The Sripuram Golden Temple is around 200 km from Bengaluru, 145 km from Chennai, and 120 km from Tirupati. 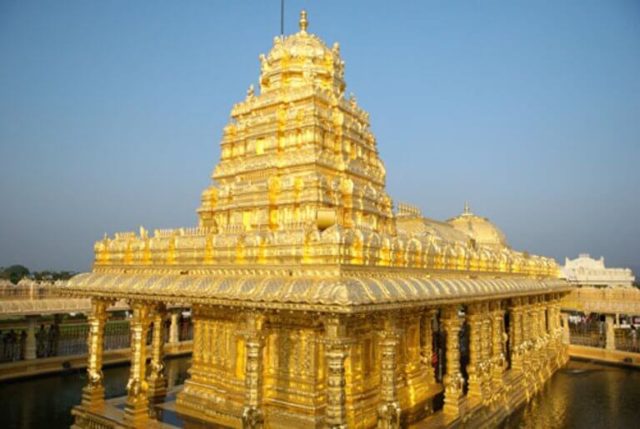 The temple is constructed in a star shape as a reference to the Sri Chakra of Goddess. The temple is made of three parts:

The main attraction of the temple is the Vimanam and Ardha Mandapam of the Sri Lakshmi Narayani temple which houses the principal deity that is covered with pure gold. 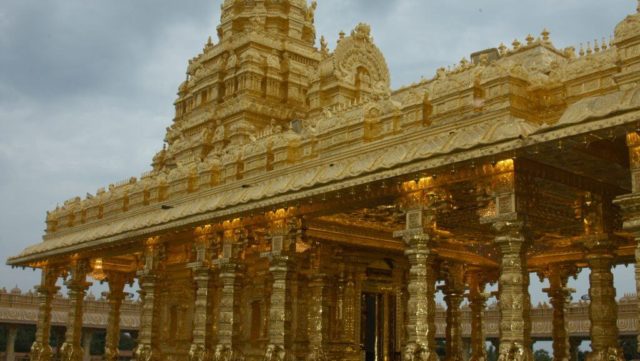 Not just gold but other interesting material has also been used in the construction of the temple. A grey stone called the ‘Paradiso’ known for its wave patterns that look violet in color has been used for the steps that takes a person to the innermost section.

That along with a polished black granite have both been brought in from the South Arcot and Dharmapuri districts, close to the temple site. 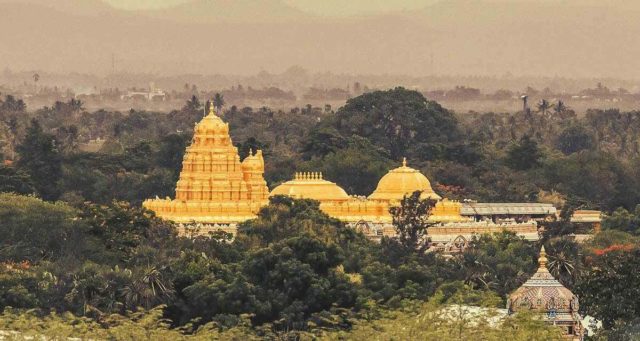 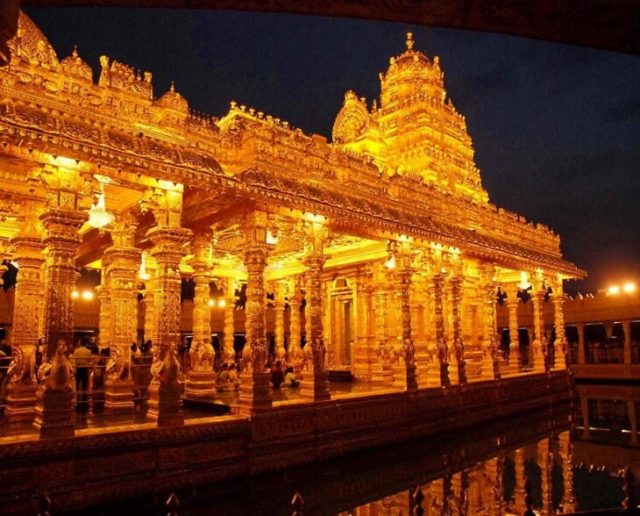 The lighting of the temple has been arranged in such a way where it seems to shine brightly even during the night. 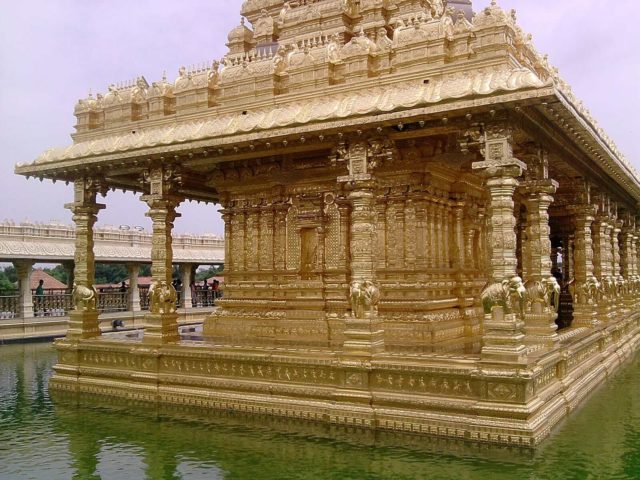 Built at a cost of Rs. 600 crores, the temple’s construction was completed in just 6 years by around 400 goldsmiths and coppersmiths, including craftsmen from Tirumala-Tirupati Devasthanams. 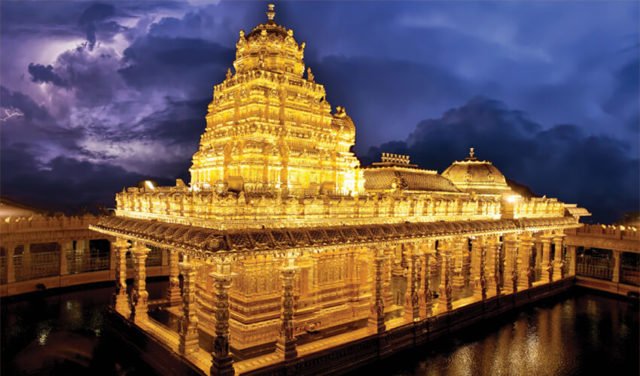 It is always interesting to learn about such interesting things that are in our country and the kind of architectural marvel it seems to be.