Home Social Opinions This Malayalam Actor’s Post About The Walayar Rape Case Is A Fearful... 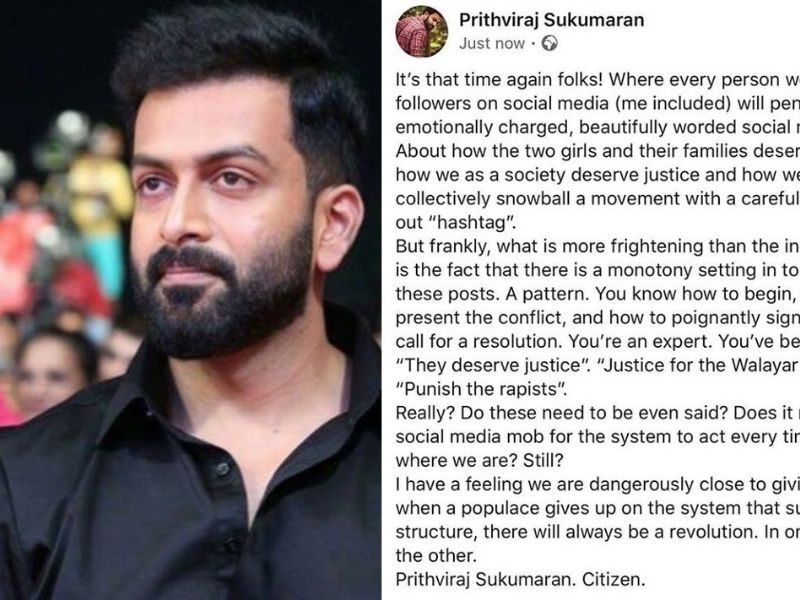 On January 13, 2017, Kerala awoke to the news of what is now known as the ‘Walayar rape case‘. A 13-year-old Dalit girl was found hanging in her house in Attapallam, near Walayar, by her 9-year-old younger sister.

Within just a few weeks, on March 4th of the same year, the younger sister was found dead in a very similar manner. She had a photograph of her deceased sister tucked away in her petticoat.

Autopsy reports had suggested possibilities of sexual exploitation of both the sisters and this led the investigation team to five main suspects, including a juvenile. The list was further shortened to 3 suspects.

Recently, all those three men were acquitted of all charges pending against them. They were set free due to lack of substantial evidence proving their guilt.

The sisters in the Walayar rape case were tragic victims of continued incidents of sexual assault and misconduct. The investigation into this fact led to the arrests of the girls’ close relatives, M Madhu and Shibu, along with the arrest of their neighbour, V Madhu.

What agitated the entire populace of Kerala was the fact that despite having dragged the case for so long, the investigating team was not able to produce adequate evidence in court, proving that these men are guilty.

From political agendas to the incompetence of the police, people have been throwing shade at all parties involved in a bid to try and understand the chaotic nature of the proceedings. Not surprisingly, netizens including celebrities have been chirping in.

By signing off as a ‘Citizen,’ Prithviraj has thrown light at a very stark and fearful fact about our current state. It’s not just about the injustice served to these victims; it is also about all the victims of similar crimes.

Also Read: Isn’t It Obvious Why Everyone Related To BJP MLA Unnao Rape Case Is Dying One By One?

As he says, it has become a pattern, isn’t it? Something deeply disturbing occurs somewhere around us, tens of thousands of people join their virtual hands in solidarity to decry such sinful acts and uphold the rights of the victimized.

But do such actions yield any good? Perhaps a few more extended days of media outrage and pressure on the government, but other than that, what else?

When we probe further, just as how the actor has done, we’d only realize that this is nothing but a vicious cycle of empathizing and forgetting, of which all of us have now become so used to.

Like Prithviraj has mentioned, all of us are pretty clear about what we want to achieve by coming up with such amazing online posts. We want ‘Justice for the Victims,’ and ‘Punishments for the Accused,’ and we are not wrong in making these demands.

But, we all need to agree with the actor’s statement that all of these things need not be repeated, or for that matter even said out loud! An isolated incident or not, justice for the harmed and brutal sentencing for the criminals are things that any system must be offering to its citizens.

The fact that the Walayar rape case has been mishandled to the extent that the criminals have walked out with no form of reprimand is beyond agitating. Even more, is the fact that the entire system of the land is showing a deaf ear to all the outcries of rage.

Why is it that only everyone outside the realm of governing and law-making seems to be bothered and not the ones actually inside it? Is this how we wish to see ourselves and our country be governed?

Like Prithviraj has so bravely stated, how many more incidents of online fury is required for our system to change for good? I’d rather start with this question – Is change even in the cards?

Wayanad, Kerala Is Trending Thanks To Rahul Gandhi But Have You Seen These Pics Of Its Beautiful Unknown Sights?