HomeLifestyleHow to Boost Your Confidence and Outplay Your Opponents in Online Rummy...
LifestyleTechnology

Confidence is one of the decisive factors in online rummy games. Without it, even the best can get defeated, and for the ones who play rummy online to win real money, lack of confidence could prove to be disastrous.

The following are a few practices that might help you build your confidence in online rummy.

Be aware of every rule in the book

The first thing that you need to do to become a good rummy player is a proper understanding of the rules. However, that does not mean you mug up all the rules and enter into a tournament the very next second. To put all the rules to use, you need to play a lot of practice games and play the game more often. The best option is to start playing against amateurs or even the computer at a low difficulty level. This way you will achieve a stronger grasp of the rules and regulations of the game.

Always build a strategy in advance

Never get into a rummy match without carrying a game plan or strategy. The chances of winning only with luck or your opponent’s poor judgement are quite slim. Hence, it is always useful to follow a specific set of proven tips and tricks to maximize your chances of winning a rummy game. 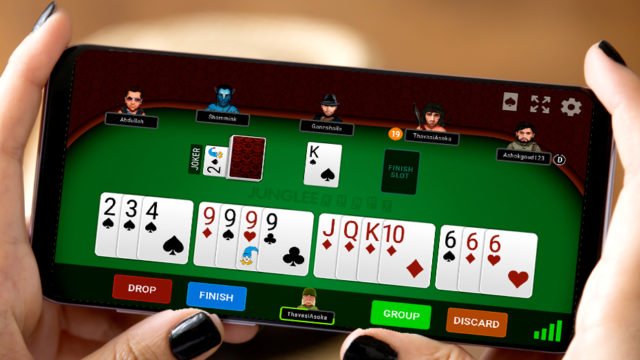 The essential piece of advice that every player should keep in mind is to arrange the cards. For example, let’s say you have four cards – the Ace of Hearts, the two of Spades, the Ace of Spades and the four of Spades. Many players will keep this set as it is without properly organization, owing to the absence of a perfect meld. But what they do not realize is that they might fail to identify the card they need from the discard pile due to the absence of arrangement in their cards. The right method to hold the cards is this: the Ace of Hearts, the Ace of Spades, the two of Spades and the four of Spades. This way the moment you see an Ace of any suite or the three of Spades, you can pick it up and complete your meld.

Knowing just the rules of the game does not help often and will not take you far enough in a match with an expert. It is necessary to learn tricks alongside your understanding of the rules. Most of them involve fooling the opponent. For example, let’s say you have three cards – the five, six and eight of Diamonds. You are looking for the seven of Diamonds and are pretty sure that your opponent is holding it. Now you pick up a Spade from the closed pile. Since it is not of much use to you, you will be tempted to drop it. However, this is where you get to change the game by letting go of either the five or eight in your hand. Doing so will make the other player think that you might not need the seven of Diamonds and make him drop it only for you to pick it up later. Maybe you missed the opportunity to make a meld of four, but at least you got rid of three cards. Also, there is a chance that the five or eight could be useful to your opponent, but such a thing rarely happens.

Sometimes we should take a look at the past records of famous players who have won several games. You can do so by watching online videos or even observe the game of your opponents while playing a game. It helps in learning a lot, as a similar scenario might occur in a future game. Since you know how one player once got out of that situation triumphantly, you will have a better chance of winning the game.

Always keep a note of your previous games and recollect how you won or lost a particular match. Learn from your mistakes and build up a plan to overcome a similar situation in the future.

Practice as much as possible

By now, if you can blindly recite all the rules in the book and also have gathered some cool tricks up your sleeve, do not get over confident about it. Your opponents will have their tricks as well, and thus the only way to outplay them is to practice the game as much as possible. More practice will make you more experienced. You will be able to react quickly and more effectively to challenging situations arising in the game. Again, the best way to practice and gain experience without risking valuable money is by playing against the computer or playing practice games. Many offline and online rummy games provide this feature.

More or less, that is pretty much it. Sincerely follow all the points mentioned above, and you will become an online champion in no time. So start gaming now!

Sources: Wikipedia, Quora and others

Facebook
Twitter
Pinterest
WhatsApp
Previous articleBack In Time: 2 Airplanes Collide In A Freak Accident Killing 583 People
Next articleEvolution Of Online Games And Our Favourite Board Games