If you still didn’t get it: This is a fake interview written purely on the basis of the author’s imagination of how the actual interview would have been if we got the chance to interview these famous (for all the wrong reasons) personalities in real. In short, just have a good laugh!

ED: The highly anticipated final season of HBO’s Game of Thrones is slated to release in 2019, and so it only seems fitting that we interview someone who will be in the thick of the action- ED welcomes The White Wolf, He Who Knows Nothing… JON SNOW! 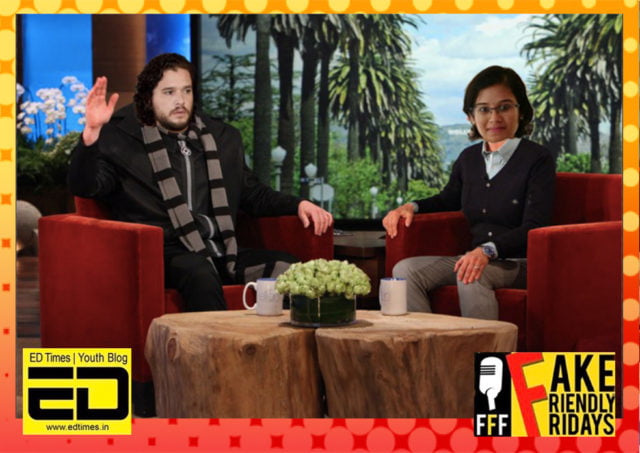 (Jon Snow walks in with his famous sword in hand, smiling and waving.)

ED: (aside) He really does seem to know nothing.

ED: (nervous laugh) I meant, how do you feel about the upcoming fighting?

Jon Snow: Well, we definitely have an uphill battle ahead of us. Defeating the White Walkers won’t be easy, but we have 2 dragons on our side. We are literally going to fight ice with fire.

ED: (quips) You could even say it’s going to be a Cold War!

ED: (clears throat) Moving on… It is rumoured that you’re in a relationship with your political ally, Daenerys Targaryen. Any comments?

Jon Snow: She is a “fiery” ally, and one of the “hottest” women I have ever met.

ED: Alright. Reports suggest Jaime Lannister has defected to your side to help fight the White Walkers, finally shifting loyalties from Cersei. What do you have to say about this?

Jon Snow: It was about time he came to the right side of history. He’s not a bad chap, Jaime. It’s all Cersei’s bad influence. I don’t know what he sees in her. And they’re even related by blood… Ugh. Makes their union all the more questionable.

ED: (flashes back to the scene of Jon and (his aunt) Dany making love on the ship) You really know nothing, Jon Snow.