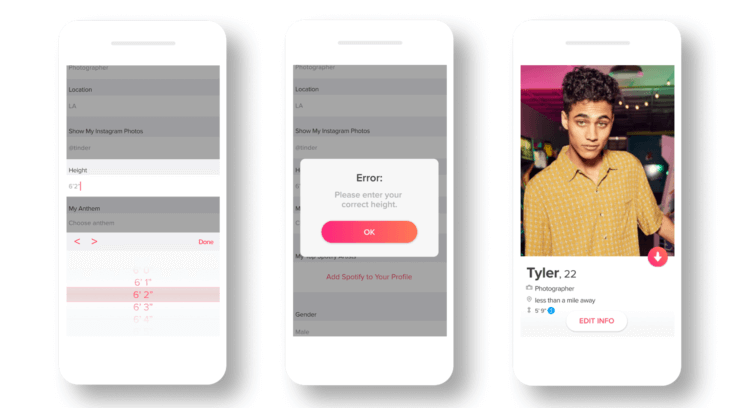 In the world of online dating, there is no denying that many people lie about their physical attributes but Tinder has now decided to put an end to it, step by step.

Imagine matching with a guy whose Tinder bio says he is a 6’3 but when you meet him in person he looks as tall as your brother in the 8th class. Real disappointment ladies and guys.

And this is where Tinder stepped up, putting an end to people who lie about their height by introducing the new Height Verification badge.

“It’s come to our attention that most of you 5’10ers out there are actually 5’6. The charade must stop. This type of dishonestly doesn’t just hurt your matches — it hurts us, too.

You were only thinking of yourself. Well, height-lying ends here. To require everyone under 6’ to own up to their real height, we’re bringing truthfulness back into the world of online dating.”

Staying true to their words, the dating app was updated on 30th March 2019, announcing the new feature on Twitter.

The feature asks the user to feed in their accurate height and then send a screenshot of themselves standing next to a commercial building. The app will then use a number of algorithms to verify your height.

The company says that their new tool is very easy to use and really hard to misuse.

Ever since the news broke there has been a variety of reactions but mostly in the favour of the update.

And some think it is an April Fool’s joke, played too soon.

Just in case you were worried about disclosing your actual height then don’t panic, it was a well elaborated April Fool’s prank by Tinder.