I had a very misunderstood mindset about the violence in Kashmir against the security forces. Being a defense aspirant, I always had a one-sided view on it. But after researching and digging into the matter a bit, I see things quite differently now.

It isn’t just India and Indian politics that introduces all the turmoil in the northernmost state of our country. It is also our beloved neighbour Pakistan’s actions.

Violence and militancy are not at all new in Kashmir. It has been going on for decades, beginning as early as the 1980s, after which started a very troublesome time for the youth with the emergence of radical Islamist groups like Jaish-e-Mohammad and rebel communities who wanted self-determination of law in their homeland.

Political control and claim over the land of Kashmir, which is now broken into 2 union territories – Ladakh and Jammu & Kashmir, by India and Pakistan fuels this disturbance.

Everlasting insurgency from Pakistan, illegal control of Kashmiri land, protests and violence is what has become the identity of the land which was once known for its beauty.

Also Read: Why Did UN Security Council Approve A Rs. 1.5 Lakh Monthly Package For The 26/11 Conspirator

Why Do Educated People Pick Up Weapons?

Imagine, as a school-going kid, words like curfew, cordon, search, attack, bomb blast, fire, custody killing, interrogation and surrender become things you hear on a daily basis. What is your upbringing going to be like? What kind of atmosphere is this for a kid to grow up in?

A police official told the Wire that social media has glamorized militancy and a narrative has been created where the rebels are worshipped like heroes. When they die and their bodies reach their village, they are called martyrs.

For Burhan Wani, there were people forming human chains for kilometres in length to welcome their hero, who died in an encounter with the security forces.

Educated people like Mohammad Rafi Bhat, a professor, who his students adored, pick up weapons against their own countrymen because they want to put forward a front of fighting oppression from the Center.

If politics goes away, control and power goes away – exactly why politicians at the Center never retreat any troops from Kashmir and keep it a hot zone.

This is exactly what the Kashmiri youth wants to fight. The military is probably just stuck in between orders given to them by those in power and the rage that their own fellow Indians in Kashmir carry.

Sadly, our neighbour is also not a decent one and keeps infiltrating our lands to cause mayhem. We’ve had a couple of wars due to this if you want proof. 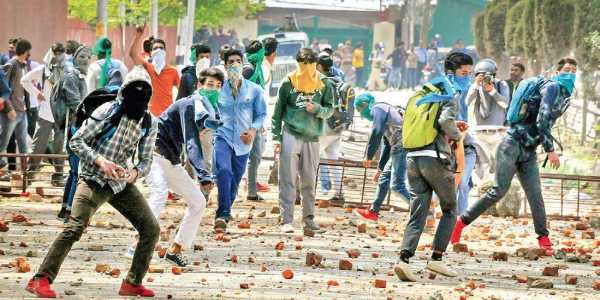 Militants like Burhan Wani, Masood Ahmad Tantray, Ghulam Mir and Maqbool Ilahi are not martyrs. When Adil Ahmad Dar rammed a vehicle filled with explosives into a CRPF convoy and killed 40 soldiers, it was not right and it can never be justified.

At the same time, criminalization of free movement, separatist politics and unwanted actions like cutting down mobile, internet services by the Center is also not justified.

Unfortunately, they found no other way than that of guns and bombs to carry out their mission. A mission which they probably don’t even fully understand, and carry out the dirty work of separatist groups who brainwash these young minds with one word – freedom.

In no way is this article meant to hurt sentiments of any community. And the limitation on the length of the article only allows me to scratch the surface of the matter.

Stranded between the need for security and defense from insurgency, as well as the right to basic freedom, those beautiful northern lands are red with blood and black with ash – a sight nobody wants to see.