Vivek Agnihotri on 28th August 2018, posted a tweet that asked his followers or people in general to make a list of people who have spoken in defence of Urban Naxals.

I want some bright young people to make a list of all those who are defending #UrbanNaxals Let’s see where it leads. If you want to volunteer with commitment, pl DM me. @squintneon would you like to take the lead?

His tweet came in light of the arrest of 5 left-wing activists who were “allegedly” connected to the Bhima- Koregaon violence of last year. “Apparently”, Varavara Rao, Vernon Gonsalves, Arun Ferreira, Sudha Bharadwaj and Gautam Navlakha are accused of being a part of the ‘Elgar Parishad’ event that was held in December of last year in Pune and as per reports is said to trigger the violence between Dalits and the upper caste of the region.

The 5 activists who were arrested on Tuesday, are “said to be” Maoist sympathisers with the police claiming that they were “involved in recruitment and funding apart from promotion and planning Maoist activities, while the Maoist cadres fought in the red zones of the country.”

The police according to reports has also said that they found letters that had plans to ‘assassinate’ the PM and to ‘exploit’ the death of a person during the Bhima Koregaon violence.

Apart from that, the police have held raids at the houses of several professors, and other activists across India to investigate who else could have been a part of that group.

But Agnihotri’s inciting tweet resulted in a lot of backlash by students, journalists, activists and more who have said that the term ‘urban-naxal’ was just created to put people who are anti-establishment in a negative light. The filmmaker is also accused of creating unnecessary hate and dividing people.

More: Kerala Pastor Apparently Said That ‘God Was Now Punishing The People Of Kerala For Their Sins’ To Explain The Kerala Floods

On 31st August 2018, a Twitter user called Raj Aanand, an apparent BJP supporter, posted a list of names divided into categories along with their Twitter handles.

This list is certainly a little scary as it could lead to hate and cyber (then real) violence against the people mentioned in the list.

A social media advisor and activist with the Vishwa Hindu Parishad (VHP) also shared the list. 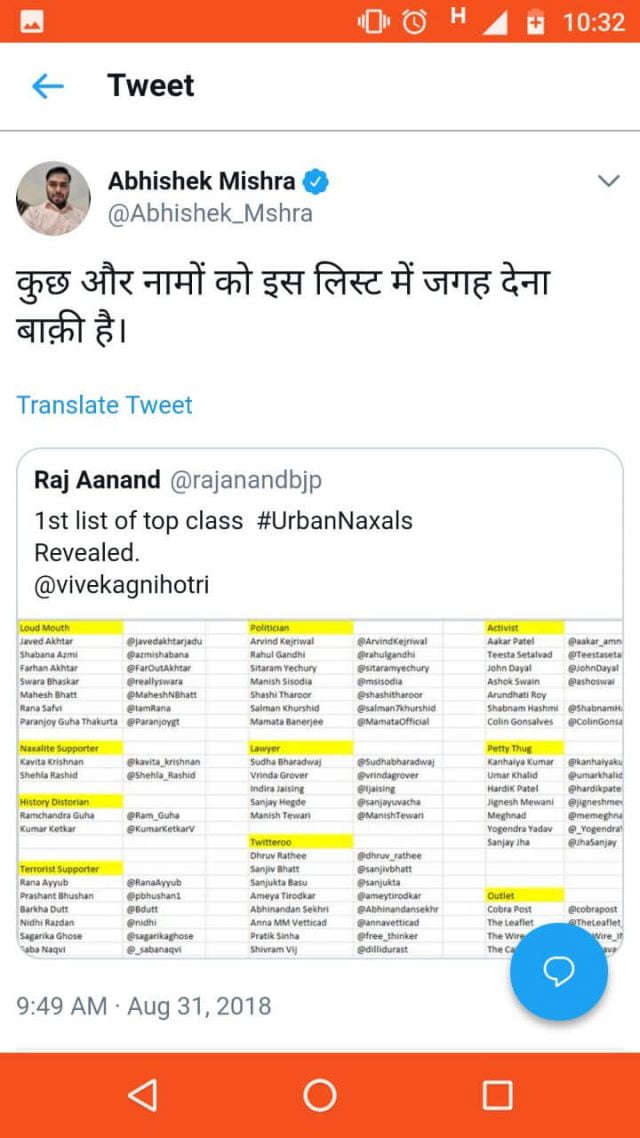 Vivek Agnihotri for his part has stated that,

“he didn’t aim to create any ‘actionable’ list, but just a dataset where people can see what is common between those who were supporting the ‘Urban Naxals’.”

Many people are saying that this is just a marketing gimmick to promote Agnihotri’s book called Urban Naxals: The Making of Buddha in a Traffic Jam.