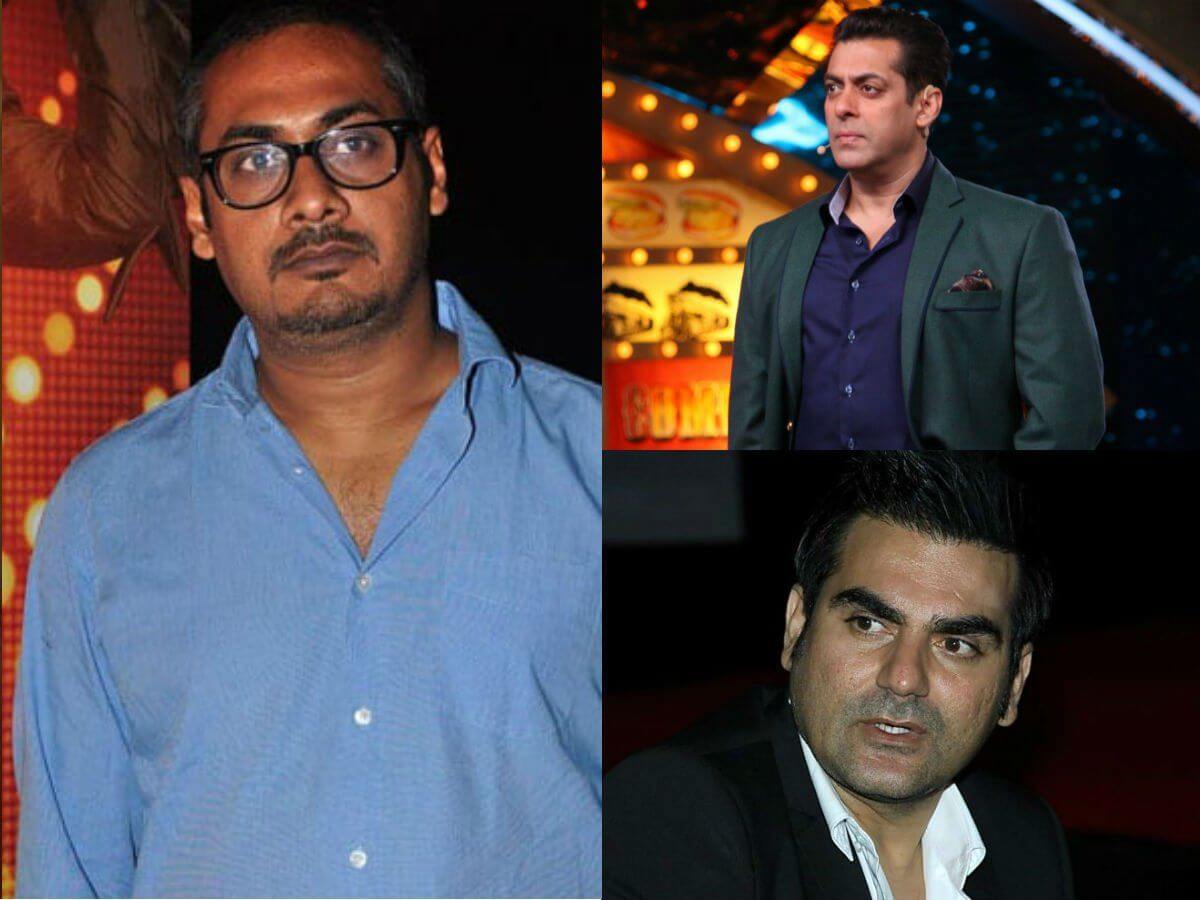 Rajput was certainly not an out of work actor, but at the same time, he was also not considered to be one of the inside people in the entertainment sector.

Kangana Ranaut’s video on his suicide and how the industry continues to not acknowledge talent and bury the ones who come from outside the industry is certainly something.

#KanganaRanaut exposes the propaganda by industry arnd #SushantSinghRajput's tragic death &how the narrative is spun to hide how their actions pushed #Sushant to the edge.Why it’s imp to give talent their due &when celebs struggle with personal issues media to practice restraint pic.twitter.com/PI70xJgUVL

Although sure, she ventured off onto her own tangent and how she has been ‘victimised’ but some points she made were true about the industry.

Rajput’s untimely death has not only made many people extremely sad but also started a burning debate about the Bollywood industry, how it works, the culture inside it, nepotism and more.

People from outside the industry are asking the questions, about how mental health is dealt there, how alienating many can get and people from inside are coming out with their own experiences and exposes about Bollywood.

One of the biggest ones would certainly have to be from Abhinav Singh Kashyap about how allegedly Salman Khan and his brother Sohail and Arbaaz Khan have been sabotaging his career for almost a decade now.

My appeal to the Government to launch a detailed investigation. Rest in peace Sushant Singh Rajput… Om Shanti.. But…

His next directorial venture, Besharam, starring Ranbir Kapoor failed to make it as big as his debut project. Since then he has not released any other film or project whether on web, short movie or anything else.

Singh in his Facebook post though has come out claiming that Salman Khan and his family, especially his brothers have been actively sabotaging his career and bullying him. 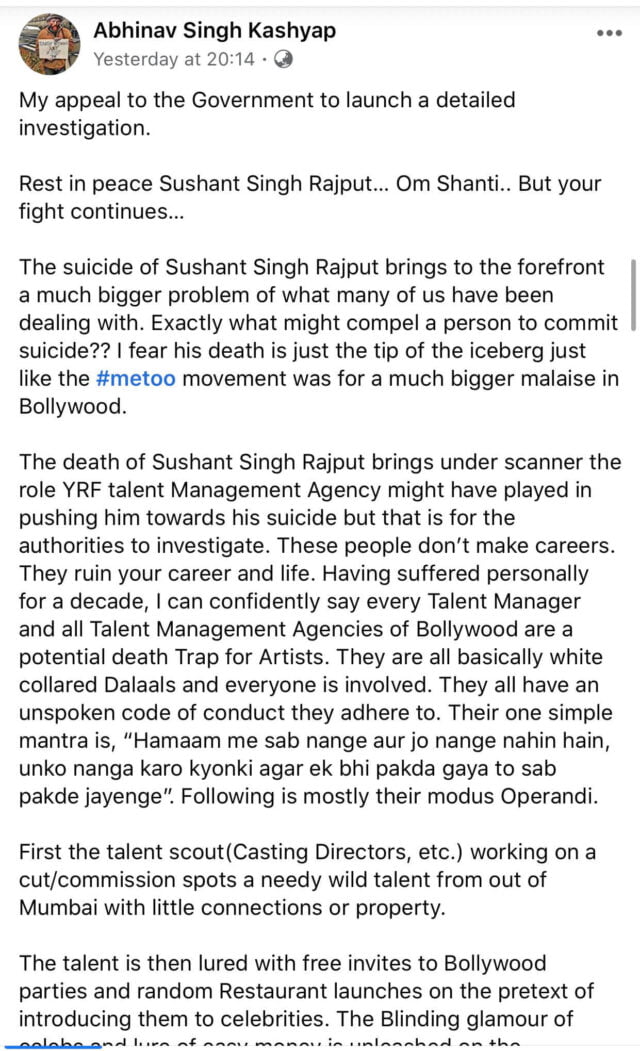 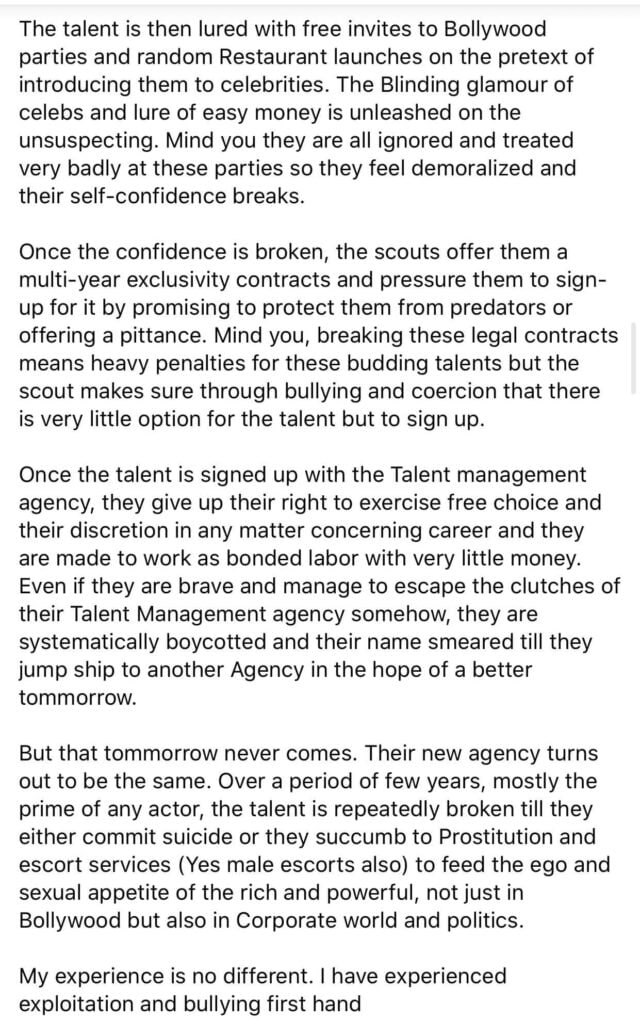 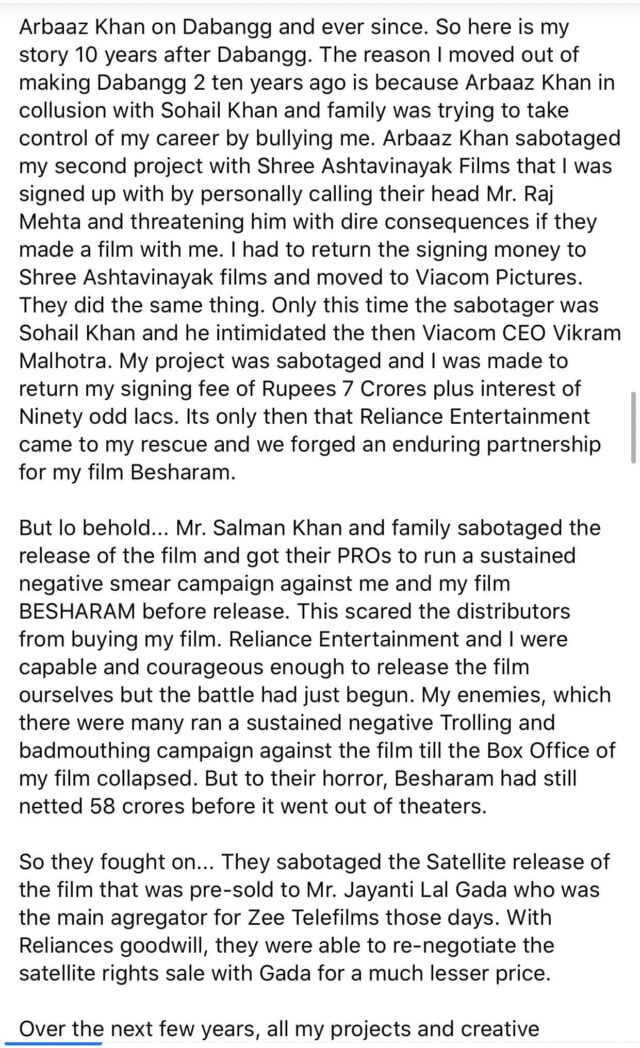 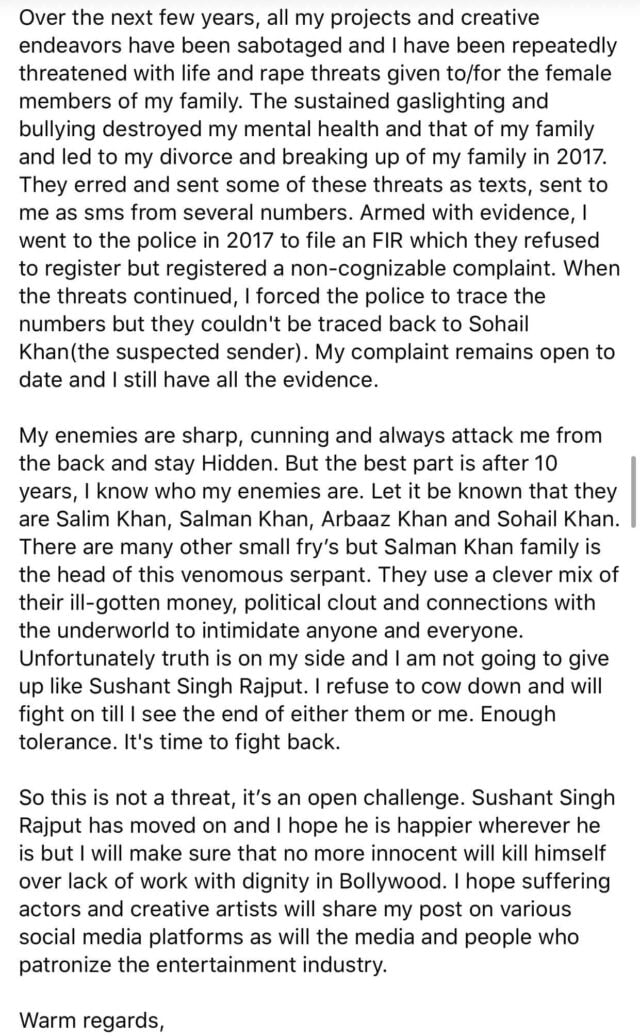 With the post touching 4,500 shares and almost 2,000 comments, people are certainly talking about it.

Not only on Facebook but there are posts being made about him on Twitter and other social media platforms.

For the most part, people seem to be supporting Singh and bashing Salman Khan.

We Should Stop Watching His Movies….
Karan Johar Is Equally Responsible As Salman khan For #SushantSinghRajput Suicide #BollywoodBlockedSushant #SalmanKhan pic.twitter.com/2KTMiMvyiF

Film director Abhinav Singh Kashyap,who has directed films like dabang and Besharam has penned down the following post on Facebook.He has provided a detailed account of the bullying and mental harassment faced at the hands of #SalmanKhan and his family.Shame on Bollywood. pic.twitter.com/5KPySbpEzY

Pained to read this about the industry I love #Bollywood

Always knew #SalmanKhan was a bully, didn't know it was true about the family

Hope there was nothing sinister about #SushantSinghRajput's death, and Abhinav gets the success he deserves @anuragkashyap72 pic.twitter.com/ZZ074epn6A

Please take a moment to read this post by Dabangg’s director, Abhinav Kashyap.
He talks about how he has been bullied & mentally tortured by the bigwigs (Salman Khan & family) of Bollywood. I am appalled. pic.twitter.com/Nj9WIFymEx

However, there are also some who are accusing Singh of trying to get some time in the limelight using the suicide of Sushant Singh Rajput.

Some are asking why the director did not come forward with all this information before and why wait almost 10 years to do so.

Whether Singh’s allegations are true or not, the fact that there is clear monopoly of power in Bollywood industry is a truth that no one can deny.