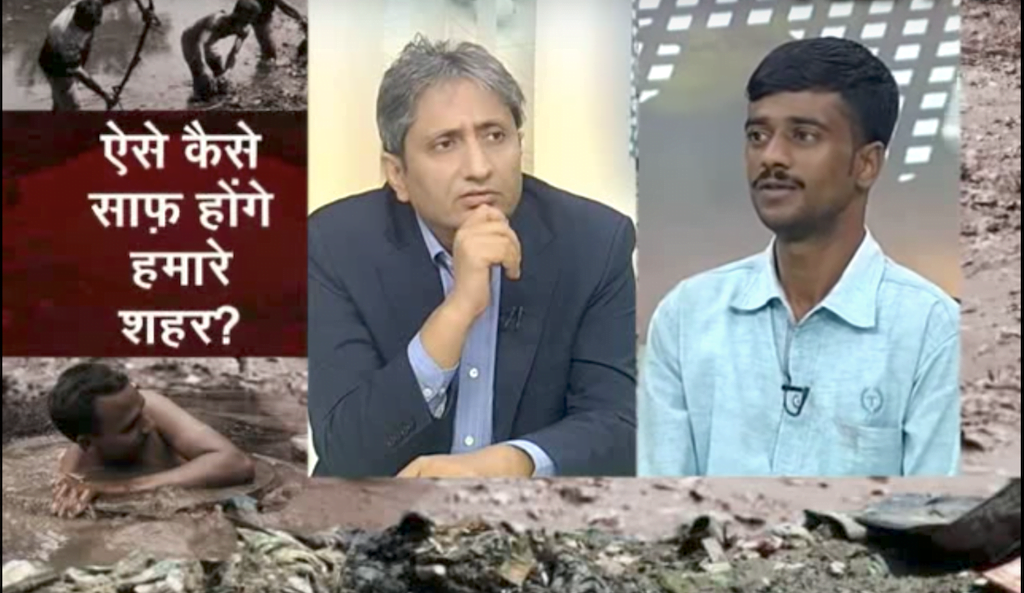 Not every day you get to see journalists howling like wolves on TV screens.

Okay, err… yes, you see it every day.

Let’s do this again.

Not every day you get to see elite news panelists having serious discussions with sanitation workers on prime time slots. Ravish Kumar invited actual scavengers as panelists on his prime time on NDTV.

The issue at hand was manual scavenging.

The issue of manual scavenging is nothing new and every media house and political party are well aware of the same. But even death and ailment of the poor workers fail to move them. Ravish Kumar who is known to be a no-nonsense journalist began his prime time by saying: Humara sheher kaun saaf karta hai hum iske baare mey boht kam jaante hai!

“We know very little about those who clean our city”

Also read: India Could Benefit From Bathroom On Wheels Like In New York

The prime time addressed several issues, problems, and challenges these scavengers face while manually cleaning the sewers. Almost all of them have almost died while doing their jobs. Even though the use of machines has now been started, there is a serious lack of infrastructure and authoritative will.

Naresh, a sanitation worker, revealed that on average a sanitation worker cleans 25 to 30 sewers a day. They land in the sewer holes without any protection mechanism on their bodies such as gloves, or masks. He further stated that he has to clean all sorts of garbage materials by his hands which cause serious infections and diseases.

In a country where sanitation workers are looked down upon and are treated like untouchables, Ravish Kumar called them in a well-lit news studio in South Delhi and addressed them with decency, as he does with any other panelist, whether rich or poor.

Delhi is classist, and so is any other city. We hardly conversate with a sewage cleaner or try to know his realities. Not to forget the extreme care and caution taken to avoid the minutest physical contact while handing out money to them.

Ravish has broken all psychological, societal, and physical barriers by inviting them to the studio to have a discussion.

Whenever some issue is being talked about in the news, journalists invite experts and leaders to share an opinion on that topic. The expert may or may not have ground knowledge, he might only have bookish knowledge or might defend the ideology he affiliates with.

But a sanitation worker has nothing to lose and nothing to gain. He puts facts before the moderator without mixing it with an opinion, because he has no opinion on the issue. He faces the issues and he wants it to be resolved.

To top it all, while Ravish Kumar was having a prime time on the topic manual scavenging, every other news channel on their prime time were talking about a statement given by someone who is now irrelevant. A one-hour debate on few stupid words uttered by someone? #PeakJournalism

Journalists should engage more in such activities of going beyond boundaries and breaking societal barriers. Not only will it help in gaining non-biased trust from the viewers but also in making the world a better place to live in.

How Modi’s Independence Day Speech Was Different Than The Previous Ones: 8 Points

Should We End School Education In Class 11th & Have A Year Gap?