We at ED Times recently got to interview Emraan Hashmi and Shreya Dhanwanthary for their upcoming film, Why Cheat India.

As the official blog partners for the film, we engaged in a fun filled conversation with them which was full of quirks, candid bits and some Koffee With Karan quizzing. 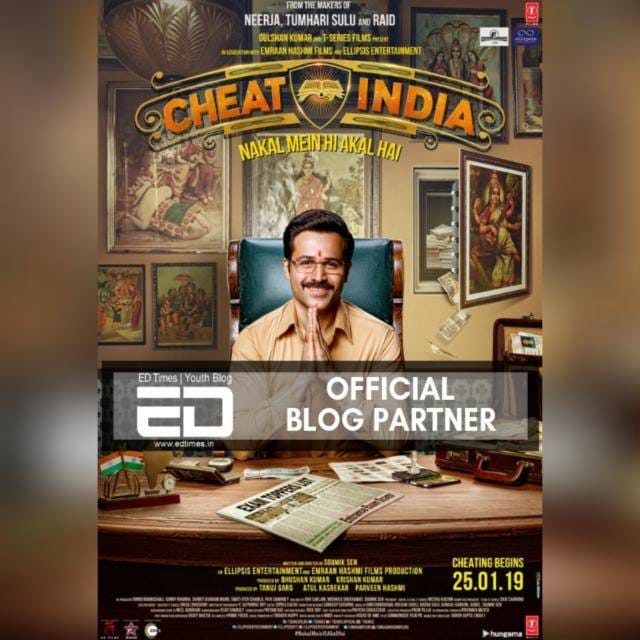 The foolishness of the censor board, personal experiences of cheating, criticisms of the Indian education system and media induced labels were some of the highlights of this conversation.

Here’s checking out a few excerpts from the conversation. We’ve picked up the most juicy bits of the conversation. For the full video which talks in detail about the movie and its association with both Emraan and Shreya, stay tuned for updates from ED Times.

ED: Drawing from the plot of the film, none of us are totally shareef! We’ve all done our fair share of masti and rule breaking in school and college. Toh what is one crazy cheating or rule breaking story that you guys have, to share with us? Starting with you Emraan.

Emraan: Couple of them but I think as far as cheating goes I cheated in my economics exam in my BCOM. I did get a good 69/70%. I was allowed to copy for 40 minutes by the invigilator. We were allowed to get our textbooks in and copy from them. We had a field day.

Shreya: Imagine he still got only 69! I don’t have many cheating stories, because I’ve helped people cheat. I believe in charity. There was this one exam that I remember. The last section of the class was depending on me because I was the only one who studied. I had written my entire paper and I submitted it and I went and there was a collective groan from the class. And I left, but I had enough time to rewrite the whole paper again and then pass it on.

ED: Oh my god. Why weren’t you there in my class?

ED: So now we’ve come to the fun part of the conversation where I’m gonna play a few games with you guys. So I’m gonna start with a rapid fire. Thoda Koffee thoda Karan.

Your best and worse on screen kiss?

E: It’s only the best because it was with me.

E: Best is Mallika and worst, I’m not going to take the name of the lady but it was a classic case of morning breath.

S: Andaaz Apna Apna. All roles. From the rabbit to the background person, I’ll be everything.

ED: What would Emraan Hashmi and Shreya Dhanwanthary be if not actors?

E: I would be in VFX animation graphics. I did a course and then I became this accidental actor.

ED: Have you ever continued to kiss on screen even after the director has said cut?

E: It’s our scene. She was kissing me way after the cut. I was like cut cut cut. I kept on doing this (gestures scissors). She just didn’t stop. But yes, again I wont say the actress’s name but the movie had so many kisses that after a 30 second dialogue, we just went for it and the director is like, this was a rehearsal.

S: You were not supposed to say that publicly.

Also Read: “I Am A Boy And I Like Wearing Makeup”: Jason Arland Shares His Struggles Of Being Himself With ED

ED: Now I’m gonna say a few things and you have to say the first thing that comes to your mind.

ED: This recent trend by actors to have multiple receptions

E: Unnecessary, give it to the poor.

E: To each his own

E: I got my entry through my family, so yeah.

ED: So, now we’re gonna do something around Tinder. I’ll take the names of a few people and you have to tell me, whether you’ll swipe left or right. Right means you like them and left means you don’t. I’ll start with you Shreya.

ED: Now coming to you Emraan. Tell me, right or left.

E: Right. I know you guys were expecting me to say left, but that was the obvious answer. Spread the love.

That’s it for now. For the full interview stay tuned for updates from ED Times!

Do You Know Why A Chargesheet Was Filed Against Kanhaiya Kumar Yesterday?