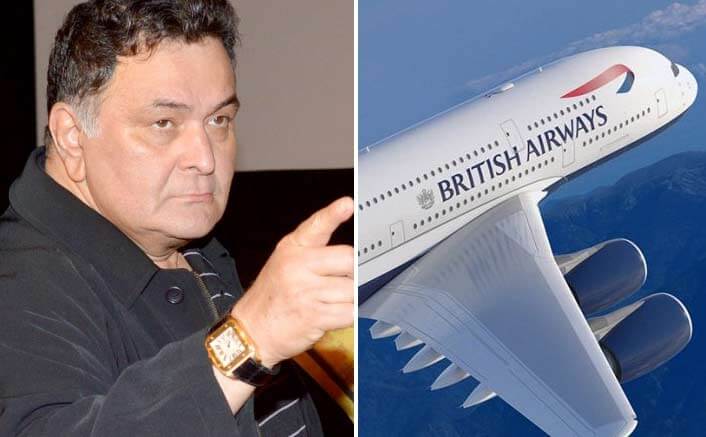 British Airways is currently in news for the allegation of deplaning an Indian family because their child would not stop crying in London.

The father, who is apparently an IAS officer called A P Pathak, has sent a letter to Suresh Prabhu, the Civil Aviation Minister and recounted his harrowing experience with the airline that he called ‘rude’ and ‘racist’.

But interestingly, this is not the first time that British Airways has been accused of being racist to Indians or even black people.

Here, we take a look at some of those incidents:

After the incident with the Indian family came forward, now Rishi Kapoor too slammed British Airways and called them racist along with the advice to fly some other airline.

Kapoor tweeted on Thursday that, “Racist. Don’t fly British Airways. We cannot be kicked around. Sad to hear about the Berlin child incident. I stopped flying British Airways after the cabin crew were rude and had attitude not once but twice even after being a first class passenger. Fly Jet Airways or Emirates. There is dignity.”

Racist. Dont fly British Airways.We cannot be kicked around. Sad to hear about the Berlin child incident. I stopped flying BA after the cabin crew were rude and had attitude not once but twice even after being a first class passenger. Fly Jetair or Emirates. There is dignity.

In 2016, an Anonymous writer on Quora, posted this answer to the question, Have you ever been totally ignored by the flight attendants in first/business class?.

I flew Business Class from Hyderabad – London-Hyderabad in 2016 (very recently).

The flight experience was horrible. One of the crew members was extremely rude for a simple mistake of sitting on the wrong seat. This was even after I apologized to her.

06 F -The seat in which I sat had a defective seat belt, non working TV, attendant bell on the remote not working and a loose arm rest. I saw a few empty seats (at least 6–8) and requested for a seat change to which she did not bother. I had to follow up a few times and the crew member told me that even in those seats the tv’s dont work which was a lie because I saw some of them working. She then pulled my seat belt tight and asked me to bend to check if I was holding on. Actually the seat belt was defective and i had to hold on to the end of the belt to keep it tight. She said I was fine and left !!I was wondering if I was really in business class.

The Quora writer then proceeded to recount another incident that involved a separated lady passenger and someone from the entertainment industry,

There was another Indian lady in Business class who wasnt keeping well on the flight who got similar treatment from the staff. She woke up to go to the toilet and the staff thought she was from economy class and tried to walk her back to Economy. He infact walked her down to the toilets in economy even though there were empty toilets in the Business area!

There was another Indian guy – actually a bigshot in the entertainment industry requesting for a seat change and they royally snubbed him as well.

The same crew members had a pleasant smile when speaking to white folks.

Throughout the flight, I tried to be pleasant and nice to the lady crew member who ill-treated me but she was grumpy.

At the end of the flight, she did not even look at me and was wishing everyone else. She, in fact, blocked my way for sometime before I could leave the aircraft (although I want to give the benefit of doubt to her, I felt it was on purpose once I realised she did not even look at my face) I was on the verge of losing my cool before I realised there’s no point in expressing my anguish after I read on review websites about the poor quality of BA’s customer service and BA not willing to do anything about it.

Same flight – 3 instances. I spoke to all of them after we landed and all of them were really upset and angry.

BA is the worst airline ever in terms of customer service.

I will probably never ever board BA again.

In 2017, a clip emerged, probably shot on the app Snapchat, of a British Airways air hostess called Joanne Wickenden who was saying a lot of really racist things.

In the video, the woman said that, “All right, so all of yous are there getting ready for your Friday night, getting in the predrinks, you know, as you do. And I’m here, getting ready to go to work, put on a yellow life jacket, point out the exits, hand out chicken or beef. What sort of Friday night is this for me?”

British Airways afterward removed her from their employment and the stewardess even claimed that she was framed. Read More: Why Is The Guardian Being Racist Towards K-Pop And BTS For No Good Reason

In 2017, the artistic duo Black Motion were escorted off a British Airways flight after they were first singled out for a downgrade from their Business to Economy seats and then following a slight confrontation, were removed from the flight because allegedly, the captain did not want a ‘911’ situation.

Thabo “Smol” Mabogwane and Bongani “Murdah” Mohosana, were the only black people in the Business class who were asked to give up their seats to a white passenger who had complained of a broken seat.

One of the artists posted about his experience on Instagram,