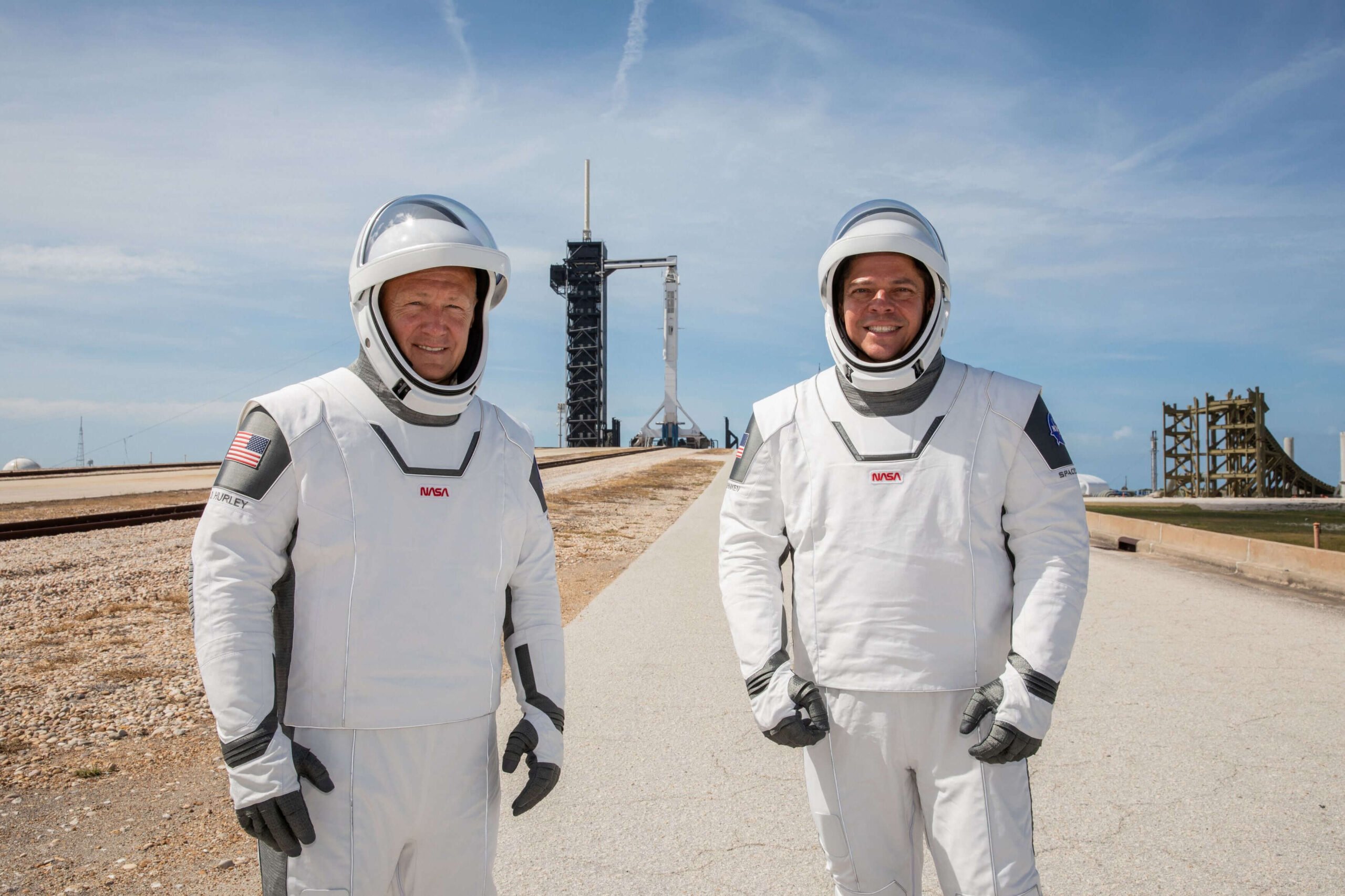 SpaceX, a private American aerospace manufacturer and space transportation services company founded by Elon Musk has once again made history.

On 31st May, Sunday, SpaceX became the first private and commercial company to launch two NASA astronauts in its Falcon 9 rocket out to the International Space Station (ISS).

The launch was successful and the Crew Dragon capsule on top of the Falcon 9 detached as planned.

Reports and experts have called it an entry into a new spaceflight era.

The rocket had two veteran astronauts, Robert L. Behnken and Douglas O. Hurley. Both reached the ISS in a safe condition after a 19-hour journey.

It is the first time that NASA astronauts have been launched from the United States instead of the Russian space program. Ever since NASA retired space shuttles in 2011, it has been Russian who would take American astronauts to the space station. 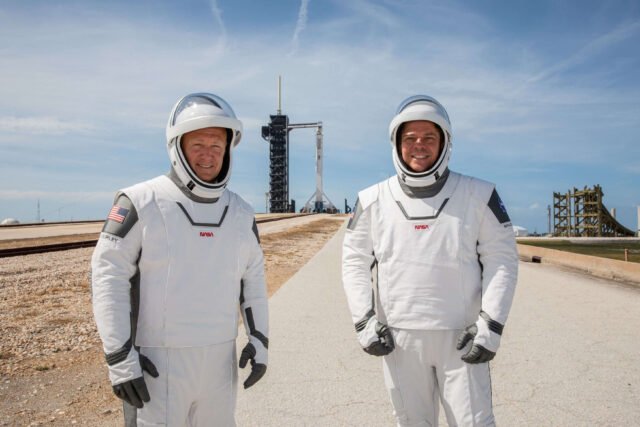 However, for an average Joe, who is not all that well-versed with all things space and rockets, here are some cool facts about this launch that make it so memorable.

Some of them are also from the earlier date of the launch, May 27th, which was postponed due to weather issues in Florida at that time.

It eventually happened successfully on 31st May:

Along with the two astronauts, there was also a third member to accompany them out into space.

That was a small blue sequinned dinosaur plush toy called ‘Tremors’. The toy apart from being cute actually served a very important role, acting as the ‘zero-g indicator’.

This essentially meant that when the toy would start to float around in the capsule, it would let the crew members know that they had entered the zero gravity zone.

The choosing of the toy though has a personal touch. Apparently, both the astronauts Robert Behnken and Douglas Hurley have two sons each and both of them are dinosaur fans.

This particular dinosaur toy was in fact picked by them before their fathers went out into space. The astronauts confirmed its presence on the capsule when they said, We do have an Apatosaurus aboard.

In fact, SpaceX is also selling the ‘Demo 2 Dinosaur’ plush toy on their website for around $25.

the dinosaur was wearing a seatbelt I- #SpaceX pic.twitter.com/Id6eVOSRdY

The spacesuits for this SpaceX launch are extremely innovative and interesting. The gloves to the suit allow the astronaut to control the Crew Dragon’s touch screens.

Along with that, the spacesuits are made to be lightweight, functional and protect the wearer from de-pressurization that can happen during ascent and orbital operations.

The two astronauts, Behnken and Hurley, had a traditional breakfast of steak and eggs.

This breakfast has been a standard for all Apollo astronauts before taking off. The breakfast of the astronauts for SpaceX was not revealed until Hurley himself tweeted a picture of it on 27th May. 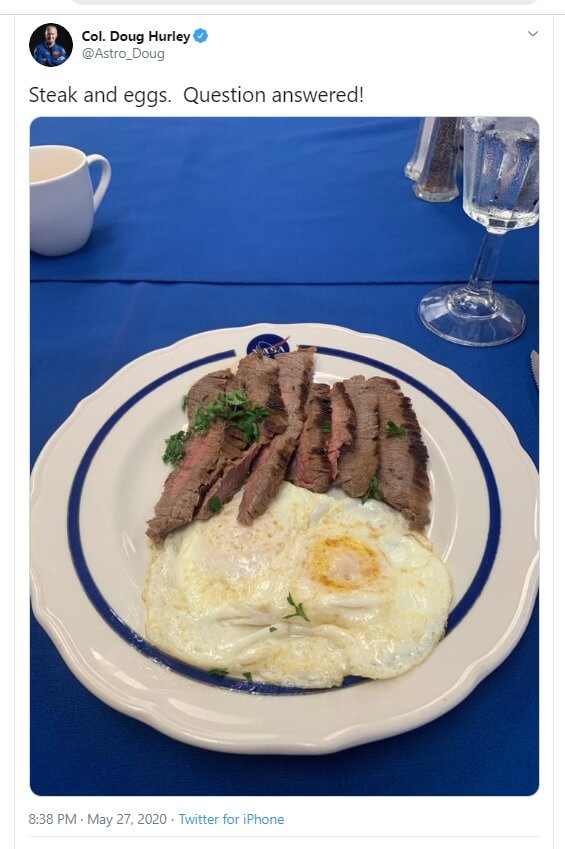 To send the two astronauts off on a good trip, pop artist Kelly Clarkson even did a rendition of the US national anthem.

She performed through a virtual live video broadcast.

Read More: In Pics: Here’s How Dogs Will Be Able To Detect Coronavirus In People Even Before They Show Symptoms

On 27th May when the first attempt happened, reports revealed that the astronauts got to ride in a customised Tesla Model X to the launch pad.

The car not only had the NASA Worm logo on the rear end but even had an interesting license plate. It read “ISSBND” which stood for ISS bound. 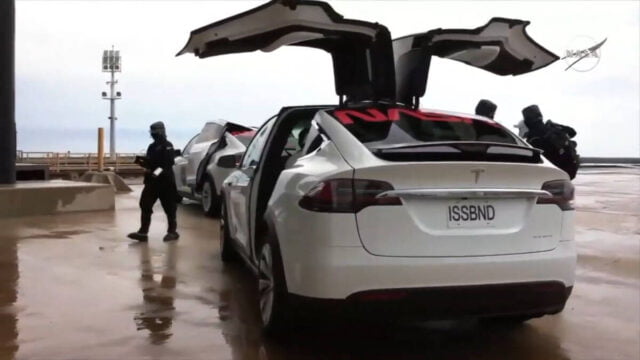 The Crew Dragon capsule, in which the astronauts would be placed is said to not have any buttons or switches.

Instead the capsule will have large touch screens through which they can control and work around the different functions of the capsule.

There is also a life support system in the capsule in case of an emergency.

Apart from this, the capsule is said to be fully autonomous with the astronauts only needing to manually control the system if any malfunctioning happens.

On Saturday the Kennedy Space Center Visitor Complex reopened for visitors to see the launch live.

As per reports the tickets to view this launch attempt quickly sold out and the center’s website stated that only a limited amount of people can come for the live viewing.

It was also informed that the guests would have to wear masks and get a temperature check. 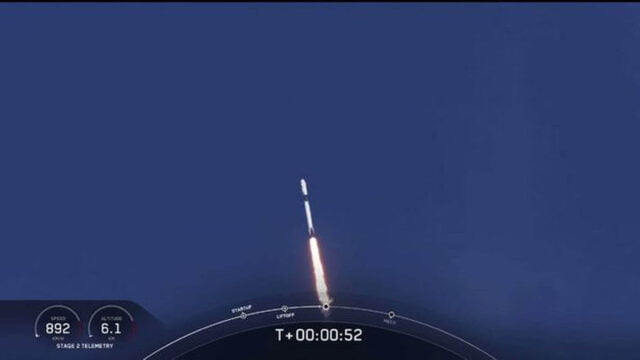 #8. AC/DC For The Astronauts

During the 14 km drive to the Crew Dragon site both the astronauts had an interesting playlist of music.

They began with AC/DC’s “Back in Black” which SpaceX commentator Lauren Lyons explained was because both were ‘back’ on the launch pad 39A since it was shut down for launch in 2011.

NASA astronauts Hurley and Behnken both signed their names on the walls of SpaceX’s White Room right before they were strapped in to the spacecraft.

Apparently this is not a very common practice, something that was reiterated by retired NASA astronaut Leland Melvin who commented in the live commentary, “Yeah, we didn’t do that.” 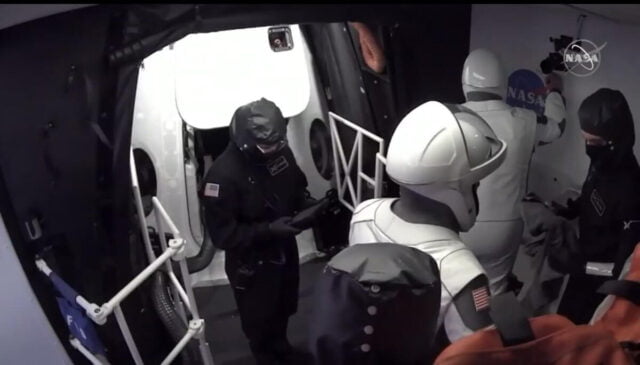 The last NASA launch to occur before their Space Shuttle program shut down was on 8th July 2011.

After that they usually had their astronauts use the Soyuz spacecraft in Russia to get to the ISS.

Almost 9 years later the US has once again launched astronauts from their own soil.

According to reports, the Crew Dragon along with Behnken and Hurley will stay at the space station for anywhere between six and sixteen weeks. They will be working on experiments and maintenance of the station.

SpaceX along with starting regular operational missions for astronauts to ISS later this year also plans on having Crew Dragon space tourist trips for regular passengers some time next year.

Policy Suggestion By A Millennial To Reduce Communal Violence In India

Social Opinions Darshna Kumar - October 12, 2021
India has an exhaustive history of communal tension between Hindus and Muslims. Thousands of people have lost their lives due to communalism, right from...