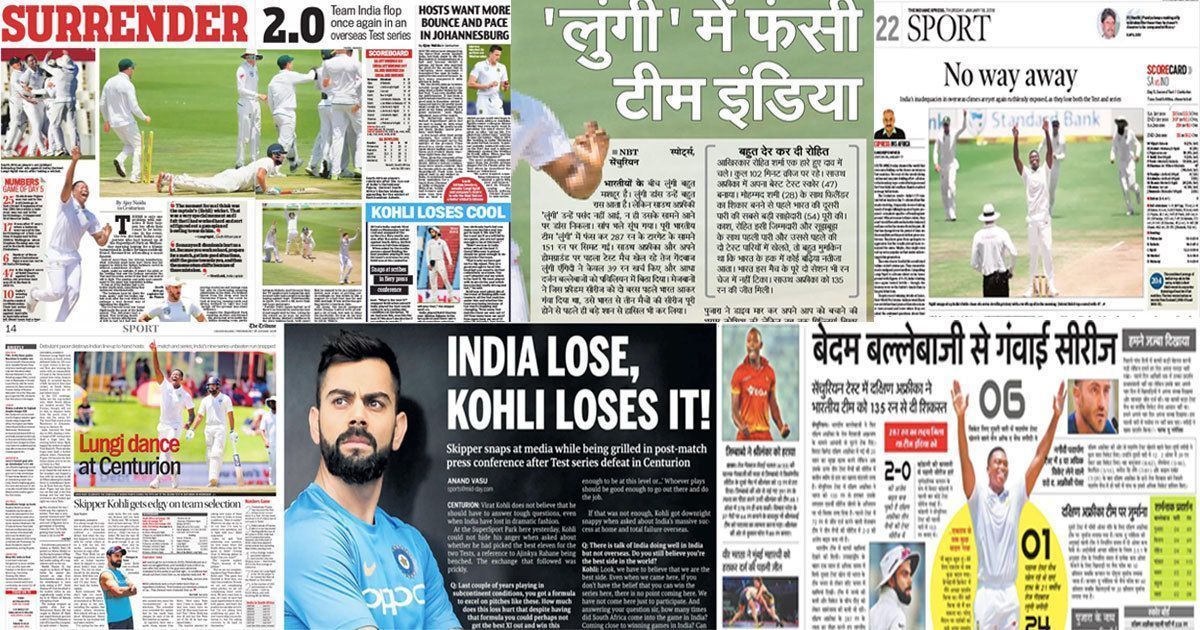 It was a sorry yet usual sight to see India crumble under pressure on foreign pitches as they lost to South Africa yet again in the ‘Freedom Series’.

Kohli was handed his first series loss and to no one’s surprise, it came on the shores of South Africa.

“150 odd means nothing now that we have lost the series. If we had won, even a 30 would have mattered more. Having not won the game, personal milestones do not matter at all. As a team, you want to win collectively. We tried but we weren’t good enough, especially in the fielding department. That’s why they are the winners,” said Kohli. (Source: IndiaToday)

Now, without much ado, let us look at the reasons behind India’s dismal form at South Africa-

One of the reporters rightly pointed out that frequent changes in the starting 11 might be one of the reasons for India’s downfall. I do understand that India has been winning most of the test matches in the past 2 years based on this strategy but it has proved to be inefficient in this test series where we have been pitted against a quality side like South Africa and not Sri Lanka or West Indies.

I did not see any point in dropping Dhawan and Bhuvi for the second match. Kohli might have his own reasons to do so but it definitely was proven wrong. Stick with the same eleven rather than breed inconsistency.

2. A Frivolous Series Against Sri Lanka Before Coming To South Africa

Kohli might say that they were adequately prepared for the test series but the fact is that the Indian batsmen still seems to be in ODI mode which has led to their downfall. The way Pandey got out in the second innings at the Centurion is symbolic of the carefree attitude of the shorter formats. Skipping a practice match didn’t help them either. (Source: Quint)

India might have some fantastic outfield fielders but when it comes to the slip cordon, we are woeful.

Also, the injury to Wriddhiman Saha didn’t help matters as Parthiv Patel performed poorly both with the gloves and the bat. Hands down, Saha is the best wicketkeeper in India. The inability to find a suitable replacement and to keep going back to veterans like Patel and Karthik is hurting us quite a lot. Also read: This Time Its Neymar Who Has Been Targeted By ISIS

Being an ardent cricket fan, I don’t remember the last time when the bowling outperformed our batting department in South Africa specifically. I clearly remember the match when Sreeshanth had wrecked havoc in Johannesburg but other than that, there were none.

The bowlers have done a fantastic job but our batsmen have let us down. Other than Kohli, no one has performed remarkably well. I personally had a lot of expectations from Pujara but two run outs in the same match are unforgivable, to say the least. Vijay who has probably been India’s most consistent performer in foreign pitches has disappointed one and all.

I don’t want to sound critical because we have not been outplayed in either of the test matches. We have performed considerably well but have lacked the killer instinct, not built up long partnerships and have been poor in the slip cordon.

Anyways, it’s time to back our team because there is no two way about the fact that this team is better than most other Indian teams to have toured abroad since the Ganguly and Dravid era and we can definitely salvage pride by winning the last match.