Kabir Singh was already a much awaited release, with it being the Hindi remake of an extremely popular south Indian movie ‘Arjun Reddy’ and Shahid Kapoor as solo lead after quite some time.

Fans were excited to see how these two combinations would work and considering Shahid’s earlier work with Kaminey, Udta Punjab etc, the film was predicted to be brilliant.

But while the movie is killing it at the box-office, giving Shahid Kapoor the highest opening day collection for his film and earning around Rs. 136 crore in the first week itself, the audience and critics are bashing it for glorifying problematic themes like toxic masculinity, misogyny, violence and more.

The most realistic part about Kabir Singh movie was that Kabir and Priti were shown studying for her Anatomy exam from BD Chaurasia's Human Anatomy, instead of Grey's Anatomy

Kabir singh is an example of pure bullshit and glorification of Toxic Masculinity#KabirSingh pic.twitter.com/wGaIeWWR0y

However, in the midst of this whole thing, Shahid Kapoor, the actor who is the face of the movie and character, has not said anything regarding all this criticism.

I came across various social media posts of his, where he is dancing and partying, basically having a good time with his family while remaining totally silent on the uproar regarding the movie.

Instead he is posting about how his film has earned Rs. 20 crore on opening day 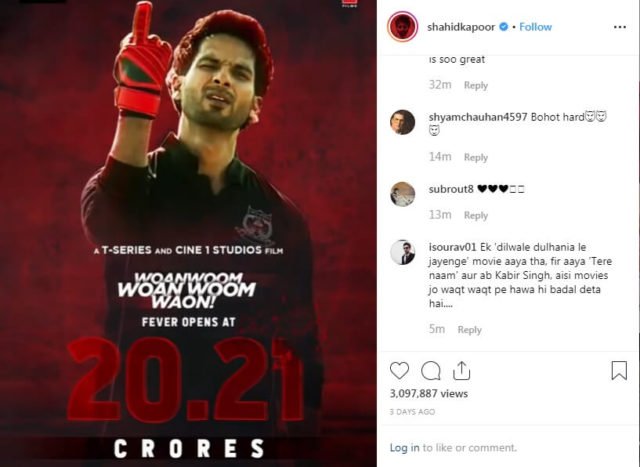 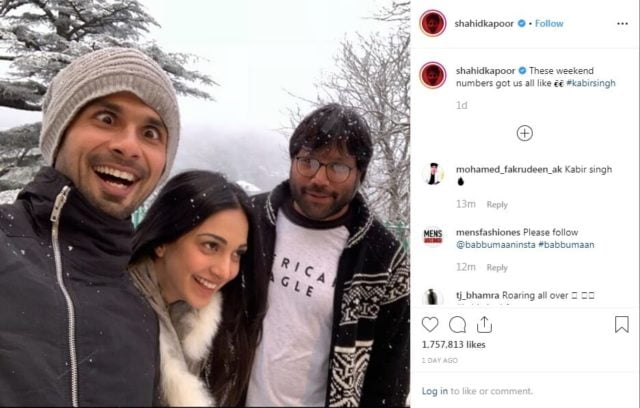 Or dancing while a caption with ‘aaj ki party inki taraf se’ is there on the video. 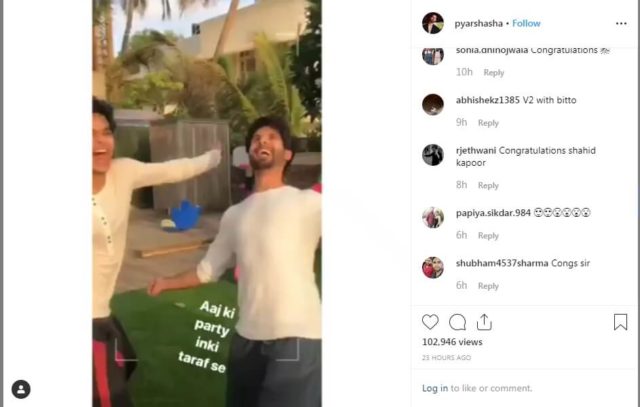 Now, don’t get me wrong, there is nothing wrong with him celebrating the success of a film that is earning so much money.

And even his acting is getting good reviews, however, what I do have some trouble understanding is how nonchalant and stoic Shahid is showing himself to be with all this.

Okay great, his movie got into the 100 crore club, but what about beyond that?

I do wonder if this is the kind of solo 100 crore movie that he wants to be proud of and willingly show off to his kids when they grow up.

Because it seems to me that although he might have acted like this violent, ballsy hero in the movie, the irony is that in real life the spine to even acknowledge, forget taking any action, about the elephant in the room is missing.

To me, as a fan of Shahid Kapoor and who usually likes his movies, all this celebration, while pretending to be oblivious to the criticism, is just making him look like an insensitive person.

Read More: FlippED: Are Celebrities Right For Using Their Personal Lives To Promote Their Movies? Our Bloggers Fight It Out

Let me give a clear comparison between the backlash and the tone-deaf Instagram and Twitter of the actors.

On one side, we have the reviews and comments about how disturbing the treatment of the movie and portrayal of the character of Kabir Singh is. 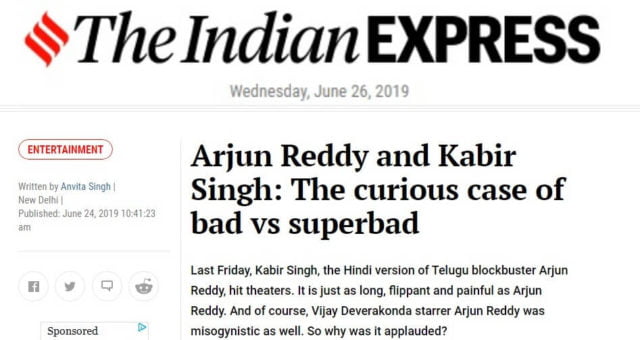 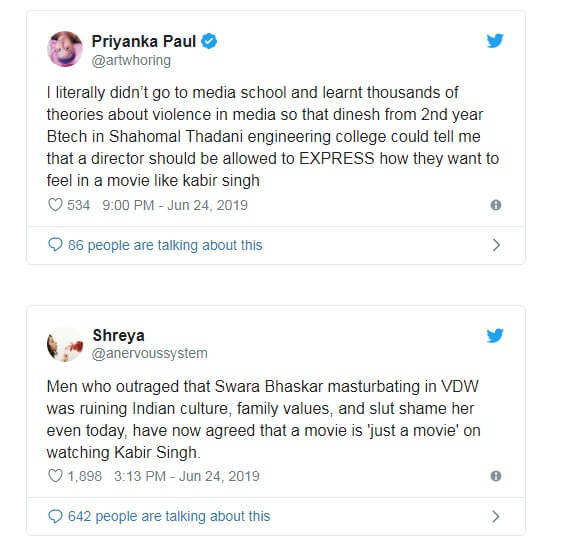 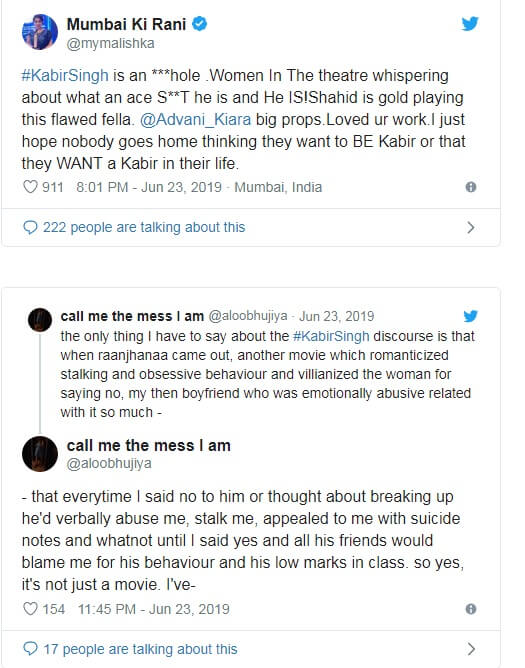 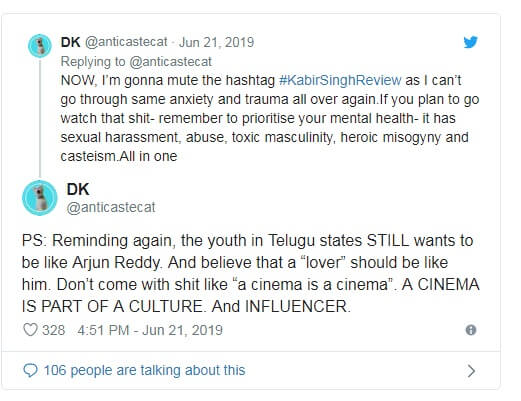 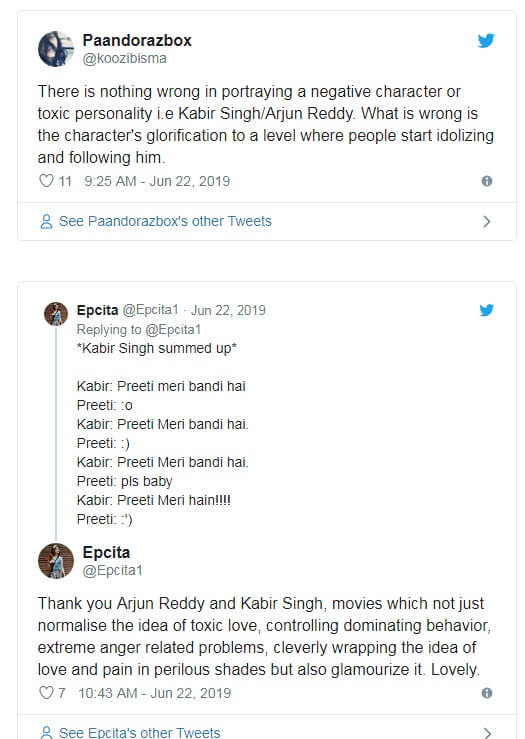 Not just the articles, but recently, TV actor and CBFC (Central Board of Film Certification) member Vani Tripathi Tikoo also talked about the movie and the problems it has. 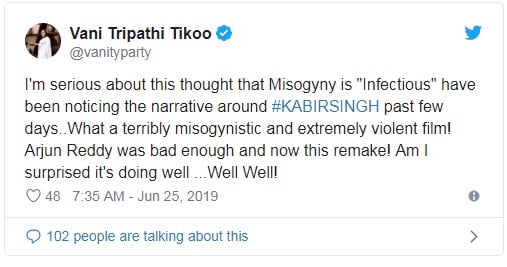 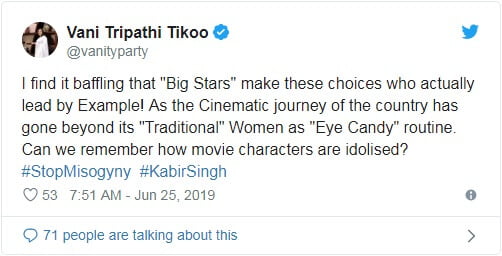 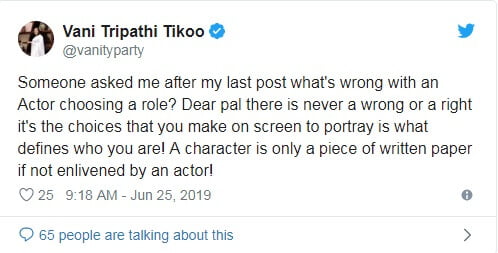 On the other side, we have the completely stoic and tone deaf social media of Shahid Kapoor and Kiara Advani. Especially Shahid who is constantly tweeting and retweeting on Twitter posts from fans and Bollywood box-office accounts.

It seems he is insistent on repeating how much money the movie is collecting and how much love people are showing to it, as if that will automatically counter the discomfort people are experiencing or how the undue glorification of the character is not good in today’s time. 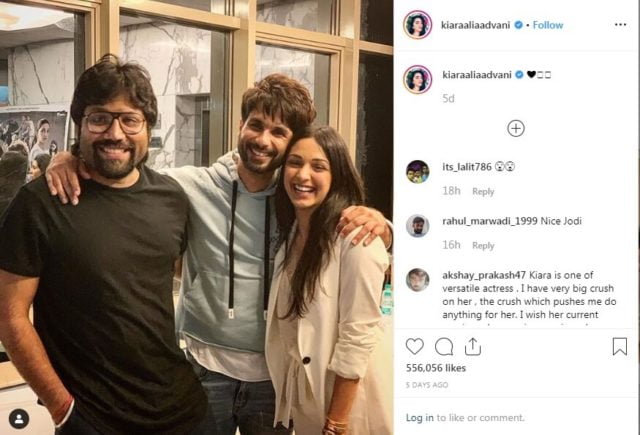 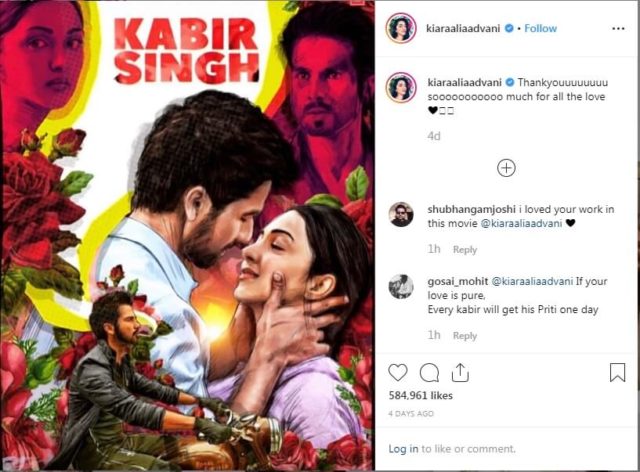 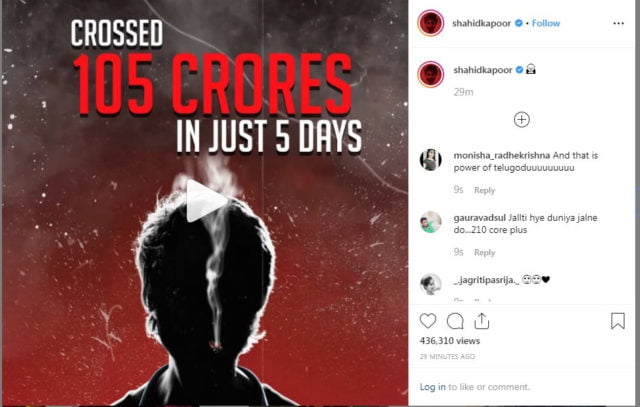 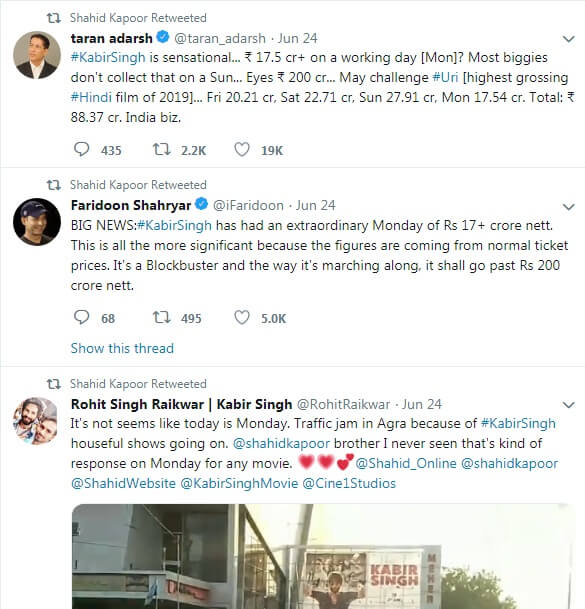 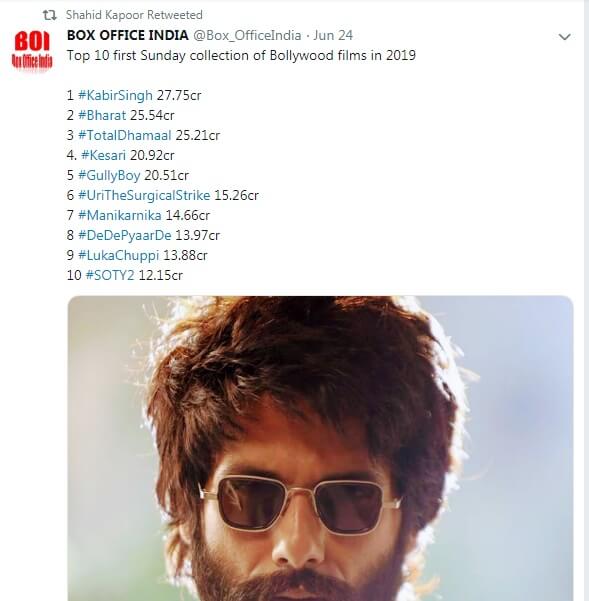 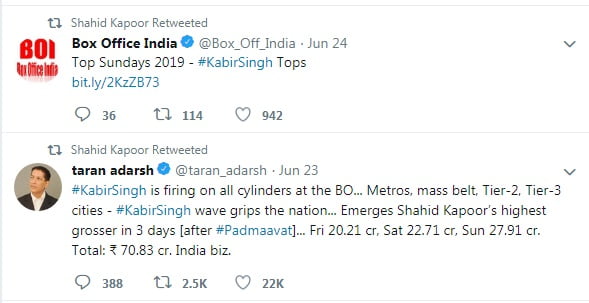 Shahid, I noticed has been consistently tweeting Taran Adarsh’s tweets of how much the movie has earned till now for almost 2-3 days.

I also recently came across an interview of Shahid, where he was asked how it was playing such a tough character, and he said that, “I don’t look at my filmography or my work as an actor anymore as an individual performance. I have grown over that.”

“Jab aap shuru mai aate ho to aapke har performance pe aap sochte ho abhi log kya bolenge, kya bolenge (When you come in the beginning you are affected by people’s comments on your every performance). I have been doing this for 15-16 years now. I have done about 30 films. For me now it is to put back a body of work behind so that when people see that, they see a variety of work. The larger picture is important. Am not affected by ek mahine, do mahine ke liye jo comments aate hai that is not important.”

He further commented on how people comment now that, “Jab We Met wo aisa tha, aur Kaminey mein usne waise kiya (in Jab We Met he was like that and in Kaminey he did that).”

So basically, what I inferred from his statements was that, the character is not important to him. It is just how much diversity he can show in his filmography at the end of the day.

How he can show to people, that see, I did so many different roles in my acting career, wow so diverse, so different.

The character or what it is saying to the society or how it’s impacting the people is not important to him is my observation.

Which is sad to realise about an actor that I genuinely used to admire for his talents.