“Graffiti is one of the few tools you have if you have almost nothing. And even if you don’t come up with a picture to cure world poverty, you can make someone smile while they’re having a piss.”

-Banksy, Banging Your Head Against a Brick Wall

Street art is slowing gathering unfeigned attention in India. It begins with the artistic stroke, transforming the blank walls into a mural.

There goes the tag of the author at the end. And voila, it’s done!!

The untamed essentiality of street art lies in the three qualities – spontaneous, public and fleeting. You have to run deeper than seeing street art as a mere platform to transform public spaces into visual artwork.

Traversing through the challenges and risks that come with illicit artwork, street artists are taking the modern art form to a different level. It’s just not about the punks wielding aerosols and vandalizing public property anymore.

The more mature and humanist level I am talking about is encouraging people to feel better about themselves every day.

Yes, even if it’s in the form of a smile while you are having a piss.

Here’s a listicle about the street artists in India who are bold and creative enough to continue this aesthetic trend.

You can still be impressed without buying their artwork. Just buy into their dreams that tell people to move on and be strong every day !!

Ranjit Dahiya started a quirky art project, called the BAP (the Bollywood Art project ). He aims to make the essence of Bollywood accessible to the common man through visual representation.

The mural of the angry young man from Deewar takes us back in time to the times when hand-painted posters and flyers of movies flourished.

The first fire station to be painted in India in honour of the brave #firefighters who are always ready to put down their life to #save ours. The artwork is all set to heat up the cool and pleasant weather of Pune with the #firefighters ready to cool the heat. A collaborative artwork between #Yantr and #Inkbrushnme for #Punestreetart. #streetart #indiastreetart #punestreetart #graffiti #wildstyle #wall #wallart #pune #india #mechanicalart #yantrindia #yantrstreetartproject

This street artist’s byname “Yantr” means machine. His singular eclectic style revolves around the complexity of machines and organic forms marking social issues he is passionate about.

This piece was installed in Mumbai in honor of the brave fighters who risk their lives in danger to douse out flames and save humanity. The fire monster looks like a bad-ass villain ready to stamp out of this wall art and engulf our minds in the burning flames of mechanical life. 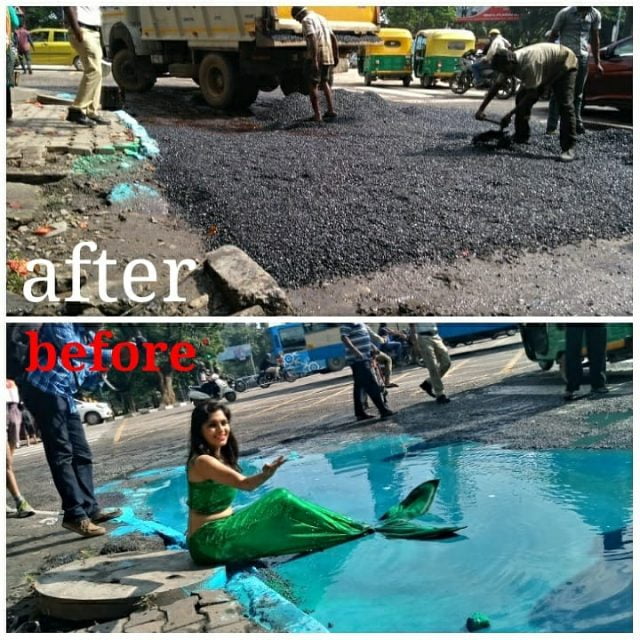 When the pothole menace is met with apathy from the Government, this visual artist from Mysore, Baadal Nanjundaswamy used art to bring attention to potholes which have been staring at people for a while now without any action from the Bangalore Municipal Corporation. Apparently, his intervention gets civic issues fixed quickly.

You May Also Read: 8 Strange Breast Products For Women

Guesswho, the Kochi-based artist has been creating a buzz as India’s Banksy behind satirical images depicting cultural oddities and gender stereotypes.

If you are looking at the above white-washed mural and trying to connect the subversive connotations, you can understand how we are too keen to judge others than actually understanding them.

Anpu Varkey who initially began as a painter is known for her signature cat-themed murals.

This art project of hers is called the Dragon Fish. The undulating scales in a mix of black and white presents an all-embracing caricature style that is either printed on comic strips or storybooks.

"All the women in me are tired" You are here (with me) as two powerful words reverberate: #metoo The Tamil word ‘vali’ has several different meanings depending on the context in which it is used. Vali means ‘pain.’ Vali (pronouned slightly differently) can also mean ‘path.’ When we start to move along the path that is our pain, we begin an inward journey that takes us through our changing emotional landscapes- until we finally cross a threshold, and we find ourselves in a different place. With recognition can come the possibility of transmutation. Share with me- an open letter, life experience,remedy, poem,poster, pathway from pain. How have you found space for healing?

In solidarity with the hashtag that became a rallying cry against sexual harassment, Shilo Shiv Suleman’s mural aims to etch the inward journey that we experience along with our path of pain.

The changing emotional waves that calm down as we cross a threshold and become strong. As we find ourselves in a different place, we undergo transmutation. We have a shot at this new burst of life with a motley of experiences buried deep inside. 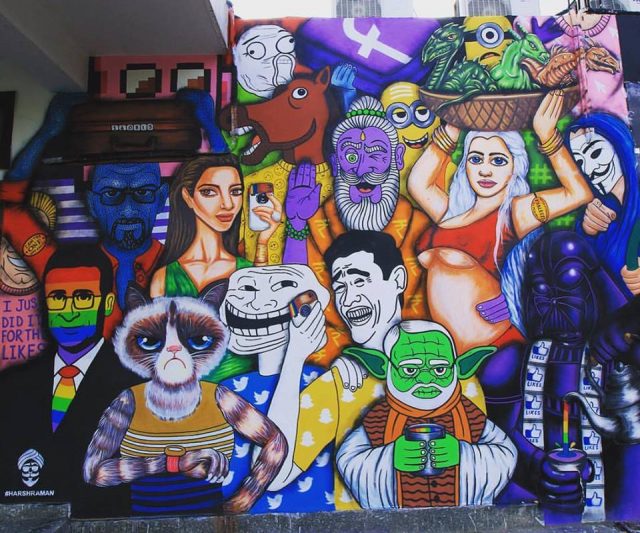 Harsh Raman is a Delhi-based Graphic Designer who has transformed the dull and drab buildings of Delhi into things of beauty.

This graffiti above brings you a lot closer to your imaginary friends when the real ones aren’t around.