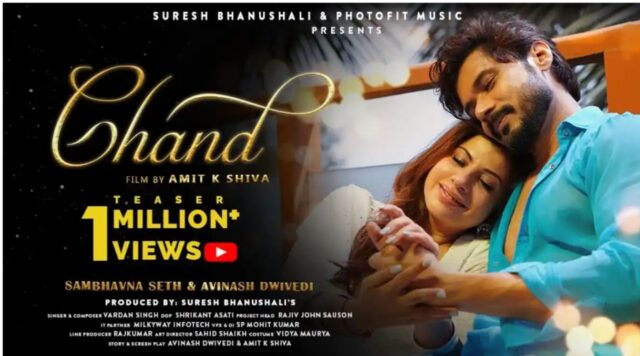 The Teaser of the song Chand, produced by Suresh Bhanushali and Photofit Music Company ft. Sambhavna Seth and Avinash Dwivedi is receiving unparalleled support from fans The Music video of Chand featuring the much-loved couple on-screen Sambhvana Seth and Avinash Dwivedi has received unparalleled support from their fans, and the teaser of the song has been loved all over the internet. The sensational couple has portrayed that adorable love chemistry on screen. The real-life duo Sambhvana Seth and Avinash Dwivedi share that unmatched love bond that can be evidently seen in the teaser of the song “Chand” produced under the banner of Photofit Music Company. The teaser is receiving a lot of love from the fans, they are clearly praising their chemistry on the screen, the song has that beautiful backdrop of the one-day festive Karwa Chauth.

What adds more to this vibrant music video is the picturesque location and the romantic essence, where the song has been shot by director, Amit K Shiva. We can assure you that this song will surely be a magnificent treat. This project of the karwa chauth themed song “Chand” backed by Mr. Suresh Bhanushali and the team of Photofit Music Company, sung by the supremely melodious Vardan Singh, crafted the vision into inch-perfect reality by Mr. Amit K Shiva.

The fans are now excited for the song as the teaser has created that romantic vibe all over the internet, they have picked the teaser and have already started creating those catchy reels on the song, however, the entire music video of the song “Chand” will be released on October 20th, as per the record label Photofit Music Company, and the excitement can be already seen. The glorious project was headed by Mr. Rajiv John Sauson, taking this soulful song “Chand” produced by Photofit Music Company, higher than ever with 360-degree strategy. Implementation and making it a consistent move. The song ignites the era of romance, being one of the biggest soulful songs on the charts. The record label, Photofit Music Company has produced several major hits In the near future, the photofit music company will be coming up with feature films and music albums in various genres, says “Rajiv John Sauson, Photofit Music Company.

This new romantic song “Chand” will surely be a treat for all the couples that captures the true essence of the festival Karwa Chauth, welcoming you to experience the era of romance and narrate that unmatched tale of love.