On Sunday, Shilpa Shetty posted on her Instagram about how she apparently had a racist encounter while flying from Sydney to Melbourne.

In her post, she recounted the whole ordeal and stated that she was discriminated against and had to face rude behaviour by the staff at the Sydney airport because of her skin colour.

The incident revolved around her cabin luggage that Shetty was carrying and how a Qantas Airways (apparently the airline Shetty was flying by) lady staff created a fuss about her bag being ‘oversized’ when she was at the check-in counter.

The lady who, as per Shetty’s post, is named ‘Mel’ declared her bag as oversized and thus had to be checked-in from another counter. When she went to the counter for oversized luggage, the person at the desk informed her that her bag was not oversized and could be checked-in normally.

This back and forth along with the allegedly rude and curt manner of the staff at the counter irked Shetty who due to time constraint had to then get it checked-in from the oversized luggage counter only.

This should get your attention!
Travelling from Sydney to Melbourne and at the check in counter met a grumpy #Mel (that’s her name) who decided it was “OK” to speak curtly to “US” (Brown people!!) travelling together, I was flying business and had 2 bags (my allowance)and she insisted and decided my half empty Duffel bag was oversized (to check in!!)

So she sent us to check it in at the other counter dealing with “Oversized luggage” .. there a Polite lady (yes this one was) said ..“this ISN’T an oversized bag, pls check this in manually if u can at another counter” (all this happening while the counter is going to shut in 5 mins)

As the manual check in wasn’t going thru for 5 mins (we tried) I went upto #Mel and requested her to put the bag thru as her colleague said it wasn’t an oversized bag.. She refused again.. Just being adamant especially when I told her this is causing a lot of inconvenience ..

We had no time to waste so we ran to the oversized baggage counter and requested her to put the bag through which she did after I told her that #Rude #Mel had issues !!!…. to which another colleague joined in an reiterated my duffle wasn’t oversized and could’ve easily been checked in.
The point is ..

This piece is only for #qantasairlines to know and take cognisance .. that their staff must be taught to be helpful and TONE can’t change with preference to #COLOUR .

“WE” are NOT #pushovers and they MUST know that being #callous and #Rude will NOT BE TOLERATED.

Ps: Please tell me if that bag in the picture is oversized??!! 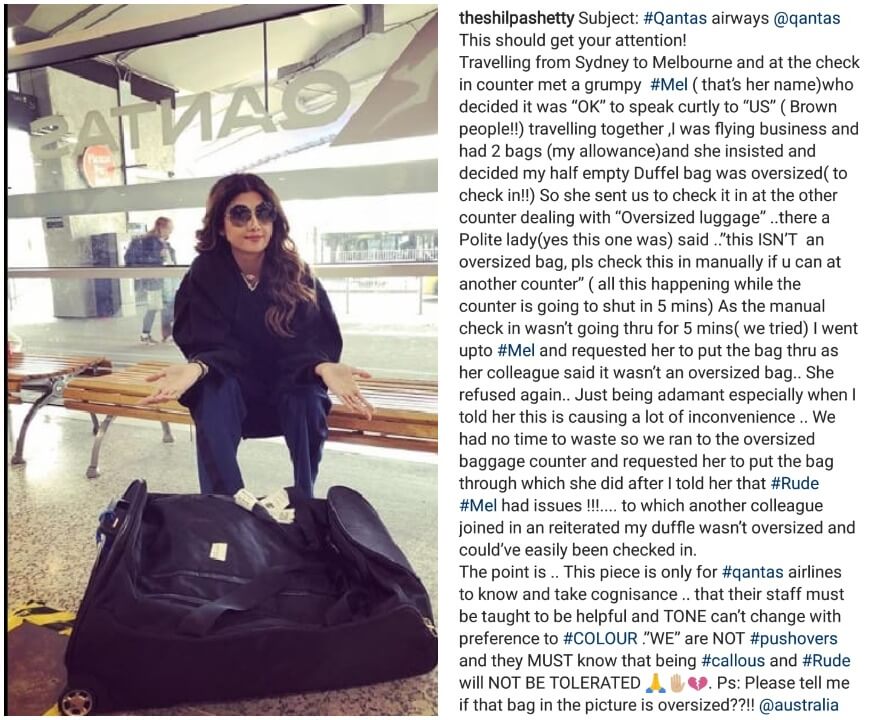 However, being a frequent flyer myself, after reading the whole incident, I am unable to figure out where the racism exactly was.

The lady staff was incredibly unprofessional and could perhaps be throwing her weight and power around, but the racism aspect is not exactly clear.

Not to say that the lady couldn’t have been racist too, but the thing is that these incidents happen more often than you’d think.

Here I take a look at some other instances that have happened that ended worse than what Miss Shetty’s did:

#1. Naivety Is Not Excepted At Airports

A friend recently told me of an alarming incident they were witness to at the Indira Gandhi Airport some time back, when an entire group of people was unable to check-in for their flight even after standing in the line.

The flight was of Air India and apparently, the group was not exactly expert flyers or perhaps did not know the ways of the airport, that you can ask an official to skip the line if your flight is leaving soon and need to check-in asap.

That group, however, kept standing in the long queue, and by the time they reached the counter, check-in for their flight was already over and they were told to return back.

Here even though the airport staff was at fault, since it is their responsibility to announce flights whose check-in is closing soon and that any passengers who are in line for that particular flight should come to the front, it was the group which had to suffer and missed their flight. 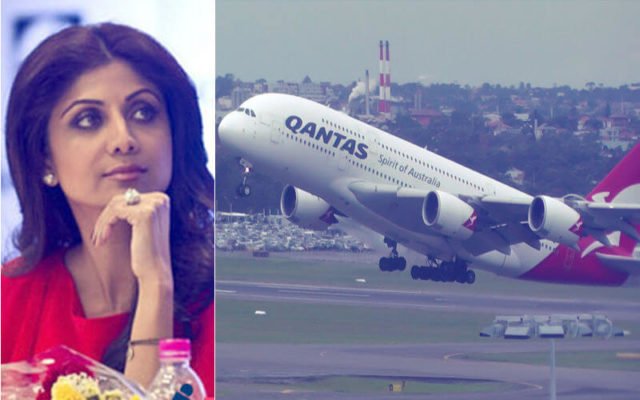 Read More: Here Are Some Supposed Incidents Where British Airways Was Racist To Indians

This is something that happened to me personally, a few years back while I had gone with my family for a vacation to Singapore.

Even though we had reached the airport on time, some last minute issue at the check-in counter delayed us to get to the boarding gate on time.

Unfortunately, the gates had just closed, maybe 1-2 minutes before we reached and the lady at the gate absolutely refused to let us pass. Even though it was an Indian airline and my father himself works for that very airline, we were not allowed a little bit of leeway.

The plane had not even detached from the airport yet, meaning if she had allowed, we could have boarded her flight, however, she would just not budge.

We ultimately saw our flight take off in front of our eyes without being able to do anything.

An acquaintance recounted this harrowing incident that they experienced when flying by an airline called Air Deccan.

Touted as one of India’s first low-cost airline, Air Deccan at that time had just launched or at least was still quite new, as per the source.

My acquaintance was taking a flight from Delhi to Jammu for a trip to Vaishno Devi and had reached the airport dot on time. But it was only a minute of delay for her to cross the line and reach the counter itself, when suddenly they closed check-in for her flight.

Mind you, my acquaintance was only 17 or so years old at the time and this was her first time flying alone.

Even though she pleaded and cried to the staff at the counter, they kept saying “no, sorry ma’am, we will not be able to give you a boarding pass” like a broken record.

She then wandered around the airport almost in tears and terrified as to what exactly she will do now, when the Jet Airways officials finally came and tried to calm her down.

After hearing of her situation, they offered to help even when their entire Delhi to Jammu circuit was full. Eventually, she was able to acquire a jump-seat to her destination but it was only after many trials.

So Ms. Shetty, don’t say you’ve never dealt with a difficult situation or blame it on racism because terrible behaviour doesn’t necessarily have to be racist.

It isn’t always motivated by racism.

In fact, your reaction to instantly blaming this on ‘racism’ and making such a big deal of a bad experience or dealing with someone who is just creating hurdles in your seamless travels, just shows that you are not humble enough to deal with instances where people are rude to you.

It seems that your privileged thinking has blinded you from something that happens with every frequent flyer, at least you finally got to board your flight.

Also, welcome to the real world ma’am, this is exactly why you should keep time at the airport for such contingencies no matter who you are.

These things are very normal and regular. Bad and rude behaviour is something we all deal with at any/every place.

Is The Tennis Fraternity Being Racist Towards Serena Williams For No Good Reason?