The recent ban on tennis star Serena Williams’ suit has sparked outrage all over social media with people calling it out as not only sexist but also racist.

A few days ago Bernard Giudicelli, the President of the French Tennis Federation in an interview with Tennis magazine said that “It will no longer be accepted,” referring specifically to the black catsuit outfit that William wore last year.

Giudicelli then further said that, “I believe we have sometimes gone too far. You have to respect the game and the place.”

Williams who has 23 single grand slam titles to her name has on previous occasions stated how wearing the outfit has made her feel powerful and like a ‘superhero’, since the suit is not just about fashion but has medical reasons too.

In May at the French Open, the 36-year-old Williams also said that “It feels like this suit represents all the women that have been through a lot mentally, physically, with their body to come back and have confidence and to believe in themselves,”

And along with that she referenced to 2017 hit Black Panther by calling it her “Wakanda-inspired catsuit,” which just goes to show how special the suit really is for her. 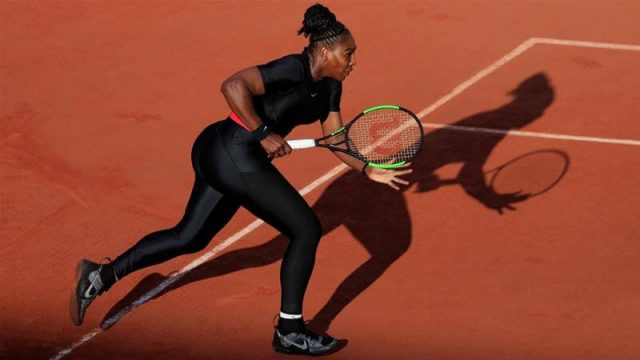 What Is The Reason Behind The Suit?

One must understand that it is not simply a fashionable catsuit that Williams has to wear, but something that helps her with her blood clots.

Nike, Williams’ sponsor, specially designed the suit for her after she suffered from pulmonary embolism due to blood clots while giving birth to her daughter last year in September. Williams almost experienced a life-threatening condition because of that and the suit helps to avoid the clots from forming.

The compressions help with the blood circulation and prevent blood clots from forming thus allowing her to play without any problem.

A lot of people on social media have called out the ban as sexist and racist that is trying to police how black women wear clothes in certain fields.

Let's call this French Open restriction on Serena Williams for what it is- racist and sexist. Arbitrary dress code policies have been disproportionately used to target Black women in schools, at work and now on the tennis court. This is the unfair policing of Black women's bodies https://t.co/kbMbLSHF2a

Just ridiculous. Serena has done nothing BUT respect the game. Serena Williams is almost always singled out in tennis. This comes down to what they feel is “acceptable” on a tennis court. It’s not her job to make you feel comfortable.
Also, the suit helps her combat blood clots. https://t.co/gR2XqJLi3j

Serena Williams wears all black is singled out by French Open president for criticism and has outfit banned from major Grand Slam pic.twitter.com/28ZES1riX4

Read More: I, As A Young Marathi Guy, Experience Casual Caste Based Racism From People My Age Pretty Often To Ignore It

For a player of Williams’ stature who is called one of the greatest tennis players of all time and also featured in the Forbes’ list of highest paid female athletes, this is not the first time she is being targeted.

In July this year only, Williams tweeted questioning the random drug tests that she has to go through.

…and it’s that time of the day to get “randomly” drug tested and only test Serena. Out of all the players it’s been proven I’m the one getting tested the most. Discrimination? I think so. At least I’ll be keeping the sport clean #StayPositive

According to reports, it has been revealed that this year itself Williams has been tested 5 times by the U.S. Anti-Doping Agency which is more than any other U.S. tennis players both male and female.

Serena Williams has returned to the game after almost a year break that she took for pregnancy, the complicated birth and maternity leave.

Williams was quoted saying about these multiple drugs tests, “I never knew that I was tested so much more than everyone else,” and added that, “It will be impossible for me not to feel some kind of way about that.”

To be fair, it has also been said that as per the agency’s “intelligent” out-of-competition testing program, it is common for multiple drug testing to be done on top athletes who see a constant success in their career.

But one has to wonder whether the fact that Williams is a black woman who is currently the biggest name in a sport that is majorly filled with white players has anything to with it.

The Top 5 Greatest Wimbledon Moments Of All Time (Video)