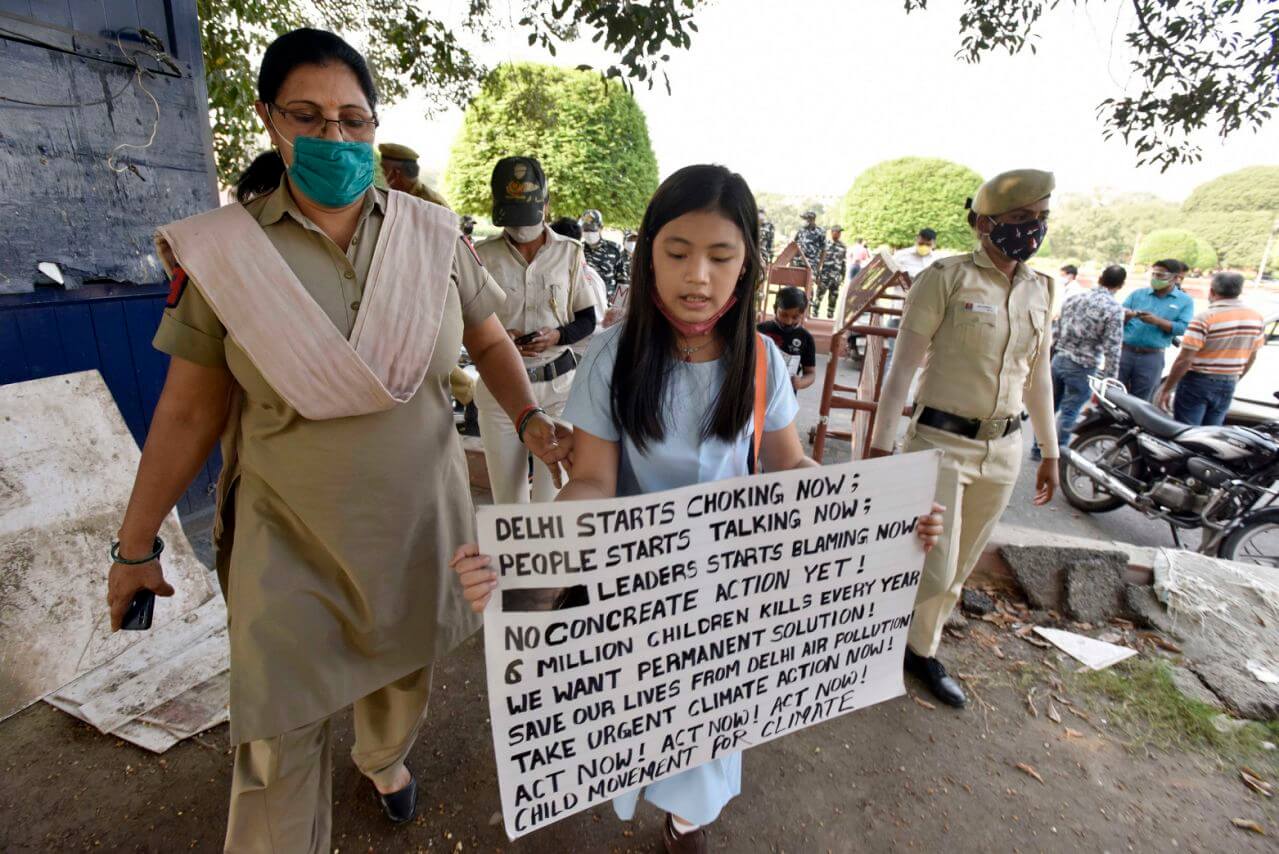 Protesting is a right and privilege that is given in a democratic country like India to all its citizens.

As per the Indian Constitution, the Right to Protest comes under Article 19(1)(a) and Article 19(1)(b) that allow an Indian citizen freedom of speech and expression and the right to assemble peaceably and without arms respectively.

So it was a little disconcerting to learn that a 9-year-old climate activist from Manipur, Licypriya Kangujam and 12-year-old Aarav Seth were detained by the Delhi Police outside the Parliament House.

It is reported that both were protesting against the growing air pollution in Delhi and wanted better care to be taken by the Indian government regarding the environment.

On Sunday, that is 18th October 2020, Kangujam and Aarav were both protesting outside the Parliament House, Delhi about the inaction by the government with respect to growing air pollution.

Both the kids held large hand-made posters talking about their concerns. It was then that they both were “briefly detained” by the Delhi Police.

Kangujam’s Twitter handle kept the people updated on what was going on, later revealing that at first, the police tried to take the kids to the Parliament Street Police Station, but ultimately dropped them off at Jantar Mantar.

Her Twitter handle posted about it on October 18th, commenting on the number of police officers who came to their location to detain small 9 year and 12-year-old children.

In another tweet, the Twitter page posted how Licypriya Kangujam was taken to an untraceable location by the police. It is said that Kangujam and Aarav were detained for around 40 minutes. 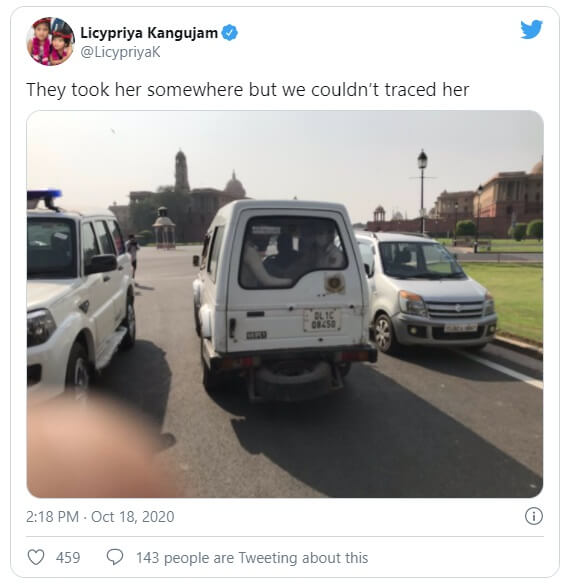 Not just the police officers from Delhi Police were there, but apparently, Central Industrial Security Force personnel were also called to handle the situation.

The police dropped them off after warning that they would be arrested if they again protested outside the Parliament House again.

I and @LicypriyaK were simply protesting on the road sides because of the inaction of our leaders on the ongoing #DelhiAirPollutionCrisis. Now they have released us at Jantar Mantar. Initially they tried to take me with @LicypriyaK to Parliament Street Police Station. pic.twitter.com/13sKYVgmt6 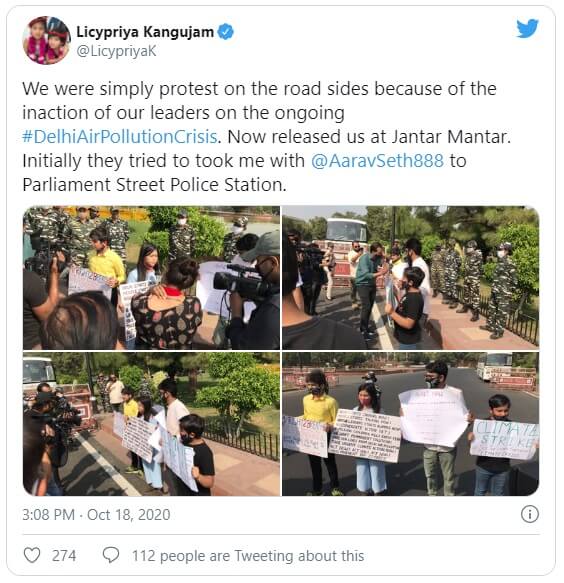 Although Kangujam did tweet out that the police officers treated her nicely and like a ‘daughter’ almost, reports also state that the reason they detained the two kids was because they were protesting at a high-security zone.

This seemingly puzzled Kangujam who tweeted that, “My only mistake was I protested in the most highly restricted security zone of India. Anyway, they released me without any conditions after sometimes in Jantar Mantar. But usually, I protest every week there as a routine campaign to give awareness to the people on climate change.”

Many people also reacted to this on social media, condemning the Delhi Police for their actions. 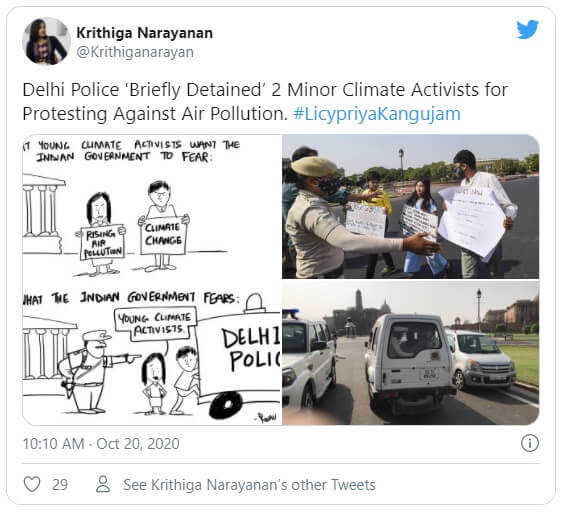 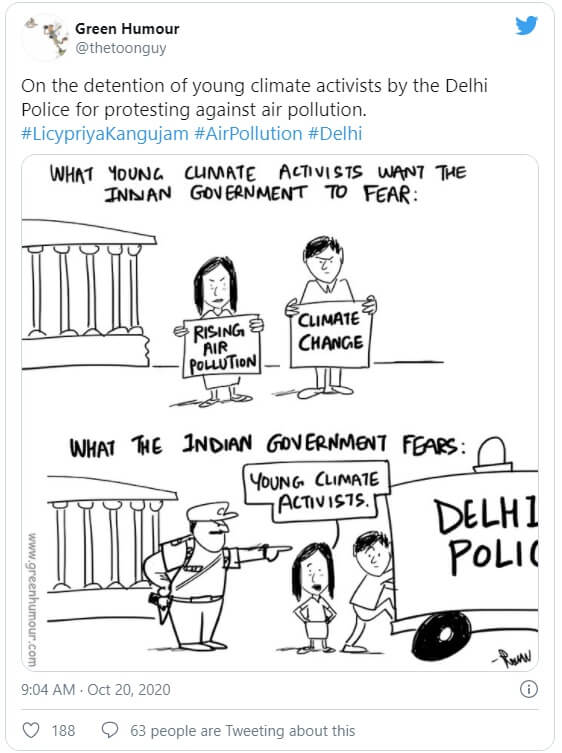 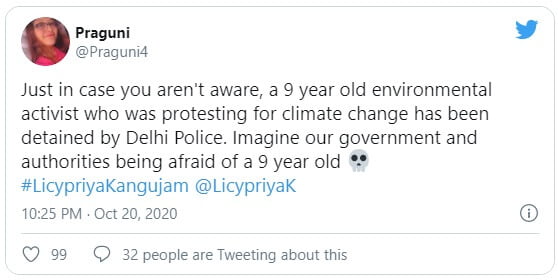 Is it something to wonder about what the state of raising questions on those in an authoritarian position is becoming these days? How much can you question in a democratic country before you are hauled away by other forces for raising some important points?