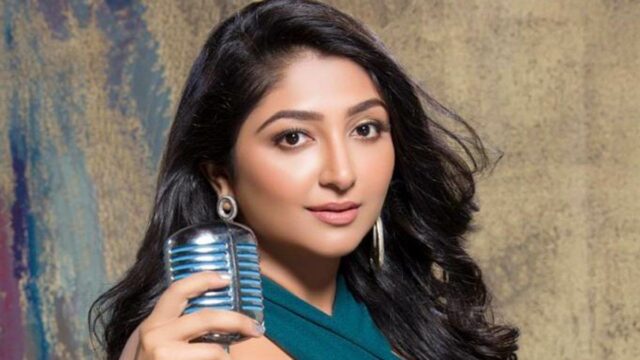 We connected with the ace singer through a telephonic interview and got more deets about the song.

The kind of progress and the level of momentum certain industries today are experiencing only makes us wonder what could have been the reasons behind their exponential rise. Well, there could be innumerable factors, but no one can deny the hard work, resilience, and passion certain individuals and professionals work within their respective industries.

We cannot go without mentioning the excellence the Indian music industry has shown over the years by opening doors of incredible opportunities for promising new talent and also for those who could take the industry to new levels of success.

Doing the same in the world of music is one such high-performing and passionate singer, Bhoomi Trivedi, the Gujarati girl with a golden voice, who has sung for many Bollywood heroines and have only given hit tracks like “Ram Chahe Leela” for Priyanka Chopra, “Dance ke legend” for Athiya Shetty, “Udi Udi Jaye” for Shah Rukh Khan and Myra Khan, “Husn Parcham for Shah Rukh Khan and Katrina Kaif, ”Vaagyo Re Dhol” from film Hellaro which one the National award last year.

This time too, she came up with Rashmi Rocket, the upcoming new film of Taapsee Pannu (to be released on Zee5) and gave her magical voice to the song “Ghani Cool Chori”.

We connected with her through a telephonic interview and asked her a few fun questions. So, let’s see what she has to say.

Ghani Cool Chori is the newest track on the list, and the kind of response it is already getting is getting me “Ghani” overwhelmed, I would say. What can I say about this beauty of a song, which has been created with all heart by the one and only Amit Trivedi sir. He is the magician behind it, and all of us team members have put in all the efforts to make it a huge hit. Amit sir explained Taapsee’s character in the film to make me understand the nuances of the song and took me deep into the character. Lyrics by Kausar Munir has added charm to the song, and people are humming it everywhere.

Song “Chand” produced by Suresh Bhanushali and Photofit Music Company is all over the internet hits 1 million views, featuring couple of glam Sambhavna...

First astrologer to carry out Vastu of the public sector company,...