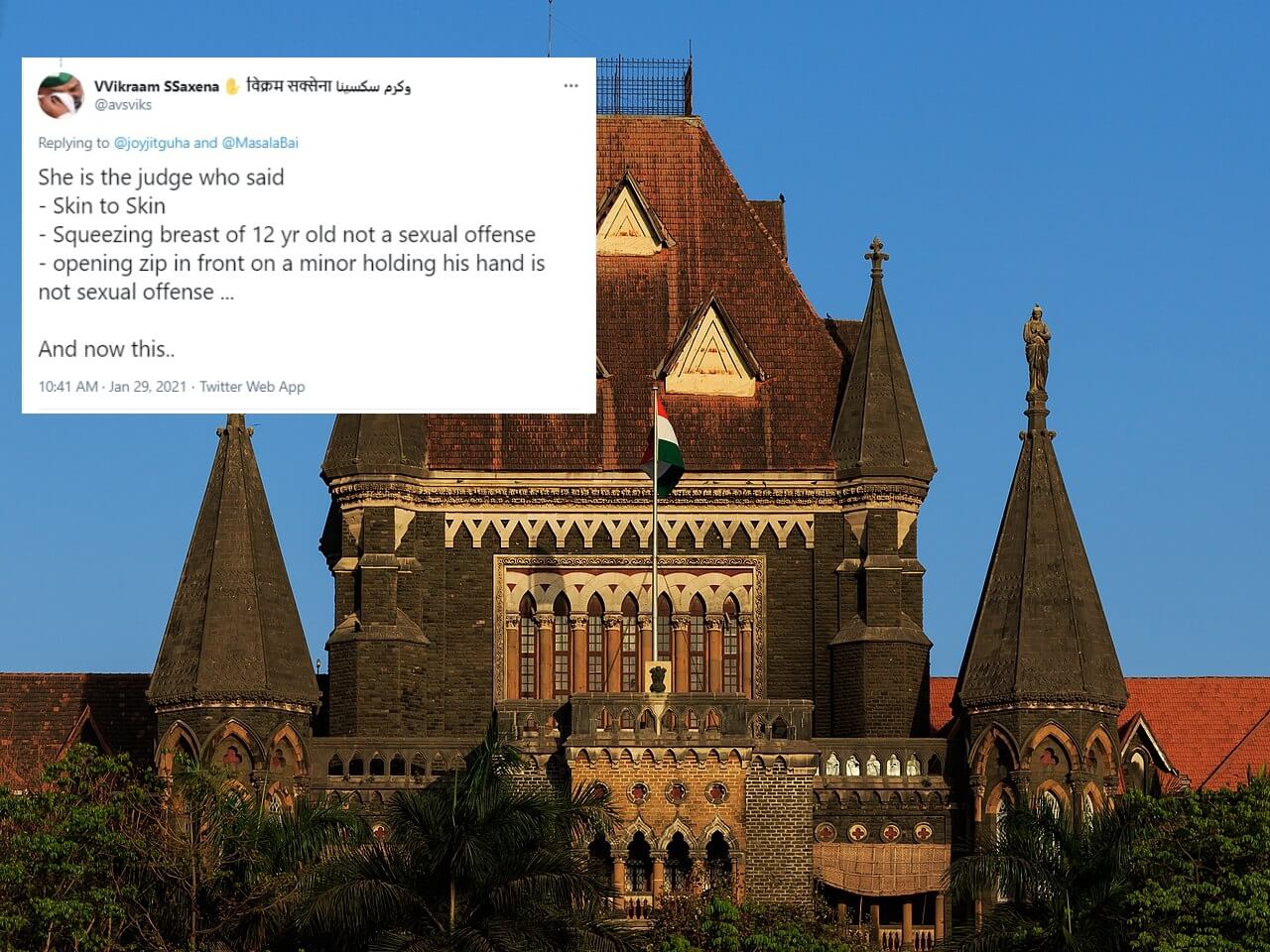 A female judge from the Nagpur bench of Bombay High Court has been in the news for all the wrong reasons.

Some of her recent judgements have brought about a lot of criticism from people. Earlier in the month, the Bombay High Court had modified the ruling against a 39-year-old man who was sentenced to 3 years jail time for sexually assaulting a 12-year-old.

As per a Hindustan Times report, the ruling by the single-judge bench of Justice Pushpa Ganediwala essentially said that merely groping a minor’s breast without skin to skin contact cannot be called sexual assault.

As per the judgement passed on 19th January 2021, for an act to be considered as sexual assault, there must be “skin to skin contact with sexual intent“.

The judgement stated that “The act of pressing of breast of the child aged 12 years, in the absence of any specific detail as to whether the top was removed or whether he inserted his hand inside the top and pressed her breast, would not fall in the definition of sexual assault.”

Although, the verdict did add that “the act of pressing breast can be a criminal force to a woman/ girl with the intention to outrage her modesty” is punishable under IPC section 354 with a prison time of 1 year as opposed to the 3 years the accused would have gotten under the POSCO Act.

However, Justice Ganediwala is again making news for her recent judgement on another case that comes under the Protection of Children from Sexual Offences (POCSO) Act.

What Did The Lady Judge Say?

On January 29th, reports came out about the latest verdict given by Justice Ganediwala for a 2013 case.

In her judgement, she acquitted 26-year-old Suraj Kasarkar who was charged with the rape of a 15-year-old girl.

The mother of the minor girl had lodged a rape complaint against Kasarkar in 2013.

She was hearing an appeal against the verdict that had been given by a special trial court of 10-year imprisonment for the accused.

Upon hearing the accused’s case, the bench as per reports stated, “It seems highly impossible for a single man to gag the mouth of the prosecutrix [the victim] and remove her clothes and his clothes and to perform the forcible sexual act, without any scuffle. The medical evidence also does not support the case of the prosecutrix.”

The victim in her initial case had told the sequence of events as “It was the time of 9.30 p.m. At the relevant time, I was lying on a cot in my house. My younger brother was sleeping on the ground. My mother had been to natural call out of the house. At that time, accused Suraj came to my house under the influence of liquor. He gagged my mouth and not allowed me to shout when I tried to shout. Thereafter, he removed his clothes and also removed my clothes from my person.”

However, in the initial case, while the prosecution could prove that the accused had raped the victim and criminally trespassed into her house, they were unable to prove that the victim was a minor, that is, below 18 years of age when the incident took place.

In the latest hearing for the appeal against the initial judgement, Justice Ganediwala, as per a report from NDTV, stated that the original testimony by the victim “does not inspire the confidence of the court as the incident, as narrated, does not appeal to the reason as it is against the natural human conduct.”

She also said that “Had it been a case of forcible intercourse, there would have been a scuffle between the parties. In the medical report, no injuries of a scuffle could be seen. The defence of consensual physical relations does appear probable. In cross-examination, the defence could bring on record the probable doubt with regard to consensual relations. In her cross-examination, she has admitted that ‘it is true that if my mother had not come, I would not have lodged report’.”

Finally, reports reveal that Justice Ganediwala retracted the original verdict and said, “As per settled law, stricter the sentence, stricter the proof is required. No doubt, sole testimony of the victim in rape cases is sufficient to fix the criminal liability against the accused, however, in the instant case, considering the sub-standard quality of testimony of the prosecutrix, it would be a grave injustice to send the appellant behind the bar for 10 years.”