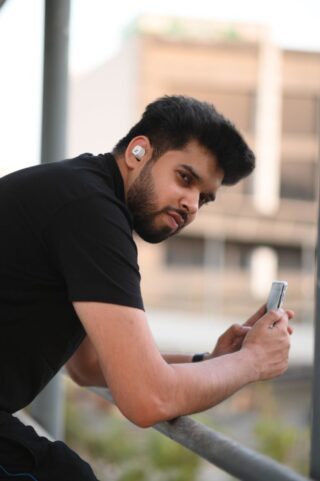 As they say, the journey of thousand miles begins with a single step. It fits perfectly on Mr. Shivaditya Barjatya. He is a digital marketer, content creator, entertainer, and influencer marketer as well. He is the one who has left no nook or corner to give it all it takes to be successful and trending in his game.

As he recalls, ‘travelling’ has been something that has always excited him ever since his childhood, and at the age of six or seven, it used to be quite fun and relaxing going on trips with his parents. Jaipur was the first travel trip that Shivaditya remembers of and that too because it is pretty famous with ‘Pink City’ in Rajasthan, India. It was also his father’s favorite. Jaipur has a rich history of a clan of rulers who lived in magnificent forts and palaces, and thus the city has its royal touch.

Shivaditya recalls the memory with nostalgia and explains how beautiful it was going on trips those days and traveling in Jaipur. He with his parents used to roam around the historical places and monuments. Even at such an early age, what traveling inculcated inside him was the value of understanding one’s own culture and equally getting to know about our history and cultural heritage. A sweet memory of those times that he still cherishes is about the movie’s release, which was quite a blockbuster hit in Bollywood titled ‘Rang De Basanti.’ Shivaditya was then allured and captivated by his visit to Jaipur and seeing Nahargarh Fort and Nahargarh Bawdi, which are pretty famous. Nahargarh means ‘abode of tigers,’ and both these places standstill as an example of the fascinating and enchanting beauty of Jaipur.

Mr. Shivaditya Barjatya believes in creating a legacy, having a path he made for himself by his own choices, and thus labeling himself as ‘Wanderluster’ is not his thing. Still, he believes in discovering new places and exploring as much as possible, which speaks in high volume about his inspiring character. He considers this excitement that he has for exploring and discovering new places, which he inherited from his father because he loved traveling and exploring. Shivaditya’s childhood was entirely about listening to new places, the places which he never heard of at that early age of six.

Hearing of new places and monuments used to be fascinating for him even at that point, starting from Udaipur – City of lakes to Konark. He still remembers how marvelous it used to feel and that zeal is one thing that has not changed in him ever since. It was more or less like the answer to his passion, which led him to travel and explore more over the years. Shivaditya believes that one of the significant benefits of discovering and exploring new places is finding and maintaining inner balance. Too often, we get wrapped up in our lives, our daily routine of working, sleeping, eating, and living that we lose the balance within ourselves; traveling changes that and gives us a new perspective about life.

The curiosity to discover new places is not just about the place itself. It involves an amalgamation of embedded culture the site consists of in the form of local cuisine, clothing, ambiance, music, art, and many more. Traveling helps you get out of that comfort zone and teaches so many things about life that you can only learn by experiencing things. New people, new places, and traditions help people broaden the horizon, and that in many ways shaped the personality of Mr. Shivaditya Barjatya.

The success story of Anirban Mitra, how he became a successful Musician & Digital Marketer

Travel Nandini Mazumder - July 29, 2021
Dholavira, a city in Gujarat has been inscribed as a World Heritage Site by the United Nations Educational, Scientific and Cultural Organization or UNESCO.  In...

Campus Prachi Sharma - July 24, 2021
As Goldman Sachs anticipated, India will face the worst recession of all times. Fresh graduates will face a huge blow as various sectors are...