Applying for internships can always be challenging for students, even without the obstacles that the pandemic poses. It can be difficult to stand out amongst the crowd and market yourself as a worthy candidate when so many others try out for the same position.

So, to impress employers and show one’s creativity and individuality, people have resorted to unconventional methods, leaving behind boring resumes, just to grab the attention of big companies.

One such individual is 21-year-old Avkash Shah from Mumbai, a 3D Graphic/Motion Designer whose impressive 3D video on LinkedIn managed to win over the employers at CRED, landing him his dream internship. 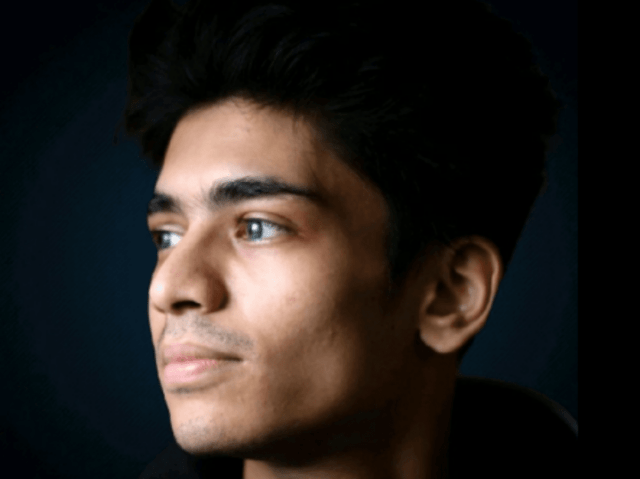 Avkash’s video on LinkedIn took the internet by storm with his out-of-the-box thinking and creativity. The caption for the video stated that he wished to intern at CRED, and the video was his application for the same.

“I figured that if I was going to apply, I’d make something worth it. It pays to be good,“ he added.

CRED, the credit card payments company, has been well-known for its innovative ad campaign ideas. Hence, it’s no surprise that Avkash’s chance at getting recognized by the company based solely on his creative thinking did not go to vain. 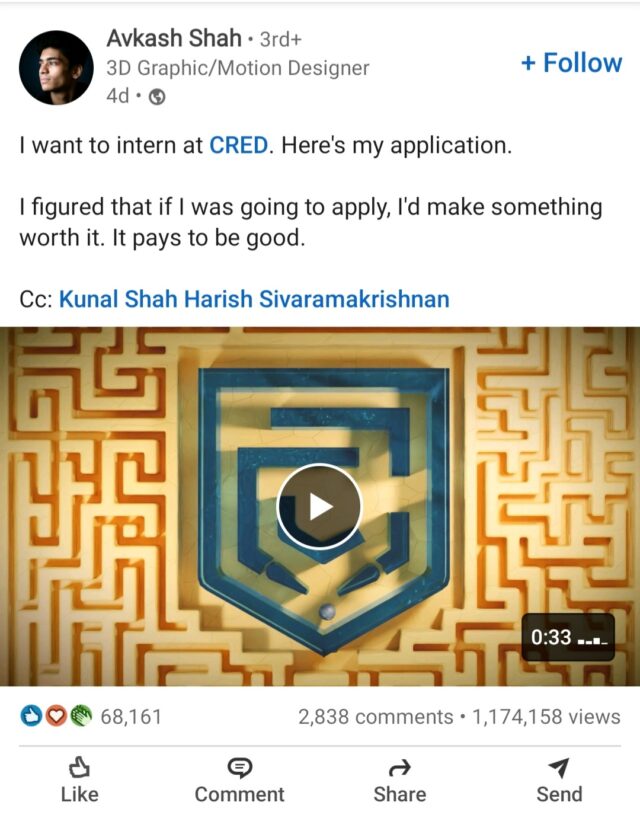 The post garnered an incredible response from LinkedIn users, with over 1 million views on the video in just four days of him posting the video online.

The video primarily focused on showcasing his impressive motion/graphic design skills and included reasons why he would be a great candidate. The video featured some of his previous creations as well as a revamped logo for the brand.

The company’s Head of Design, Harish Sivaramakrishnan, immediately offered him the internship by responding under his post saying: 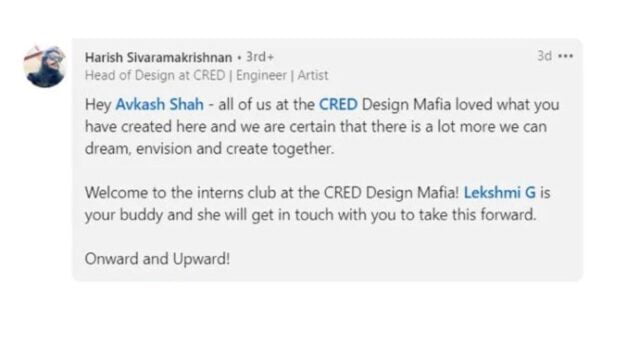 “Hey, Avkash Shah – all of us at the CRED Design Mafia loved what you have created here, and we are certain that there is a lot more we can dream, envision and create together. Welcome to the interns club at the CRED Design Mafia! Lekshmi G is your buddy, and she will get in touch with you to take this forward. Onward and Upward!“

He even managed to receive a comment saying, “It pays to be good” from the company’s Founder, Kunal Shah!

The video gained much popularity on LinkedIn and was soon featured on LinkedIn’s official page as well.

Netizens lauded Avkash for his brilliant efforts and his unique take on applying for an internship. He even managed to get job offers from other companies that were ready to give him a position immediately.

Some users speculated that this method of applying for jobs might soon grow popular on social media sites due to the immense success that this graphic designer was able to receive. But this isn’t the first time that an individual has used such means to land a job.

In 2017, college graduate Dawayne Kirkland impressed a digital agency in New York by making a video of him rapping his achievements and traits in place of a standard and boring resume.

Creativity and innovative thinking surely have a way of making people stand out in a crowd!

FlippED: Should All Internships Be Paid: Our Bloggers Fight It Out