On early Friday morning news came out that the Telagana Police had to kill the 4 accused men of the Hyderabad rape case in an encounter.

As per the police the four accused all between the between the age group of 20 to 26 were taken to the crime site for a reconstruction of the crime scene when they apparently tried to flee and the police had to fire on them.

This happened around 3.30 am on 6th December 2019 and as per PTI a source stated that “They fired upon the police team and we retaliated in self-defence. Two of our men are also injured in the incident.”

The men were accused of rape and murder of a 25 year old woman who was returning home at night on her scooter. They allegedly lured her in with the offer to help her after her vehicle broke down, smothered her, then raped her and burnt her body.

This encounter has had a wide array of reaction with many people celebrating the police for giving justice to the victim while others are pointing out how this was against the law and not in accordance with human rights.

Here we take a look at what those opposing reactions by some famous names of the country were: 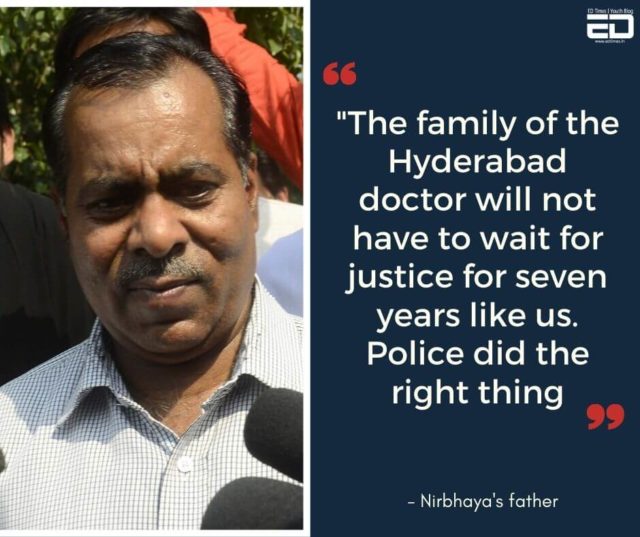 The parents of Nirbhaya, the tragic victim of the 2012 Delhi gang-rape and murder case, have sided with the police and applauded them for the encounter.

While her father believed that the parents of Disha of the Hyderabad case got justice in time and didn’t have to wait 7 long years, the mother appealed that no action be taken against the police.

“For seven years I have been waiting, going from court to court, making rounds of lower court asking to hang them, but the court said they also have human rights, can’t hang them. But it’s needed today,” she also said. And further added that, “Something has changed today with the action by the Telangana Police. I am very happy.” 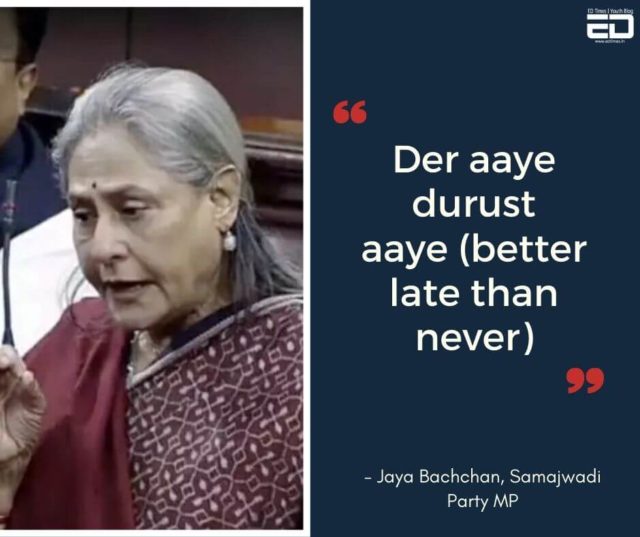 Jaya Bachchan, the Samajwadi Party MP has been very vocal about her stand regarding this whole case. Not long ago she asked that the accused be given to the public as they deserve some punishment like public lynching or worse.

While walking from the Parliament, she gave this statement to reporters. 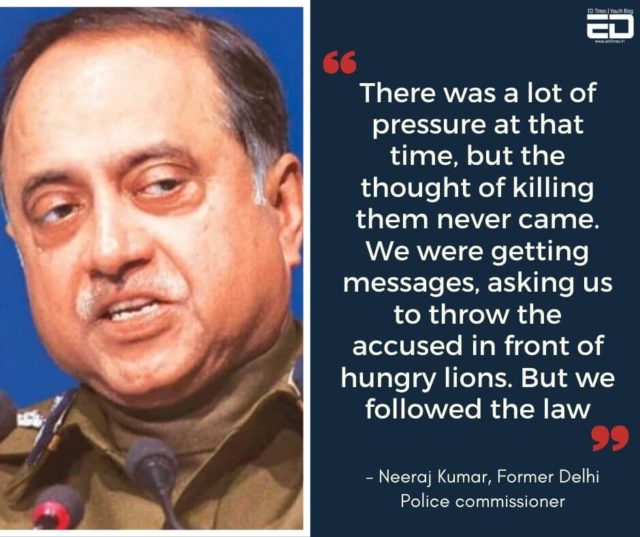 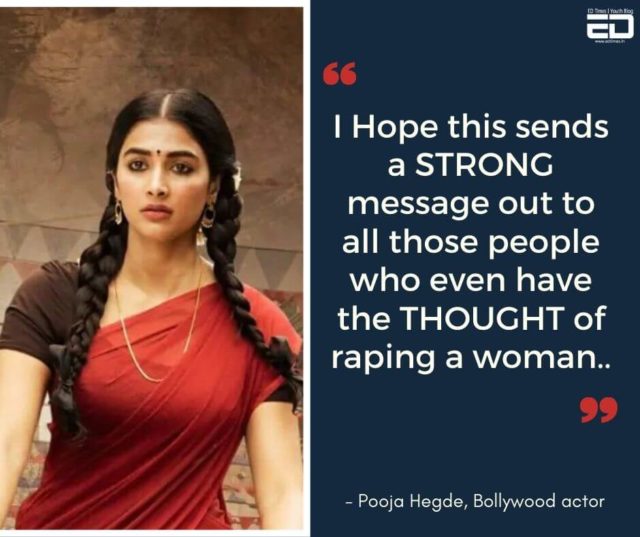 Bollywood actress Pooja Hegde also put out a tweet supporting the Telangana Police and commenting on how this set a strong example.

Read More: Should Fines Be Scaled According To Income? 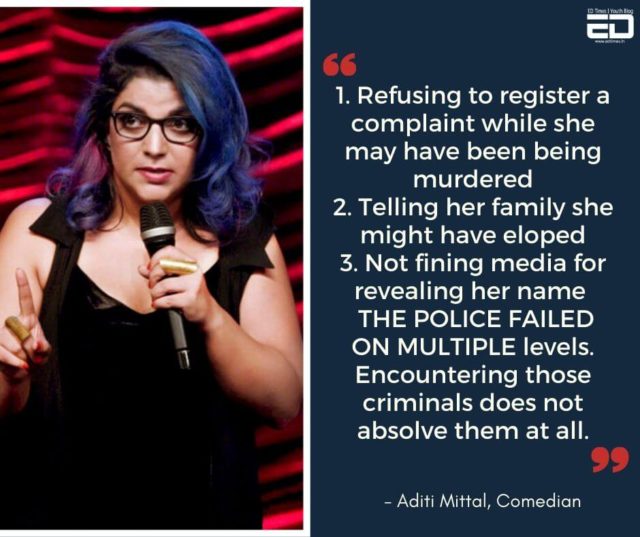 Comedian Aditi Mittal though seems to not be all in favour of the encounter or at least the massive celebration of the police. She tweeted the above, pointing out how the encounter was not enough to dismiss the other areas where the police had not done their duty thoroughly. 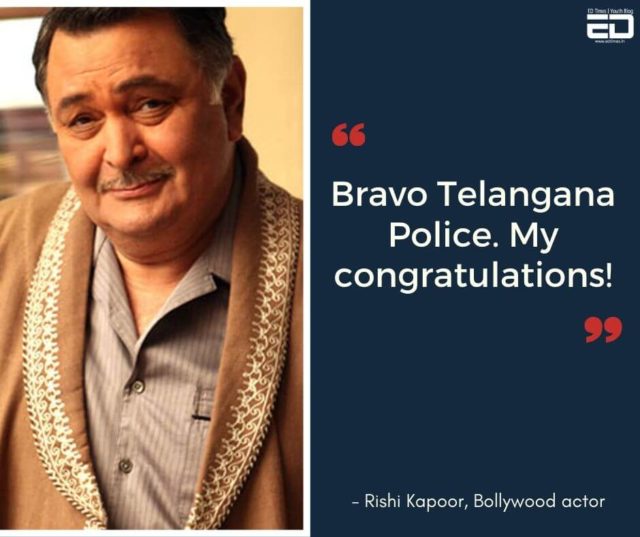 Rishi Kapoor though seems to have stood by the Telangana Police, posting this tweet congratulating them. 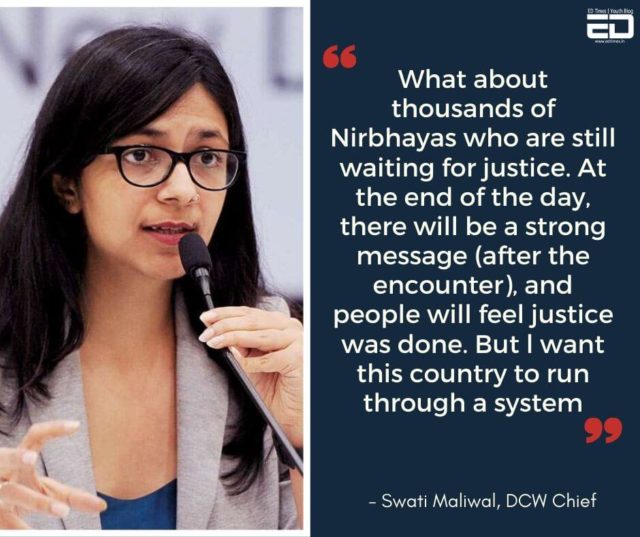 Delhi Commission For Women (DCW) Chief Swati Maliwal has stood by the encounter but also pointed out how there are still thousands of girls still waiting for their justice. 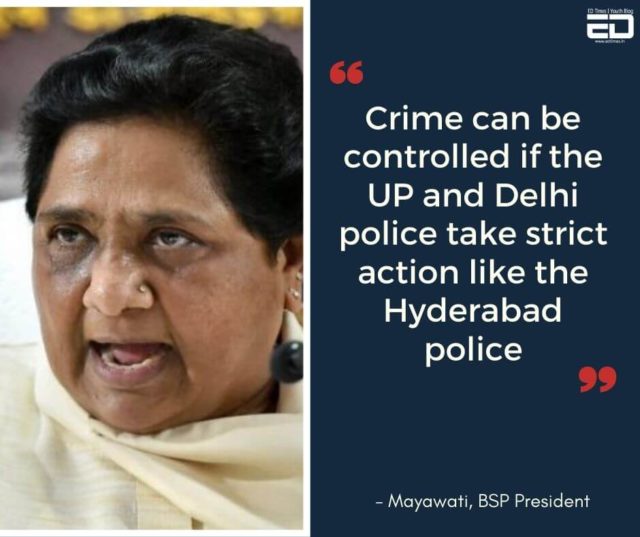 Mayawati, the president of Bahujan Samaj Party (BSP) has sided with the Telangana police and even asked the Uttar Pradesh and Delhi police to take inspiration from them to control crime.

Her full statement read, “Criminal elements enjoy state patronage and the morale of criminals is high. There has been a spurt in cases of heinous crime as well. On December 5, an attempt was made to kill a rape victim by setting her ablaze in broad daylight. Such incidents are a blot on humanity. Crime can be controlled if the UP and Delhi police take strict action like the Hyderabad police.”

She further added that “Police need to change its style of working. The central and state governments will have to work with a strong will, else criminals will continue to flourish and target common people and women.” 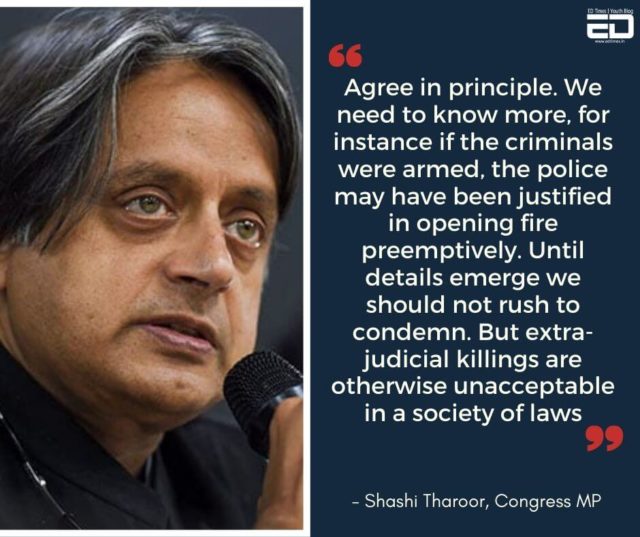 Shashi Tharoor, a Congress MP wrote the above statement as a quote tweet speaking how extra-judicial killings are not acceptable at all. Though he does admit that we need more information on why the encounter happened in the first place.

What do you think? Was the encounter really the right thing to do? Should the police have not fired at the accused? Should the authorities have gone through the proper route of a court trial?