Avengers: Endgame the final film in the Marvel Cinematic Universe (MCU) saga that spanned across more than a decade with 22 films a part of it, is finally out.

Fans and viewers are already losing their mind over it, with reviews being extremely favourable to the acting, action and more about the film.

The entire journey started in 2008 with Iron Man and culminates in 2019 with Endgame which also closes the chapter on one of Marvel’s most powerful villain Thanos.

In the last movie, Avengers: Infinity War, Thanos had snapped his finger, and turned 50% of the world into nothing but dust including many beloved characters.

However, in his latest target, Thanos has set his eyes on our very own Google.

What Has Thanos Done?!

Then search for ‘Thanos’.

One you have done so, you will see something like this. 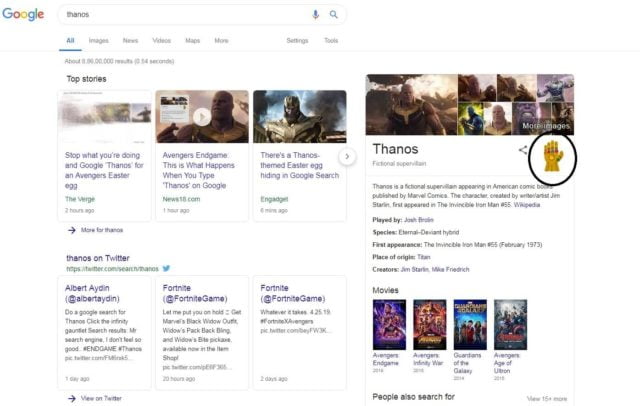 Click on the ‘glove’ that is there on the right side of the page, the encircled one.

Once you do that, just wait and watch what happens. Your page will turn into the last scene of Avengers: Infinity war, when everything is turning to dust.

Slowly, half of your page results will be wiped away, each of them disintegrating into nothing. 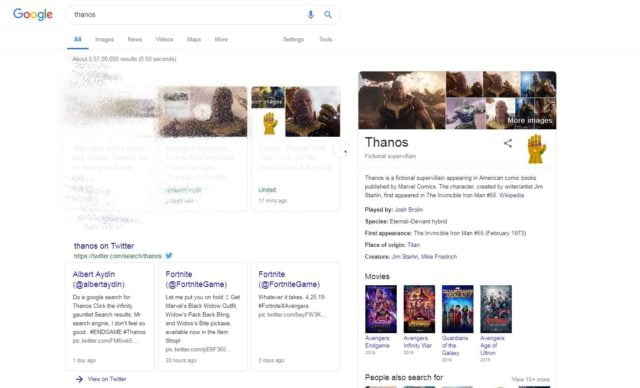 However, don’t worry, unlike the Avengers you don’t have to go on an inter-galatic mission in order to restore your Google page and bring back all the results.

Just click on the Infinity gauntlet once more, activating the Time stone, that will revert everything back to the way it was. 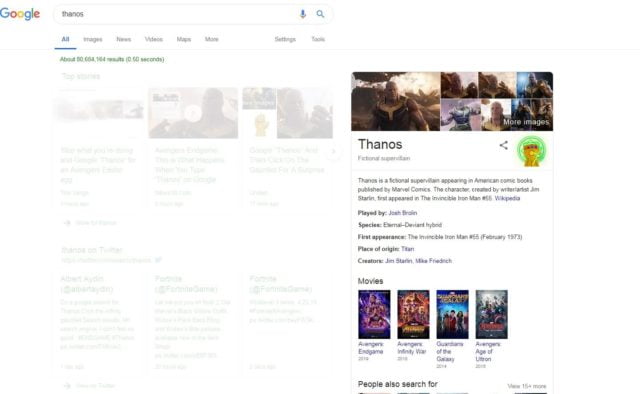 Read More: As An Indian Marvel Fan, I Came Across The Funniest Desi Memes & Jokes On The Avengers: Endgame Trailer

Twitter is buzzing with this and people cannot stop commenting on how interesting this Easter egg by Google is.

Do a google search for Thanos

Go to Google, search 'Thanos' and click on the Infinity Gauntlet…

Now imagine if we could use this on the majority of social media. Many blessings. pic.twitter.com/keCdRUIWiF

It is certainly an interactive and fun way to create more buzz around the movie and have fans experience it in a new way.

When you are doing it, it almost feels like a video game, where you have to do something in order get everything back in order.