The Coronavirus fear is getting real amongst people. Everybody is devising their own way to fight the virus and protect themselves against the same.

Indian health experts say that it would take more than one year to develop a vaccine against the COVID-19 disease. Thus, the best way to gain a control over such an infectious virus is by being extra cautious and taking preventive measures.

However, the Akhil Bharat Hindu Mahasabha unveils a rather unconventional way to fight the viral disease based on their faith and belief.

Keeping up with their words and utmost belief in the holy cow, the Mahasabha organized an open ‘gaumutra party’ to immune its people from the spread of Coronavirus.

A ‘Gaumutra Party’ To Cure Corona? 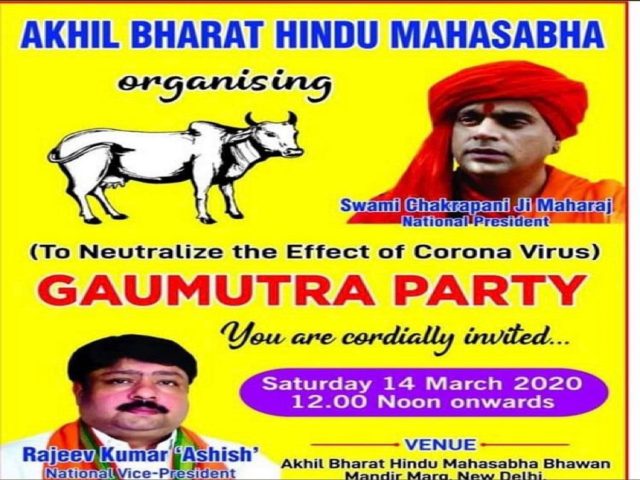 They claimed that drinking ‘gaumutra’ (cow urine) is influential in immunizing the body against the virus. Not only this, the belief that ran such a party was firmly based on the idea that the ‘gaumutra’ is capable of neutralizing the effects of the coronavirus on the human body.

Thus, according to Hindu Mahasabha- consumption of the ‘miracle liquid’ is the ultimate cure for COVID-19 and one should encourage drinking the same.

The Unconventional Party In A Brief

The ‘gaumutra party’ was held on Saturday 14th March, 2020 and at the Delhi office of Hindu Mahasabha located at Mandir Marg.

The idea of such a party is itself bizarre but the fact that it was attended by 200 people was more surprising.

The party commenced with proper rituals and prayers were made to the holy cow and the virus itself, asking it to leave peacefully and not kill any more people. Meanwhile a large poster in the background depicted an avatar of Hindu god Narsingh as coronavirus slayer.

While ‘gaumutra’ was the focus of the party, panchagavya, a traditional Hindu ritual mixture made of cow dung, urine, milk, curd and ghee was also served to the participants.

Read Also: Religion + Revenue Could Be A Lethal Combination With Focus On Cow-centric Startups To Boost Economy

The party took place in style with proper arrangements for all the participants to drink the ‘miracle liquid’ from earthen glasses or ‘kulhads’. These kulhads were served with raw cow urine with no addition of any herbal or medicinal extract in it. 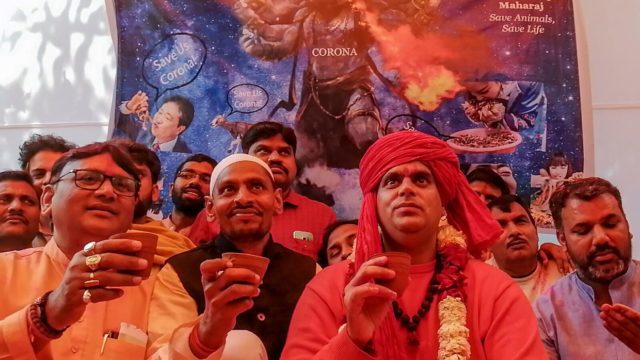 The Hindu Mahasabha chief, Swami Chakrpani Maharaj came forward to spread its message to the media on spreading awareness of the wonders of the cow urine.

“They (leaders) are ashamed of the gift gods have given us. Cow urine is pure elixir. Every person should drink it. They (global leaders) should get cow urine imported from India because the almighty resides only in the Indian cow and not in any foreign breed.”

“Coronavirus Is A Punishment For Consumption Of Non-Vegetarian Food”?

The party was mostly about faith and nothing scientifically reasonable thing was ongoing at the place.

Chakrapani put allegations that the coronavirus came to India after listening to ‘animals’ cry for help. He further argued that the virus was punishment for consumption of non-vegetarian food.

“Coronavirus has come because of the people who kill and eat animals. When you kill an animal, it creates a sort of energy that causes destruction in that place. This is the reason why it is spreading in the entire world,” claimed Chakrpani.

His claims were defied by the central government, who urged people to stop believing such ‘rumors’ as there is no scientific evidence that the virus was spread by chicken, mutton or seafood.

Surprisingly, while the medical practitioners are still to come up with a cure for COVID-19, the chief confidently says that they have found the cure. According to Chakrpani, “I request all the Presidents and Prime Ministers of the world to take cow urine on a daily basis. You have all these scientists who don’t know the cure, we have the cure given to us by the gods.”

Learning from the same, the former Directorate General of Health Services denied such a notion and clarified that there is no scientific proof that validates the claim of cow urine as a cure for coronavirus.

However, the Hindu Mahasabha still believe that cow urine will protect them from the pathogen and have an intention of organizing more ‘gaumutra’ parties in future.

While, I totally can never imagine drinking cow urine to protect myself from such a disease, I hope that the scientists discover the cure for COVID-19 as soon as possible so that such ‘gaumutra’ parties are not required.