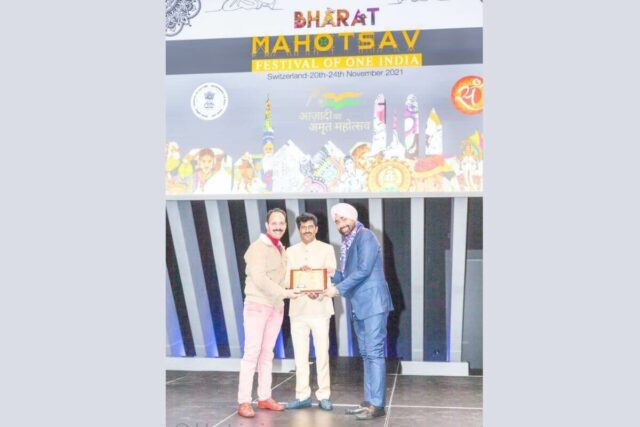 The award was given to Dr. BK Deepak Harkeby Dr. Mickey Mehta, Global Leading Holistic Health Guru / Corporate Life Coach. The program was affiliated to the Ministry of Culture and External Affairs of India. The award is also given to prominent personalities from various fields of India.

“Bharat Mahotsav” Festival of One India is being organised from 20th – 24th November 2021 in Zurich (Switzerland), with the theme being “Celebrating 75 years of Indian Independence”. In this unique MahotsavDr. BK Deepak Harke honoured with the most coveted Bharat Gaurav Samman to promote Indian ancient Rajyoga Meditation by doing 174 different world Records.

Dr. BK Deepak Harke became the first Indian to spread the Raja Yoga by setting 174 world records, including the following:

For spreading the word about Raja Yoga for the last 32 years, Dr. BK Deepak Harke has been honored with the “International Achievement Award” by actress Raveena Tandon in Calcutta.

He was also felicitated by actress Madhuri Dixit in Goa with “International Glory Award.”

Dr. Dipak Harke, was honored in Bangkok by Marissa Fankwamfi, a well-known Thai entrepreneur, and Dr. Abhiram Kulshreshtha, Director-General of the National Institute for Education and Research.

Lord B. Parekh, Lord Rami Ranger and Amrita Devendra Fadnavis presented them the Bharat Gaurav Award in the House of Commons of the British Parliament in London.

Mulayam Singh – The Gandhi of Finance and Business World, Who Strives to Help People with Kindness

Ton Chanseyma’s Are You Ok? becomes the most popular song in Combodia, garners 117 million views