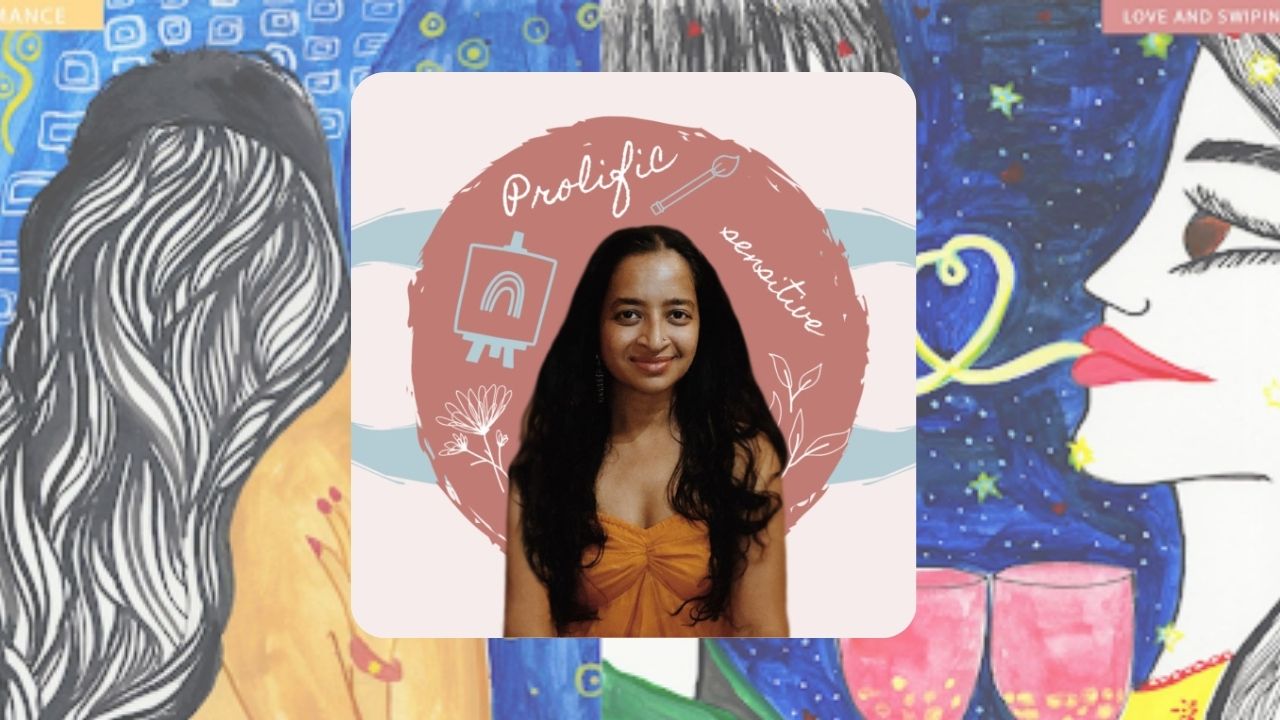 Indu Harikumar is an artist-cum-author living in Mumbai. Her recent crowd-sourced project #Identitty made headlines earlier this year. This idea was born out of a harmless conversation with an Instagram user.

The themes in her project revolve around women’s sexuality, body positivity, and sexual experiences. What Indu basically does is, turn photographs of women’s breasts into illustrations and share them on her Instagram page along with the stories behind them. 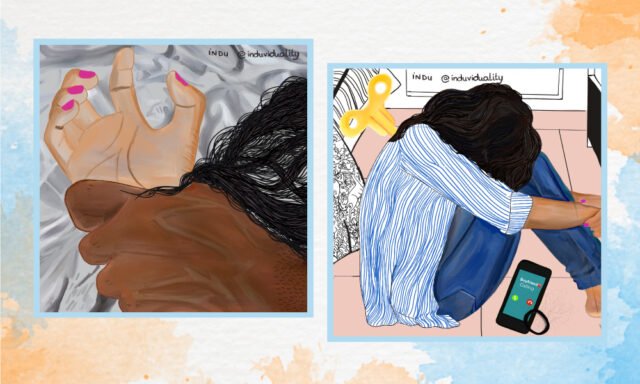 “The idea for the project stemmed from a conversation when a stranger sent a direct message on my Instagram about her big bust. The woman spoke about what it meant to be top-heavy, and how men were fixated with her breasts.

I, on the other hand, had grown up battling a lot of insensitive comments about being skinny. I was asked what I am going to give my husband because I am so flat-chested,” said Indu on talking about her first-ever full digital project.

All these varied experiences led to similar feelings, which made Indu wonder what if there are more people who had stories about their breasts and were willing to talk about it. This led to her project #Identitty, where she opened doors to conversations that were considered taboo in India.

She invites individuals to share a picture of their busts, along with their most intimate feelings and stories. This progress comes with its own set of guidelines.

“The story needs to be personal rather than generic. They can choose the way they want to send pictures of their breasts; in a bra, lace, fabric, mehendi, sheer, flowers, cup them, a Mandakini or even naked,” explained Indu.

None of her illustrations and sketches identify the subject or give out any clues as to who or from where they are from. 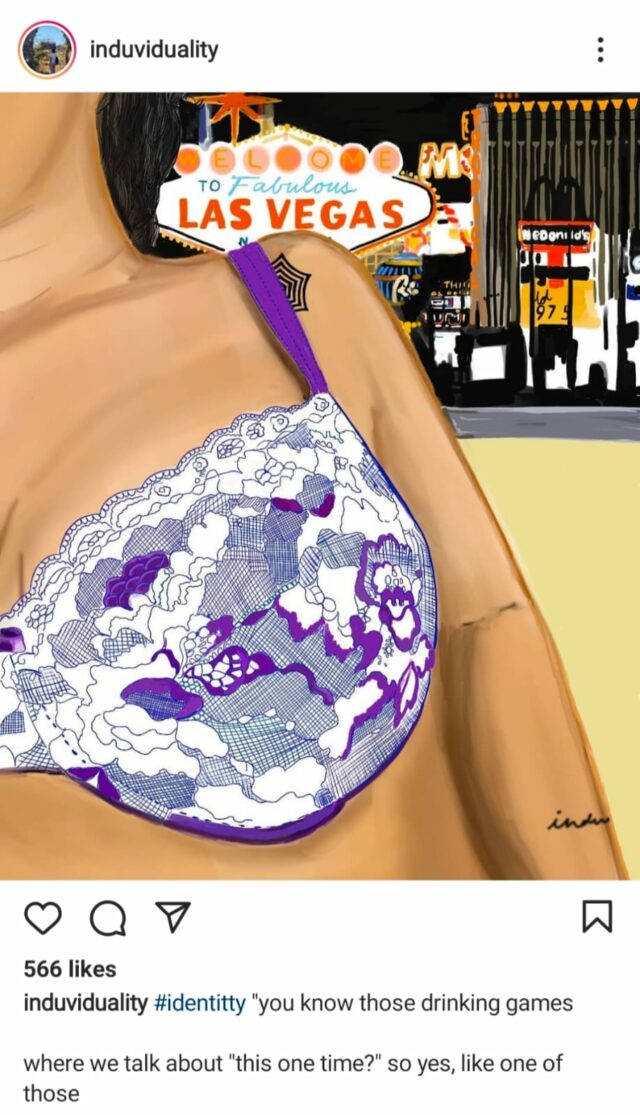 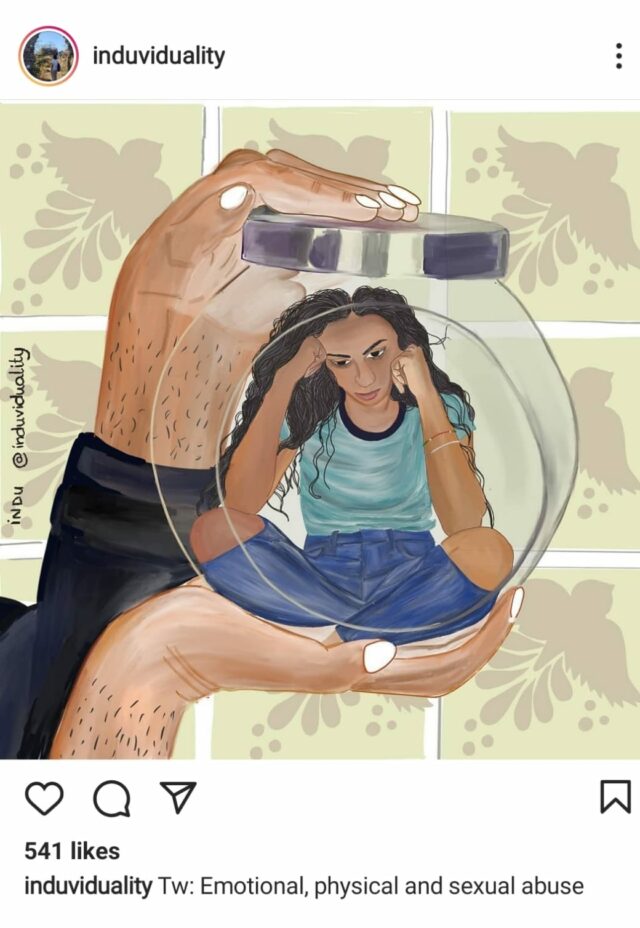 Her Instagram page (@induviduality) has turned out to be a safe space for women to share their experiences. She makes sure everyone feels safe and comfortable in sharing their pictures and she deletes everything once her artwork is done, allowing them complete privacy.

Among all the experiences that were documented under ‘Identitty’ what caught everyone’s attention was the story of a transwoman who recently underwent sex reassignment surgery. The illustration featured shades of blue and pink both representing gender binaries and transgender flag colors.

The caption along with it went as, “They say, “I woke up with tightness across my chest, a dull ache in my groin, and several new scars. Just like that, the envy of a three-year-old had taken 21 years of pain and vanished.”

Few of her other art-based projects

Indu had fascinated many back in 2016, with her first project #100IndianTinderTales (100 ITT) where she regularly posted questions around sexuality, mental health, and relationships on social media.

People often responded to her by writing about their personal experiences. She did have her doubts about this, “Why would anyone want to share intimate stories with me, a stranger, on the internet?”

Instead, 100ITT went viral, with everyone sharing their stories be it sweet rom-com or improper and vulgar. She was bombarded with requests to illustrate them. Her art found validation on all social media platforms and her storytellers received admiration for sharing their experiences. 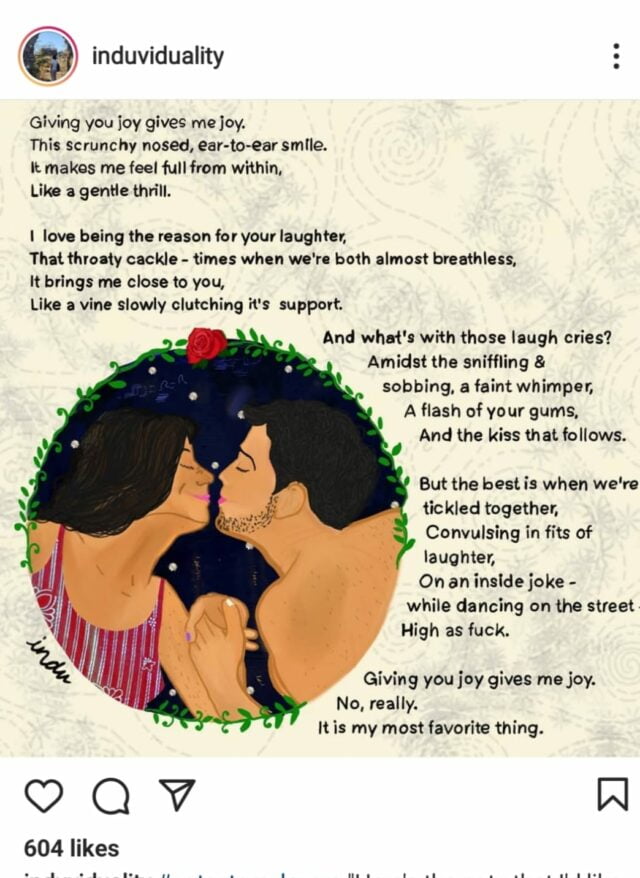 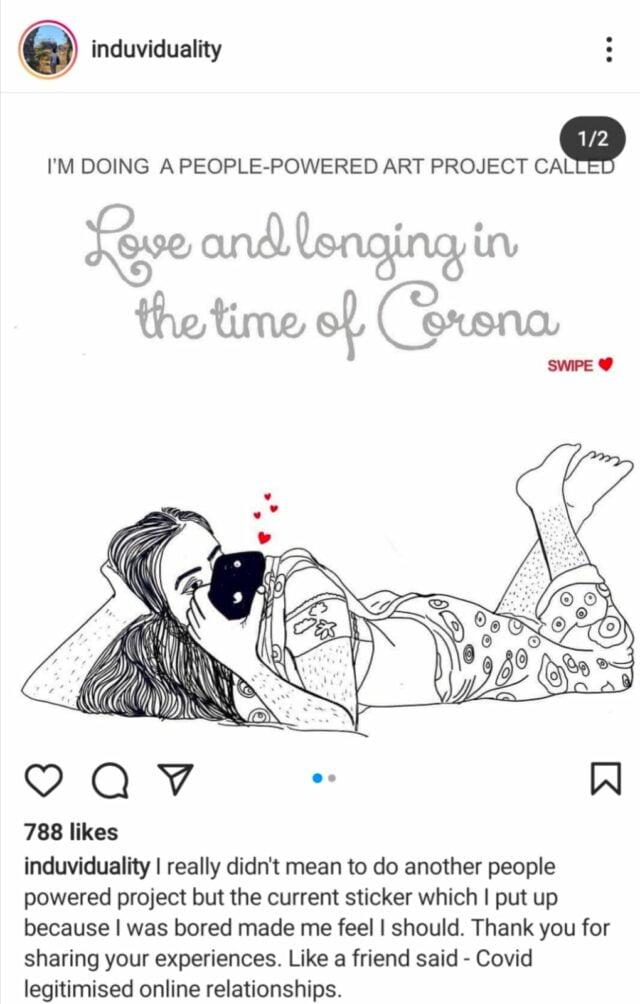 Currently, her illustrations of stories of Indians on Tinder, ‘100 Indian Tinder Tales’ are on display in Germany’s Kunsthalle Bremen art museum. 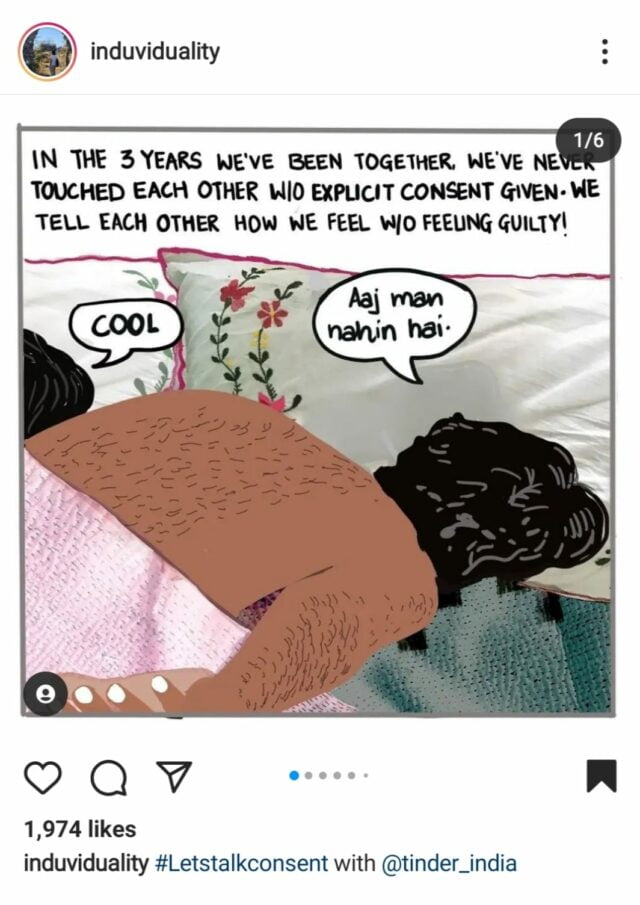 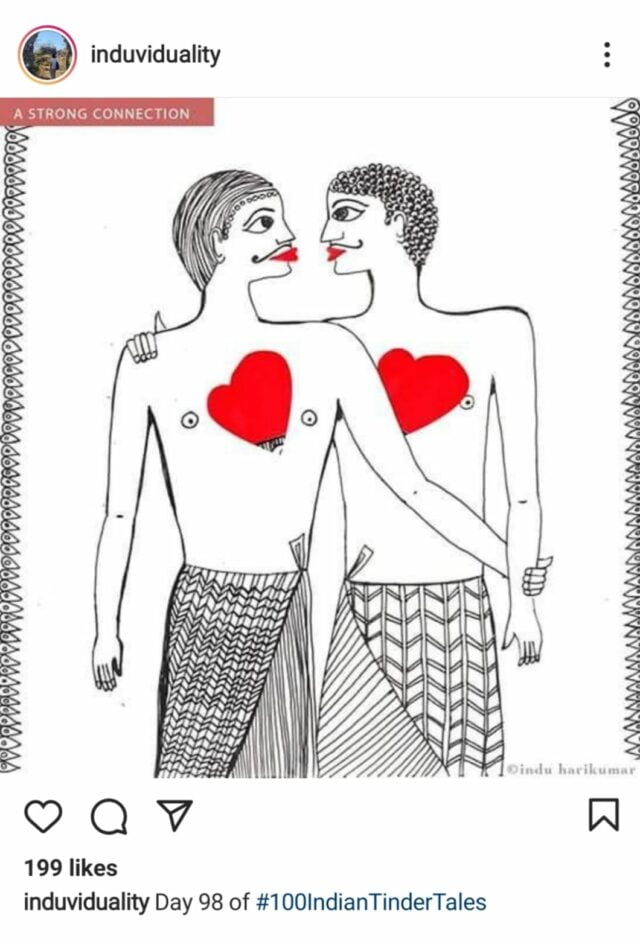 A year later, she started #BodyOfStories which shared stories of sexuality, gender, and body image issues. Then she came up with #Girlisthan, where she got women to talk about what they loved the most about themselves, putting the focus on the female gaze.

Art can change perceptions in the most expressive way. With Indian society being so conservative regarding women’s bodies and the way they dress, we need more artists like Indu. She feels that sharing stories around taboo topics can ease the stigma. 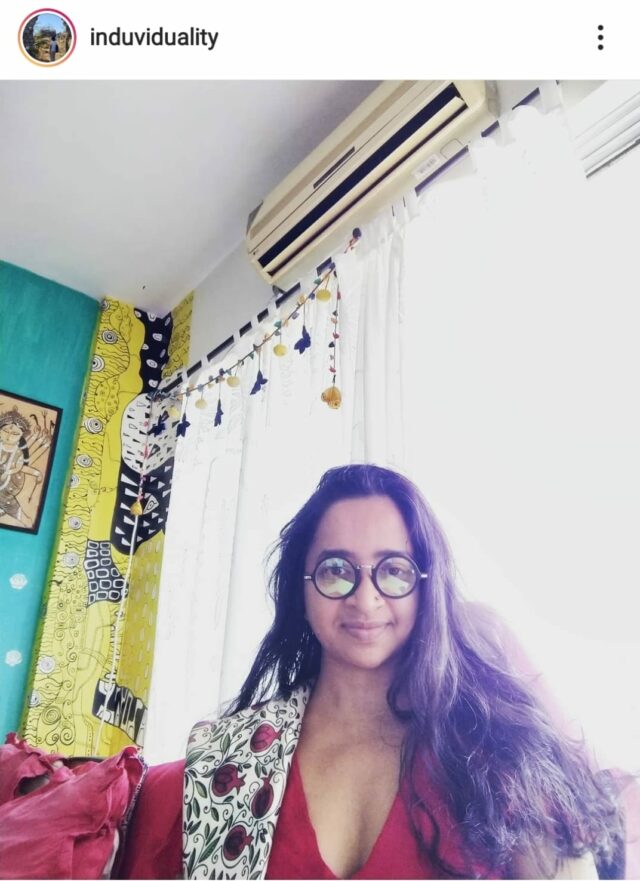 All her illustrated tales of sex, desire, and body parts have received positive reviews, giving her the confidence to flourish, as her paintings also channel the joy and pride that every woman should take in their bodies.

In Pics: Meet The Artist Who Creates Stunning Artworks By Injecting Paint Into Bubble Wrap Using Up To 4,000 Syringes At A Time