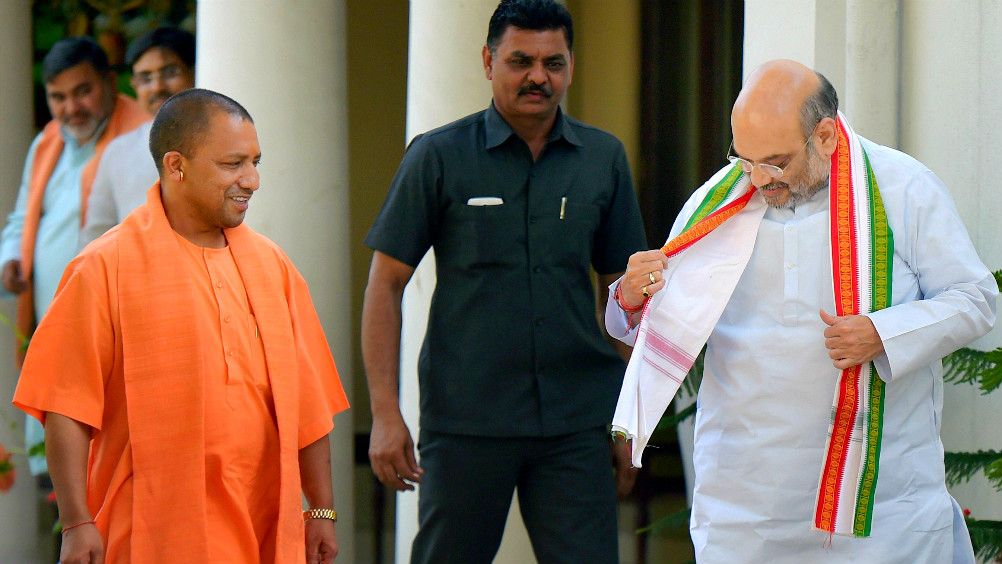 Before I get verbose with my feelings about the present political scene in India, let us accept one lucid fact: Yogi Adityanath is the best Chief Minister ever and Narendra Modi the best PM, like bestest evaaa. Am I nationalist enough now?

Since swearing-in of Yogi Adityanath, part-time Mahant of Gorakhnath temple and full-time saffron wearing cow lover, as Chief Minister of the most populous state of India, Uttar Pradesh, he has been garnering more headlines in an hour than the number of head turns a girl not covering her head would score in Islamabad.

In the past month, news has escalated from bizarre to wild. We now know why Yogi’s hair doesn’t grow or how much his pet cows love daddy.

But what we are unsure of is whether this is a strategy to replace Modi as a possible candidate for 2024 elections with Yogi. It might be because PR work in a subtle way.

Remember the time when out of nowhere Advani was replaced with Modi? It was not an overnight shift in policy. It was planned. It is always planned. Over the years Gujarat model gained prominence in the media and hence in the public at large. The face of which was, obviously, the then Chief Minister of Gujarat Narendra Modi. This happened over the years 2011 to 2012. And in 2013, he was made the official Prime Ministerial candidate.

Also read: Top 5 Speculations On The Future Of Yogi Adityanath

Remember the time when out of nowhere Advani was replaced with Modi? It was not an overnight shift in policy. It was planned. It is always planned.

Let us look at the work done (or at least ordered) by the Yogi Adityanath government in the short period it occupied office: Formation of Anti-Romeo squad, relief to farmers having small loans, making roads pothole free, cracking down on illegal and improper slaughterhouses, chiding lethargic officers, making government officials work more patiently and punctually, ordering probe in Gomti Riverfront project, holding public hearings at his residence, making regulations for his own ministers to not make irresponsible statements and asking his ministers for their asset declaration.

I’m not sure whether I have covered everything concisely or not. Nevertheless, he is making headlines for all the good reasons, and nowhere it is being shown that he has on occasions, before the elections, expressed strong and vehement dislike towards a particular community.

This is not a report card of one or two months of Yogi government. It is rather more of a summary of positive initiatives taken by the government to disentangle the torts of the state.

It’s not striking that a minister has tried to do so much in his initial days. It’s common. Every new office bearer does so. What’s new here is the enthusiasm by which the media covered all of these issues, relevant or irrelevant.

And media here is synonymous with BJP.

The time and footage given to Narendra Modi has been slowly reducing since the new year and now it has been replaced by Yogi’s policies, facts, vegetarianism, pet lover nature, and asceticism.

This should concern PM Modi.

“what goes around comes around”

As they say, “what goes around comes around”.

This article is based on the notion that Modi won’t stand for elections as PM 6 years from now. That may be his personal decision, or the party’s. Modi could be grooming Yogi himself for the job down the line. Either way, it’s a lot of ifs.