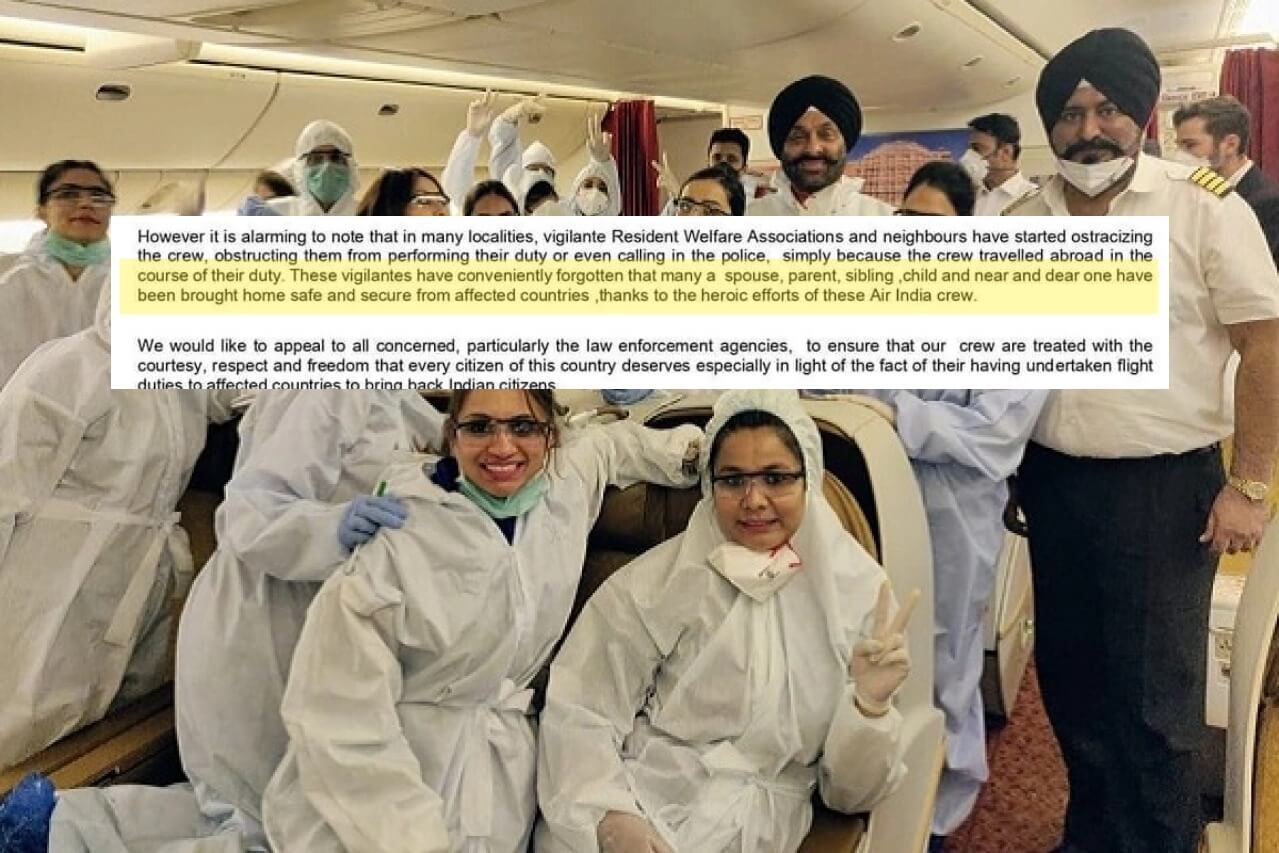 The times now are frought with tension and fear. Coronavirus is quickly spreading across India, most public places have been shut down, people are told to stay at home and only go out if absolutely needed.

However, in the midst of all this, India’s national carrier, Air India, has been constantly carrying out evacuation flights, getting back stranded Indians from places that have been most heavily affected by COVID-19 like China, Iran, Italy and such places.

While putting their own lives in danger, the crew and staff have been bringing back Indians safely to their families and home land. But it seems that the sentiment is not returned in the way it was hoped.

In fact, as per a recent press release brought out by Air India, some people in Delhi and Mumbai have been harassing and ostracising Air India crew.

What Is This Press Release? 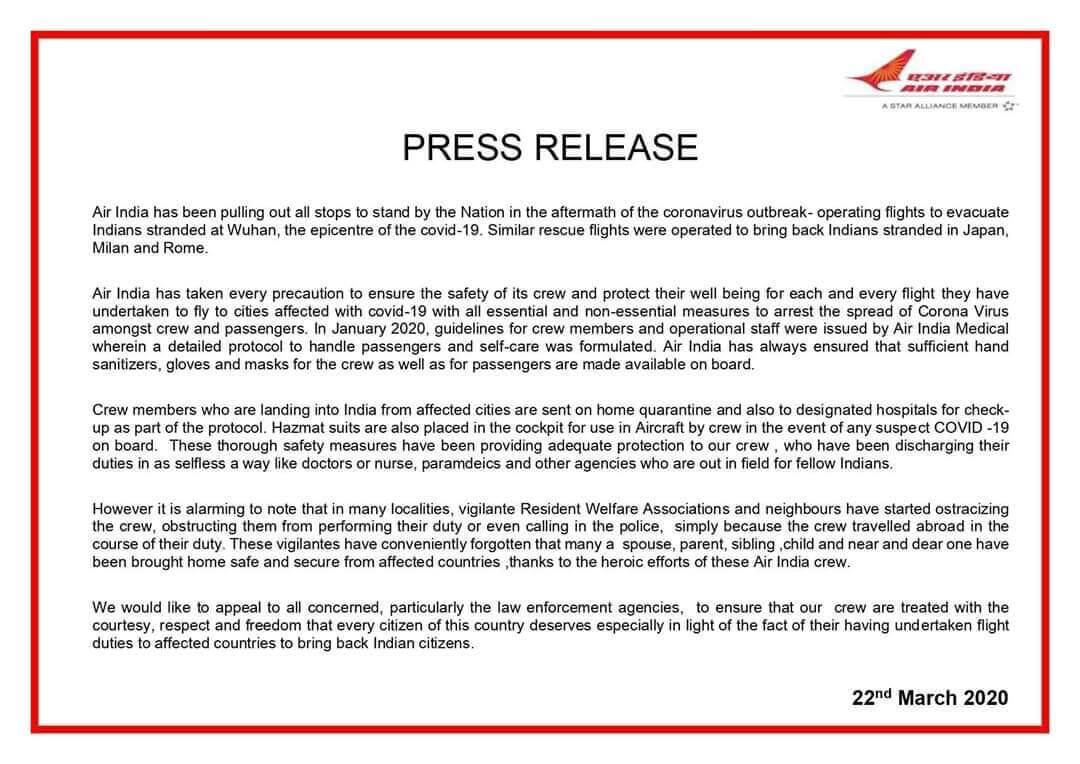 “Air India has been pulling out all stops to stand by the Nation in the aftermath of the coronavirus outbreak- operating flights to evacuate Indians stranded at Wuhan, the epicentre of the covid-19. Similar rescue flights Were operated to bring back Indians stranded in Japan. Milan and Rome.

Air India has taken every precaution to ensure the safety of its crew and protect their well being for each and every flight they have undertaken to fly to cities affected with covid-19 with all essential and non-essential measures to arrest the spread of Corona Virus amongst crew and passengers. In January 2020, guidelines for crew members and operational staff were issued by Air India Medical wherein a detailed protocol to handle passengers and self-care was formulated. Air India has always ensured that sufficient hand sanitizers, gloves and masks for the crew as well as for passengers are made available on board.

Crew members who are landing into India from affected cities are sent on home quarantine and also to designated hospitals for check- up as part of the protocol. Hazmat suits are also placed in the cockpit for use in Aircraft by crew in the event of any suspect COVID -19 on board.

These thorough safety measures have been providing adequate protection to our crew, who have been discharging their duties in as selfless a way like doctors or nurse, paramedics and other agencies who are out in field for fellow Indians.

However it is alarming to note that in many localities, vigilante Resident Welfare Associations and neighbours have started ostracizing the crew, obstructing them from performing their duty or even calling in the police, simply because the crew travelled abroad in the course of their duty. These vigilantes have conveniently forgotten that many a spouse, parent, sibling, child and near and dear one have been brought home safe and secure from affected countries, thanks to the heroic efforts of these Air India Crew.

We would like to appeal to all concerned, particularly the law enforcement agencies, to ensure that our crew are treated with the courtesy, respect and freedom that every citizen of this country deserves especially in light of the fact of their having undertaken flight duties to affected countries to bring back Indian citizens.”

This is extremely saddening to see how crew and staff of an airline that is doing something good for the country is being treated with so much disrespect and derision.

I’m all for calling out any airline or organisation if they are doing something wrong, or their services are not up to par as expected. But this is just not done.

Apparently, a close source even told me, how a society called the police on an Air India employee, and they had to deal with various questioning and stress because of it.

Read More: How To Set Up A Free Video Conference For Your Work From Home Days

Air India has in the ongoing coronavirus scare evacuated over thousands of Indian citizens, only to get this type of treatment.

As per India Today, a Mumbai-based crew member also revealed that, “Is working for a national carrier and getting back our people safely back home a crime. My society called up my husband to inform me that we should move out and manage something elsewhere as a precautionary measure. I am very proud and fortunate that I am one of the many who are helping people in this pandemic. Also, we as airline crew are special as we are helping people all over the world. I can understand the panic around. But we definitely don’t deserve this kind of mental harassment”.

Another crew member told TOI anomously that, “We do not get our salary on time. We do not know when we will get it either. We do not think about ourselves whenever being called to fly to war zones and now corona hotspots to evacuate Indians. Our salary, which for months has not come on time, is being deducted and on top of this we are facing this ostracisation from our neighbours and RWAs. We are humans, don’t break us.”

This is whats at stake. The Commander of the Air India 777 flying to Rome to rescue 265 Indians is Captain Swati Raval. She is the mother of a t year old child. This is called bravery. Its people like this who are being targeted by ignorants in RWAs. Not done. pic.twitter.com/ge5KOfWI4x

The ‘Quarantined’ stamp given by health authorities at the houses of some of the crew members has further complicated it all, making them an easier target for other residents.

#FlyAI : We would like to appeal to all,particularly the law enforcement agencies,to ensure that AirIndia crew are treated with respect and freedom that every citizen deserves, especially those who have been discharging their duties in selfless manner for return of fellow Indians pic.twitter.com/Uthlk57jG3

It is saddening to see that the airline has to literally beg and plead for basic courtesy and respect from the very people that they have probably helped in some way or another.