Home Lifestyle 93 YO Diabetes Patient Returns Home After Recovering Well From Coronavirus And... 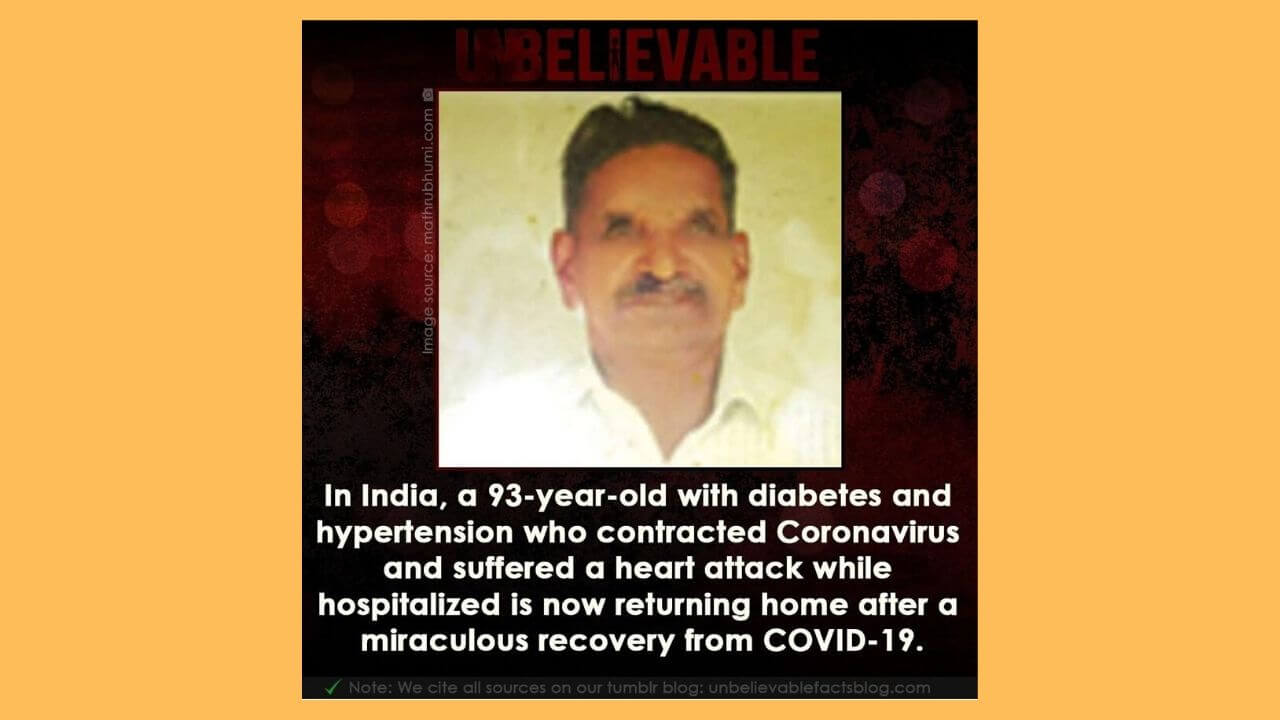 Right now, the entire world is dealing with coronavirus, a highly contagious viral infection that has infected more than 8,70,000 people worldwide.

But while people get scared instantly by this high number, they often don’t pay attention to the recovery rate. As per sources, more than 1.5 lakh people have already recovered from this disease.

This is highly encouraging to see, since it means that there is some cure for this disease which will soon be found and distributed to the general public.

One way this illness has been hyped is that it is ‘deadly’ for the elderly and the children, however, it seems that might not be entirely true. This is because just recently an elderly couple over the age of 80 have reportedly recovered from having coronavirus and will soon be going back to their home.

A couple, Thomas, age 93 and Mariyamma, age 88, from the Ranni a locality in the Pathanamthitta municipality from the state of Kerala were said to have contacted the coronavirus.

They apparently got it from their son who had come back from Italy with his wife and son and later tested positive for COVID-19 early in March. The parents caught the virus from them and were shortly admitted to the Kottayam Medical College and Hospital.

The couple were said to be in the danger zone for this disease, as not only were they elderly but also had other ailments. The couple have diabetes and hypertension, with the husband also suffering from heart problems.

Thomas, in fact, had a difficult time with his recovery as his condition deteriorated to the point of him having to be put on a ventilator.

Read More: How Far Is The World From Finding A Cure For COVID-19 Virus?

He also experienced chest pains along with difficulty in getting adequate oxygen due to accumulation of phlegm and intense cough. The doctors were right in looking out for possible cardiac complications as Thomas did suffer from a heart-attack while infected.

Mariyamma, Thomas’ wife also suffered from urinary infection, same as her husband, along with bacterial infection, leading to a tough road to recovery.

Although both were kept in separate rooms, it turned out to cause them discomfort and restlessness, leading to the medical staff putting them in the transplant ICU where they would be able to see each other at least.

However, slowly but surely Thomas first started to recover some time around last week when he was taken off the ventilator and his cough started to go away too.

His wife also showed signs of recovery, and the final good news came when they PCR tests came back negative. The doctors are still observing them for the time being, ensuring that their condition remains stable, before the medical board assigns a discharge date to them.

But it is said that they will soon be allowed to go home.

After their recovery, KK Shailaja, the state’s health minister has sent out a congratulations to the entire staff of Kottayam Medical College for making this possible and aiding the couple’s recovery to success.

The couple had seven doctors and around 25 nurses tending to them and helping them recover enough to go back home.

Many experts though, have called it “one of the rarest of the rare case”, possibly due to the extreme health ailments the couple already had prior to getting the infection and seeing their advanced age.

Some though, have commended the patient care system in South India, taking it as an example that they must be doing something right.