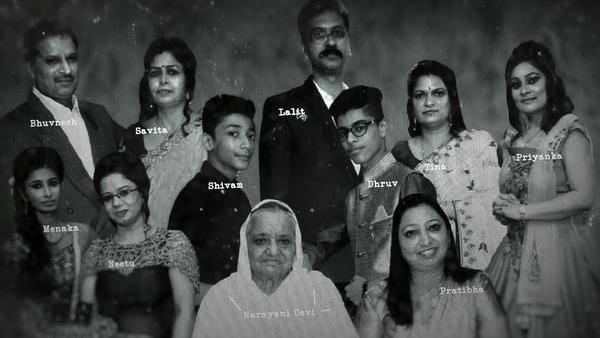 The date 1st July 2018 shall forever be etched in the hearts of every Indian in lieu of the horrors and atrocities that were discovered that day. Ten members of the Chundawat family also known as the Bhatia family were found hanging from the ceiling whereas one other member was found dead in the next room.

Released on 8th October, Netflix’s Documentary series – House of Secrets: The Burari Deaths sent a chill down the spine of the entire nation.

Background Of The Bhatia Family

The Chundawat family, also dearly known as the Bhatia family by their neighbors, originally lived in their native town of Tohana, Haryana. However, soon they relocated to a double-story house in Burari’s Sant Nagar neighbourhood in Delhi and lived there for 20 years. The family ran a grocery shop and plywood business in the area.

The Bhatia family was just like any other joint family. However, according to the neighbors, they were very wholesome. They never fought with each other, always treated their guests with the utmost respect and treated their employees as families.

The Bhatia clan consisted of two brothers and one sister – Lalit, Bhuvnesh and Pratibha, their mother, their spouse and their children.

Narayani Devi was 80-year-old and was the mother of Bhuvnesh, Lalit and Pratibha. Bhuvnesh was married to Savita and was a father of two daughters in their 20s and a son who was just 15 – Nitu, Menaka and Dhruv.

Lalit was married to Tina and their only child was Shivam who was only 15 years old. Pratibha was the widowed daughter of Narayani Devi and was the mother of an only child – Priyanka.

In 2006, Lalit Chundawat’s father Bhopal Singh died of natural causes. After the death of their father, Lalit became very introverted. One day, he told his family that he was possessed by his father’s soul, who advised him the ways to attain a good life. Since 2007 he had been maintaining a diary on his father’s instructions.

On the morning of 1 July 2018 around 7:15 am, the neighbour Gurcharan Singh discovered the bodies when he went to call one of the deceased for an early morning walk.

Ten of the eleven people – two men, six women and two teens – were found hanging in the courtyard of the house. They were blindfolded and their mouths were taped. Some of the bodies had their hands and feet tied as well. Another woman, 80-year-old Narayani Devi was found dead in another room. It appeared that she had been strangled.

But the front door was open, so was it really suicide? Up until today there have been various speculations until Netflix’s Documentary Series revealed certain things.

Read More: Why Is Squid Game On Its Way To Becoming The Most Popular Show Of Netflix Than Any Other In India?

Members of the family were found hanging from a mesh in their ceiling in the hallway, all close to one another. Their faces were wrapped almost entirely, ears plugged with cotton, mouths taped and hands tied behind the back. There were five stools, probably shared by the 10 members. Their faces were covered with cloth pieces cut from a single bed-sheet.

Tommy, the pet dog of the family, was the only survivor in the house. He was chained on the terrace and suffering from high fever when the police found him after discovering the 11 bodies. It was not clear who had tied him.

Cause Of Death – Apparently shared Psychosis

Police found 11 diaries in the house, all of them maintained for a period of 11 years. It contained handwritten notes detailing how hands and legs are to be tied. Details/directions provided in the diaries match how the bodies were found with their faces covered, mouths taped, and cotton balls in ears.

The diary also mentioned: everyone will tie their own hands and when the kriya (ritual) is done then everyone will help each other untie their hands indicating that the family was not expecting to die.

Aura Of Opportunism Around The Cops

When the policemen were questioned, one of them freely admitted that he was asked about the Burari deaths even today. In one of the episodes, while debating with his right-hand man about whether or not the deaths can be classified as suicide or murder, his partner excitedly describes it as an ‘incidental death’, before quickly correcting himself: “Accidental death, I mean.”

There’s an aura of opportunism about these two cops, and it wouldn’t at all be surprising if they continue telling stories about the Burari deaths well into retirement. They weren’t exactly involved in the investigation, but just happened to be posted at the right ‘thaana’ at the right time.

In a keenly-observed moment that the filmmakers cleverly choose to retain in the show, the cop cuts a call by telling the person on the other end that he is busy shooting a documentary. It reveals so much about him.

Revelation Of The Diaries

According to the diaries which were proved to have been written by the occupants after a handwriting analysis test, Lalit claimed that he was possessed by the spirit of his late father, and coerced his family into not just believing him, but also keeping their domestic matters a secret.

He influenced his family with minor ‘miracles’ and made them believe that such a ritual will only lead them closer to salvation and prosperity.

The show revealed how even in one of his trances, Lalit ensured that his wife remains subjugated in both a literal and metaphorical sense. Not only does the documentary series highlight the reason why mental health awareness is so important but also subtly hints at the role of patriarchy in the Burari deaths.

Lalit’s mental and emotional hold over the family had grown like cancer since his father’s death. And near. Two statements made by Lalit were a lot like revelations right before the deaths –

“It’s time for daddy’s visit” and

“Nobody will disobey what’s written here.”

Was Narayani Devi Murdered Or Did She Die Willingly?

Earlier, police thought that the eldest lady of the family, 77-year-old Narayani Devi was strangled by one of the family members but later it was found that she also died due to hanging without any struggle. Police suspect that someone from the family took off her noose and arranged her body after death.

In fact, according to one of the entries in the diary, there was a certain mantra that called for being chanted at the time of death –

“In your last hours, while your last wish is fulfilled, the sky will open up and the earth will shake, don’t panic but start chanting the mantra louder. I will come to save you and others.”

Apparently, the spirit of Lalit’s late father was supposed to save them.

The documentary series doesn’t indulge itself in the investigation of the crime but tries to dig deep into the circumstances surrounding it. To this date, the case has been written off as a ‘shared psychosis’ gone wrong and the case is closed.

Sources: The Hindustan Times, The Indian Express, Times of India