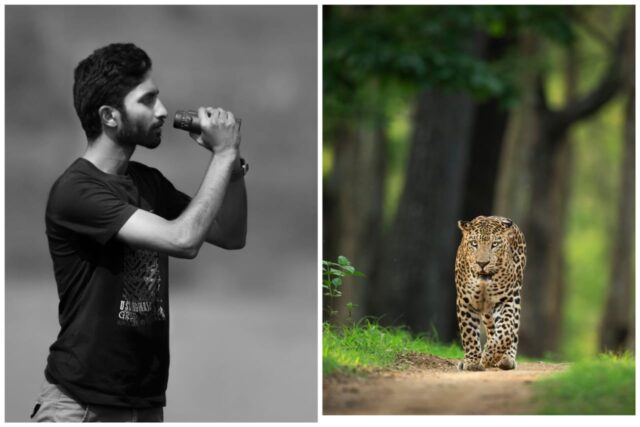 Zeal and passion are things that make a man powerful and push him or her towards the accomplishment of what they want. Here today we have Yashas Narayan, a highly acclaimed and accomplished Wildlife photographer who accentuates life via naturistic dynamism.

A civil engineer by profession with a construction business in Mysore, he has extended his life beyond the frameworks of monotony.  As a Wildlife photographer and a Naturalist, his specialty extends to tracking and studying the big cats of the Indian Jungles.  His popularity rests on being one of the best trackers in the nation when it comes to tracking big games.

Born and brought up in Mysore his life has been humbly connected to nature.  Mysore, the Garden city and heart of many Sanctuaries and National parks deeply impacted his life, and Yashas has been visiting the forests since his childhood.  The nostalgia borne out of his young memories is vividly reflected through his art which makes it all the more unique and magnificent.  His passionate love for nature can be summed in his own words, “The jungle is filled with beautiful connections, explicitly linking flora with fauna. We simply need to spend time in the wild to understand these connections”. Such was the zeal and visionary insight which kept him going back to the jungles and explore the meadows.

Spending his childhood watching and learning about these symbolic connections, Yashas picked up the camera a decade ago, intending to bring these iconic stories from the wild to the world. He has been documenting tigers, leopards and capturing glimpses of black panthers in South India. His astonishing portfolio of these magnificent predators has earned him several publications on various media platforms.

It is often seen that when you do something out of what is trodden or thought to be a general process, it surely invites hurdles. Yashas also had no escape, but eventually what he started as a hobby in his college days has turned out to be a yielding profession now. Road taken has made all the difference! Yashas, as a successful mentor now guides several private groups into the forests of South India. He hopes to inspire more people to visit the jungle and discover the right tranquillity of life by understanding and building connections with the existential nature of the wild. He contemplates on ways of the jungle and asks others to experience the wildlife in its raw form with an endeavour to conserve it.

His mentorship extends for budding wildlife photographers and helps them to imbibe skills linked to the high standards of world-class capturing. High in achievements, but down to earth, he is one of the few photographers who believe, “ shooting with mere intention to win competitions, invite monotony and we stop enjoying it and ultimately losses interest in it”.

His success mantra, hence, lies in his take that he is shooting not to compete with anyone, but to satiate himself and as his passion.

Junaid Malik is winning millions of hearts with his superb content

Social Opinions Chitra Rawat - July 26, 2021
Disclaimer: Originally published in June 2017. It is being republished since it still remains an interesting topic till today.  A language, no matter how new...