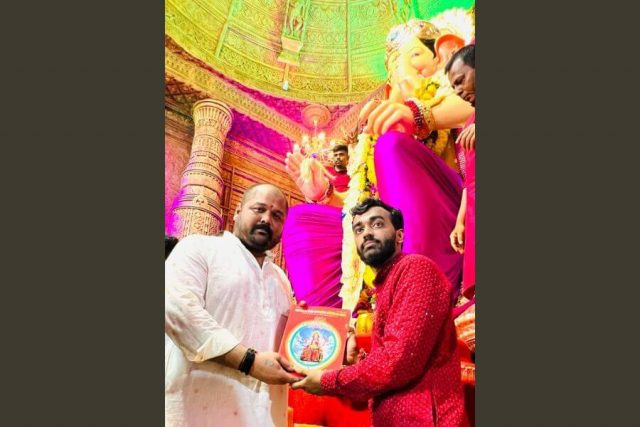 September 2: On the occasion of Ganesh Chaturthi, world champion Indian power lifter Mahant Gaurav Sharma came to visit the famous Lalbagh ka Raja of Mumbai. He appeared in the Lal Bagh ka Raja to bow his head. Power lifter Mahant Gaurav Sharma wished Bappa that all the players of the country give their best in all kinds of sports like cricket, football, hockey etc., and raise the flag of India all over the world. Players should get gold medals for their country India in every type of sport, and he prayed this.

Let us tell you that although Ganesh Utsav is celebrated with great pomp all over India, in Maharashtra, its splendor is seen in a special way. Many big pandals are decorated in Mumbai, where lakhs of devotees visit every day. Lalbagh ka Raja is considered to be the most popular public Ganesh Mandal, in Mumbai. From common man to celebrities also come here to see Bappa. Mahant Gaurav Sharma also came here to bow his head.

It is believed that whatever wish is sought from the Lal Bagh ka Raja, it is definitely fulfilled. This is the reason that during the Ganesh festival, devotees have been standing in long lines for hours here for darshan.

Power lifter Mahant Gaurav Sharma said that it is a wonderful experience to Darshan the Lal Bagh ka Raja and seek his blessings. Bappa is indeed the remover of sufferings. Bappa’s blessings bring peace, success and growth in life.

It is noteworthy that Mahant Gaurav Sharma won two gold medals at the 2016 World Powerlifting Championships in England. Gaurav Sharma, who started his innings as a lifter, later went into the field of powerlifting under the guidance of Dronacharya award-winning coach Bhupendra Dhawan.