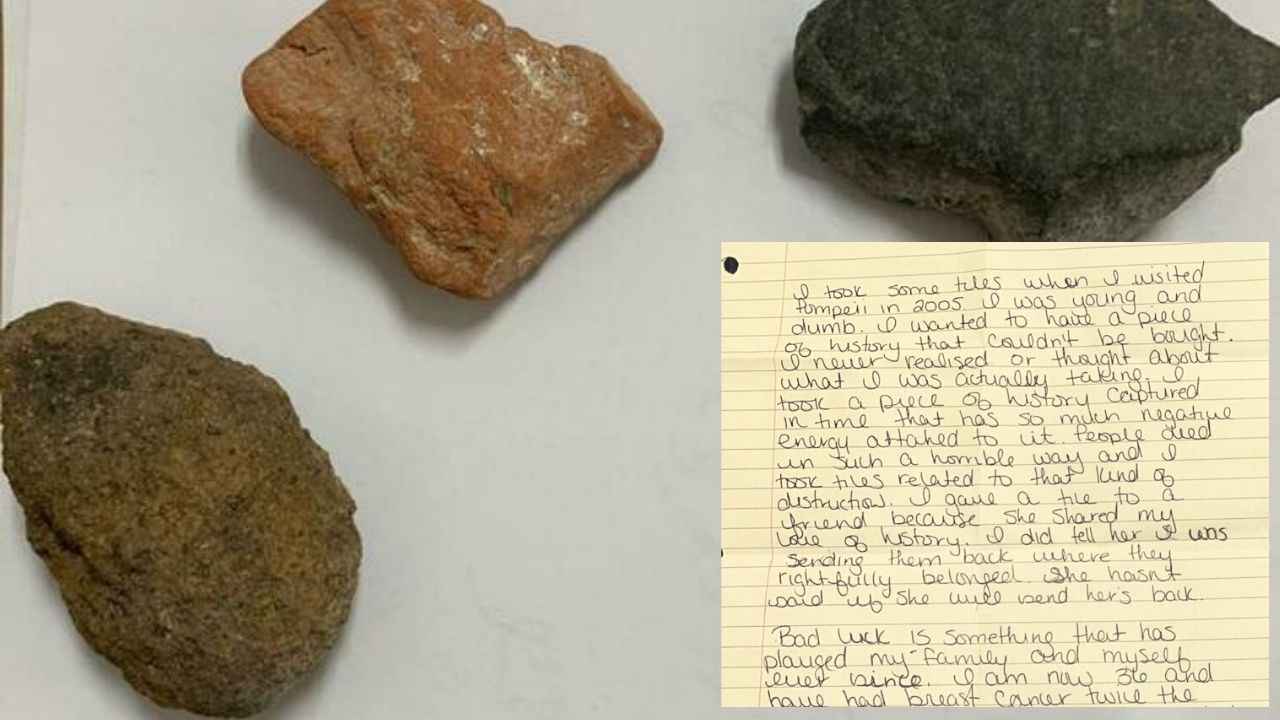 15 years ago, a Canadian tourist took more than just memories from her trip to Pompeii, a UNESCO World Heritage site. She carried along with her the artefacts that would turn out to have ‘cursed’ her life, bringing her misfortune for the years to come.

Expressing her guilt and the troubles that have haunted her all these years in a letter, she mailed the stolen artefacts back to Pompeii.

The woman, identified only as Nicole in the letter, sent a package with 2 mosaic tiles, parts of an amphora (ancient jar) and a piece of ceramics that she stole from the UNESCO World Heritage site to Pompeii’s archaeological park.

In the letter, she described how she swiped the artefacts from Pompeii back in 2005 and ever since then had suffered from health and financial issues, which she attributed to the ‘cursed’ artefacts.

Along with the package, she sent a letter in which she wrote, “I wanted to have a piece of history that couldn’t be bought. I took a piece of history captured in a time with so much negative energy attached to it. People died in such a horrible way and I took tiles related to that kind of destruction.”

Also Read: Crazy Facts About 7 Stolen Jewels From India By The British

Nicole was in her 20s when she stole the artefacts from the ancient city, which is now one of the most popular tourist destinations in Italy, with over 2.5 million annual visitors.

After returning to Canada from her trip, she suffered from breast cancer twice. Now 36-years-old, she had to undergo a double mastectomy. Her family also suffered from financial problems.

In the letter, after specifying her health and financial problems, she asked for forgiveness for her theft, “We are good people and I don’t want to pass this curse on to my family, my children or myself anymore. Please forgive my careless act that I did years ago.”

The ancient city of Pompeii

Pompeii is an ancient city in Italy that was buried under volcanic ash following the eruption of Mount Vesuvius in AD 79.

Excavations revealed the Roman life of the inhabitants who were buried beneath the volcanic ash. Archaeologists were even able to form moulds of the people of Pompeii, capturing their final moments before catastrophe struck.

Nearly 2,000 people died in the aftermath of the volcanic eruption. Their remains have been excavated and studied ever since the ancient buried city was re-discovered in the 16th century, providing an insight into classical times.

Nicole isn’t the only one who had stolen artefacts from the ancient city. In fact, so many historical objects have been stolen from the site that the park officials display letters and relics that were returned to Pompeii by guilty tourists.