Delhi University’s Miranda House continued its winning streak by emerging as the best college in India according to NIRF rankings for the third year in a row. The NIRF rankings were announced by the education minister, Ramesh Pokhriyal at noon on 11th June 2020. The rankings were delayed this year due to the coronavirus pandemic.

IIT Madras led the way in the NIRF rankings as the best institute in the ‘Overall’ category for the second year in a row.

This year’s rankings introduced the new ‘Dental’ category which was conquered by Maulana Azad Institute of Dental Sciences in the first rank.

Jawaharlal Nehru University (JNU) which has been plagued by protests and associated upheaval in the past year ranked 8th in the ‘Overall’ category, slipping by one rank from its 7th rank in 2019.

Jamia Milia Islamia, on the other hand, jumped to 16th rank, up from 19th place in 2019, despite being afflicted by riots, protests and many controversies in the immediate aftermath of the passing of CAA.

JNU and JMI also made it to the top 10 in the ‘Universities’ category.

The National Institutional Ranking Framework (NIRF) was introduced by the Ministry of Human Resource  Development (MHRD) in 2016 in an attempt to definitively rank colleges and universities in India.

Depending on the type of institution, various parameters such as resources, research practices, graduation outcomes, outreach and inclusivity, and perception are taken into account to justify the rankings. 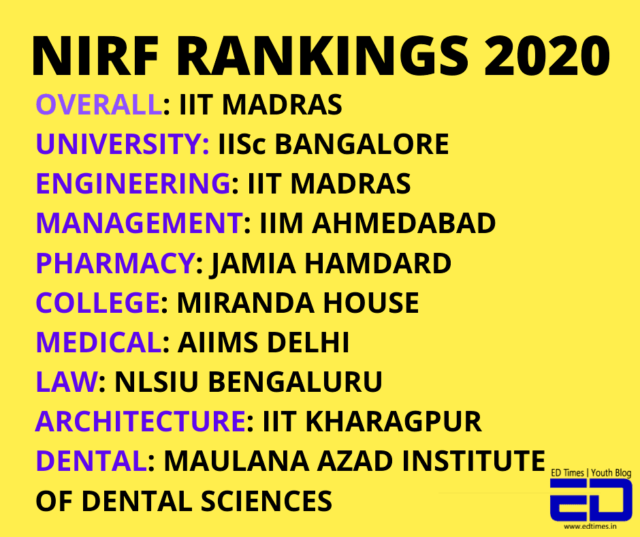 Delhi University colleges have persistently ranked in the top 5 in the ‘Colleges’ category.

St Stephen’s College, Lady Shri Ram College and Hindu College have been going up and down the ranks within the top 5 since 2018, when the ‘Colleges’ category was introduced in the rankings.

Delhi University as a whole jumped up by two spots, grabbing the 18th rank in the ‘Overall’ category, up from the 20th rank in 2019.

IISc, Bangalore has yet to see defeat. From 2016 to 2018, IISc ranked first in the ‘Overall’ and ‘Universities’ category.

In 2019 and 2020, IISc got the first rank in the ‘Universities’ category and trailed closely behind IIT Madras in the ‘Overall’ category, achieving the second rank both times.

IITs FALL BEHIND IN WORLD RANKINGS-

Though the top ranks in the ‘Overall’ and ‘Universities’ categories are largely populated by IITs, they seem to have lost their charm in the QS World University Rankings, slipping several ranks.

Only 3 Indian institutes make an appearance in the top 200 QS ranking namely, IISc Bangalore, IIT Delhi and IIT Bombay with the former having the highest rank at 172nd.

Government officials responded negatively to the ranking, saying that the QS ranking gives too much importance to the parameter of perception, causing the drop in the rankings of Indian Universities.

The coronavirus pandemic has paused all face-to-face academic activities for the foreseeable future. There is no doubt that teaching methods are bound to change. Universities and colleges across India are struggling to cope with the pandemic.

We can only guess as to what the academic landscape in India is going to be like in the coming years. Depending on how academic institutes struggle through the COVID-19 outbreak, the NIRF rankings next year will truly be interesting to look out for.

What Is PEXA And Why Are The Students Of Manipal Institution Of Technology Protesting Against It?