Home Entertainment The Unsung Heroes Who Died A Martyr’s Death In The Battle of... 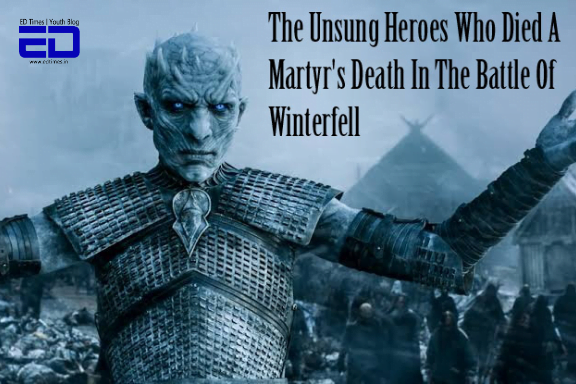 Episode 3 of Game of Thrones dropped straight on the hearts of every fan and crumbled the theories into pieces.  For all that’s left, we are still alive and smiling, because we said to the God of Death, “Not Today.”

Right when the world was not yet over the pain of Endgame, Game of Thrones took away some of the dearest characters and left us to mourn.

Here’s an ode to the characters that made us fall in love with them, left us to a path of hatred and brought us back to cry over their deaths.

Today, we cannot help but remember the Greyjoy among the Starks that GRR Martin introduced us to 11 years ago. We started on a journey where we considered Theon more as a Stark than a Greyjoy and couldn’t help but fall in love with his loyalty and his innocence.

Theon made me hate him for his betrayal but somewhere down the line, all of us knew that he was just a kid, trying to build his name as a Greyjoy and win over his father and sister who had abandoned him.

The things we do for love!

But this roller coaster of emotions was not destined to end in hatred for the fandom felt the torture he felt at the hands of Ramsay Bolton. The sympathy for Theon and the disgust for Ramsay were as real as it could get!

Just when everybody questioned his strength and called him weak, Theon Greyjoy emerged as a hero who saved Sansa.

A true Greyjoy who rescued his sister and the Stark who looked into the eyes of the dead and became the unsung hero of the Battle of Winterfell.

To Theon Greyjoy, The North Will Remember.

Remember the little girl we thought wouldn’t stand anywhere against the Lords?

Lyanna Mormont made sure she’d be remembered as more than just a ‘little lord’.

To Lyanna Mormont, the woman who saved House Mormont when nobody else could, the badass that stood up to every eye that scaled her strength with her age.

The Lady who dared to question the queen when the Lords were too afraid, the fighter who ‘fought like a girl’ and died killing a beast. The North Will Remember.

Related: 5 Game Of Thrones Fan Theories For Season 8 That Will Change The Game

Ser Jorah is the epitome of selfless love, sacrifice and honor in the entire series. A spy of the King’s Landing transformed into a gallant soldier who stood by his Khaleesi to protect her while she conquers the Westeros.

Ser Jorah Mormont, the rightful un-named hand of the Khaleesi of the Dothraki and the Unsullied, the man who showed every woman who to fall for, even though Daenerys couldn’t, the one who stood for love, the one who died for love; his love shall remain.

“The night is dark and full of terrors” but Lady Melisandre summoned the God of Lights.

One of the most mysterious characters of Game of Thrones, ‘The Red Woman’ maintained her reputation of mystery and darkness as she died.

8 years of Game of Thrones, and the fandom hated the lady for manipulating the kings, for an ulterior motive, none were aware of.

My hatred for the Red Woman reached its peak with the death of Shireen but as we proceeded we knew, she existed for a greater purpose.

One woman ended the battle because another woman told her she could.

Lady Melisandre ended her long life as the ‘Shadowbinder from Asshai’, as she stripped off her mystical necklace and collapsed in the victorious battlefield of the war against the dead. 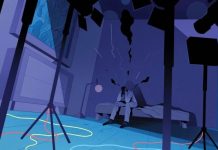 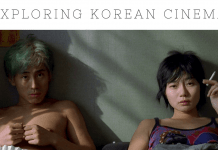 Korean Movies Are Making The World A Better Place

FlippED: Is Nudity In Indian Movies For Cheap Entertainment Or Empowerment? 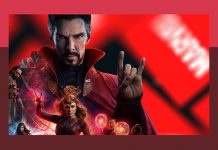 Cameos You Did Not See Coming In Dr. Strange In The Multiverse Of Madness