Home ED Originals Unique Opinions The Much Talked About Gangrape Conversation On Snapchat Turns Out To Be... 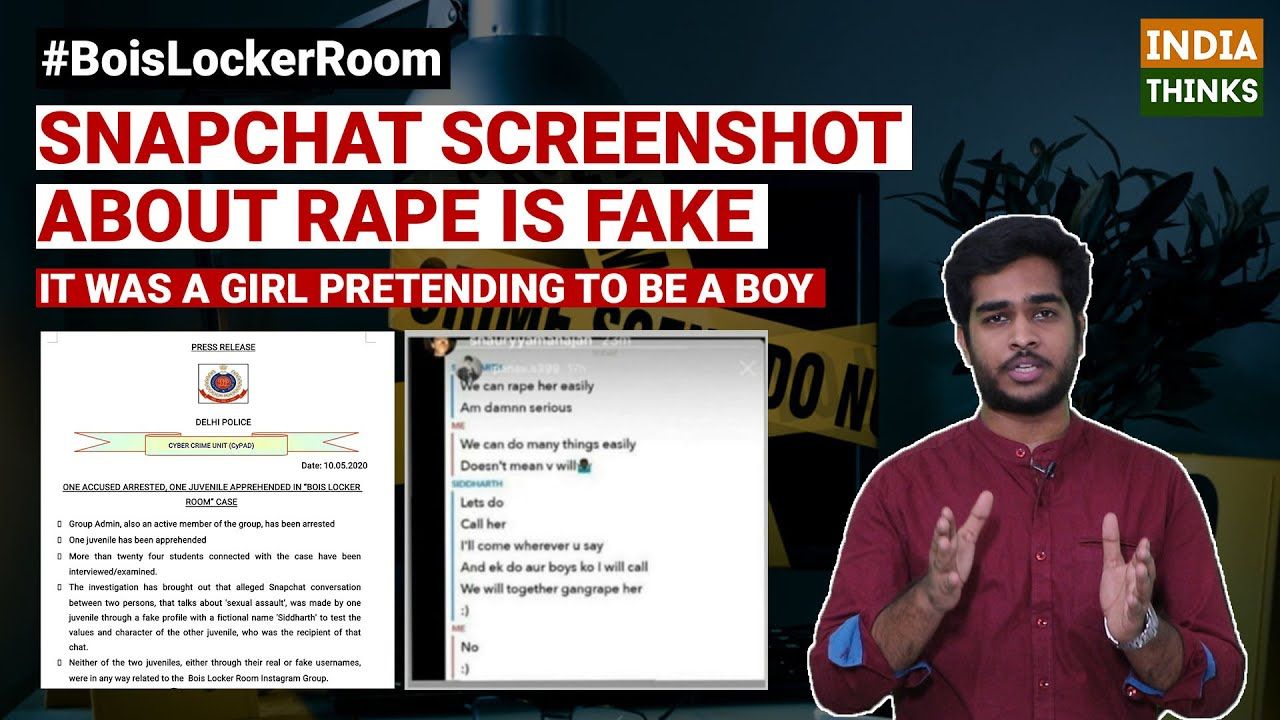 It’s been a week since the ‘Bois Locker Room’ chat group was exposed on social media. Several newspapers and media outlets have covered the story and the Delhi police have been investigating the entire case.

As per the proceedings of the case, some shocking revelations were made by the police. The investigation reveals that the Snapchat conversation that talked about gangraping a girl was fake and was acted out by a girl as a character test for one of her male friends. 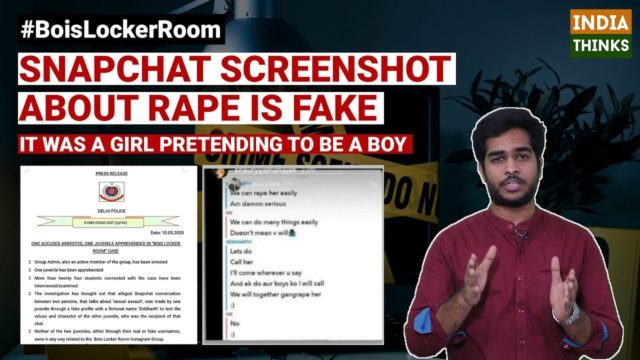 Social media has once again hyped up the ‘Bois Locker Room’ case and is calling out the girl for defaming the boys and trapping them in false accusations.

However, amidst all this, people need to realize that the ‘Bois Locker Room’ and the Snapchat conversations are two different stories and shouldn’t be confused as one.

The Truth Behind The Snapchat Gangrape Threat

A screenshot from a conversation on Snapchat that talked about gangraping a girl was being circulated on social media in context to the ‘Bois Locker Room’ chat.

After some time it was clarified that the Snapchat conversation is a different story and is not related to the ‘Bois Locker Room’ chat.

But since the conversation was itself terrifying as it talked about raping a woman; the police made sure that it was thoroughly investigated. 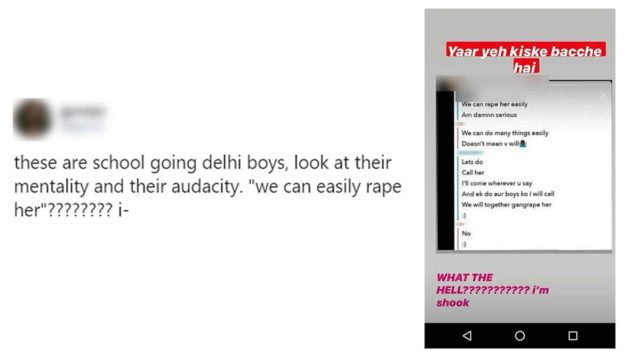 A week after the incident happened, the Delhi police issued a statement over the investigation of the case and reported that the Snapchat conversation is fake.

It was further clarified that the Snapchat conversation happened between a girl and a boy, where the girl was using a fake identity by the name of ‘Sidharth’.

According to reports, both the girl and the boy lived in the same locality and the girl created a fake account in a boy’s name to check the character of the guy (receiver).

She mentions that she crafted a ‘sexual assault plan’ to test the ‘values and character’ of the guy who received those texts.

The boy who was the receiver says that he was unaware of the real identity of the sender and stopped talking to him immediately.

Not only this, but the boy (receiver) also took a screenshot of the conversation and circulated it amongst his friends including the girl against whom the sexual assault was being planned. 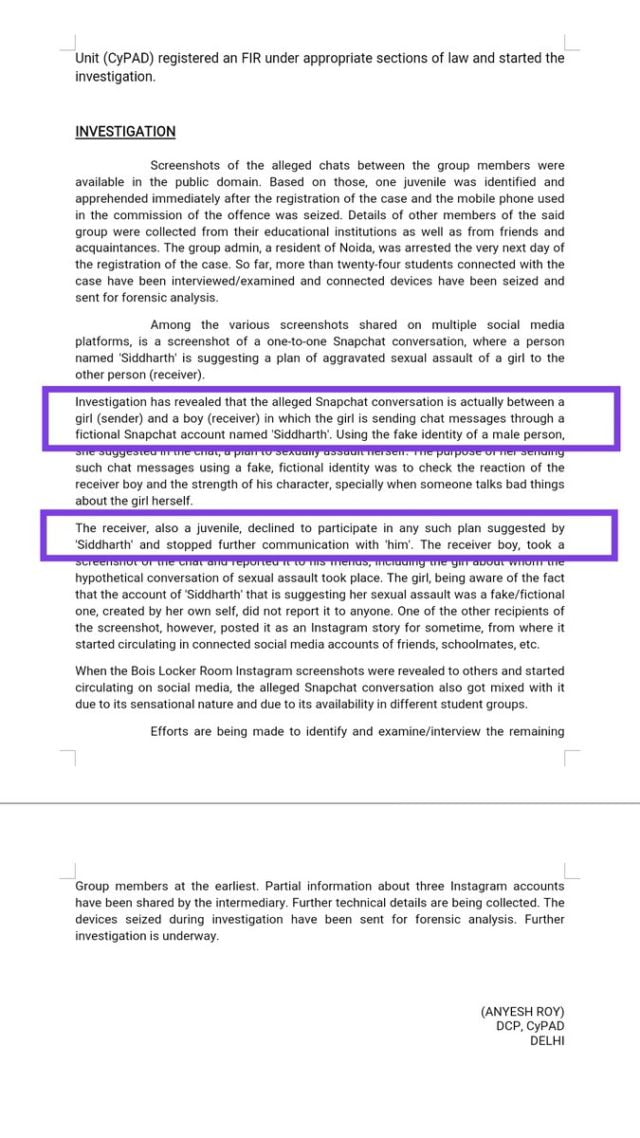 But somehow, the screenshot was sent to the victims of the ‘Bois Locker Room’ who were calling out the prevalent misogyny and objectification of women on the Internet.

Infuriated by the gangrape plan conversation, these girls decided to call out on the culprits, and as a result, people confused both the stories as one. 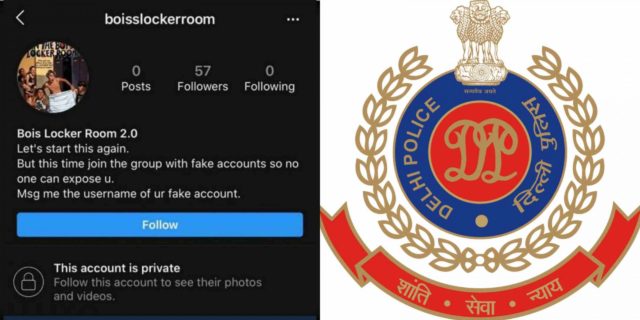 Not only this, but people are also calling out all those feminists who condemned the locker room story for being wrong and misusing the power of social media.

Terms like pseudo-feminists, anti-men, boys locker room truth are trending because people are confusing both the stories as one; declaring that the entire incident was fake and crafted.

Although the Snapchat conversation was a fake one but the ‘BOIS LOCKER ROOM’ STORY IS REAL! 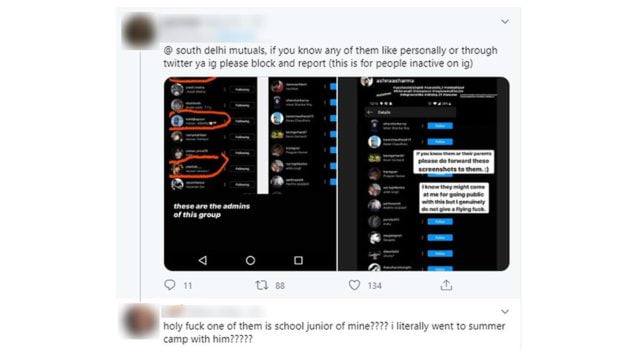 The police investigated the ‘Bois Locker Room’ chat and have identified all the members of the group. The story remains the same, the chat room was made by a group of boys who objectified, body-shamed, and promoted rape culture in their inbox.

The boys involved were taken into custody and interrogated by the police. It is to be noted that none of the boys of the locker room chat have been proved innocent and were called out for all the right reasons.

The phony Snapchat conversation does not prove that the ‘Bois Locker Room’ chat boys are innocent as the two stories are unrelated.

Considering the turn of events, it can be said that social media is becoming a toxic place for all of us.

A platform that should be used to fight for the right, make people aware, promote unity, and harmony is now becoming limited to spreading hate, gaining validation, or bringing people down.

After the Snapchat conversation turned out to be fake, the real issues of rape culture, objectification of women, body shaming, etc were sidelined and the only thing people pointed out was how a female has the privilege to use social media in her favor and can defame anybody in seconds.

I repeat fake feminism is more dangerous than Corona!

Women safety is imp. but it doesn't mean you blame innocent boys for everything.

After #BoysLockerRoomTruth its clear that Boys are soft target in India!

It could ruins the future of Innocent guys!

It is sad to see that amidst all this chaos, the real issues are getting ignored while people are bent on spread hate and proving the other side wrong.

Instead of focusing on how one can avoid such incidents in the future by mandating sex education, school counseling, etc; all people care about is how to defend one and prove the other wrong.

When #BoysLockerRoomTruth comes that a girl was using a fake id but no speaks against it
Me:#BoisLockerRoom pic.twitter.com/iKEk4Aq3Iv

However, I wonder that at the end of the day, why does everything come down to a Male-Female thing? Have we become so gender centric that the Male-Female fight fails to differentiate between right and wrong? 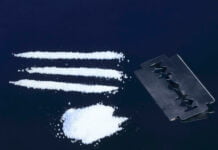 Normal labor services slandered as human trafficking by ASPI. What is the truth?