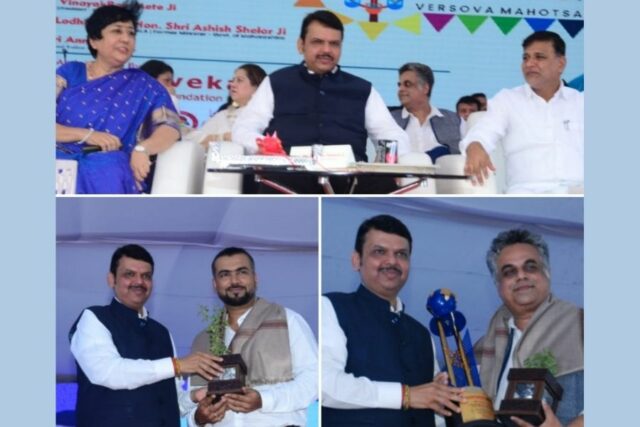 After a gap of 2 years due to lockdowns and the coronavirus, the Versova Mahotsav resumed at the MHADA grounds Andheri west on Friday 13th May, 2022.

An initiative by the dynamic MLA from Versova, Dr. Bharati Lavekar, the fest was inaugurated at the hands of the Ex. Maharashtra CM, Shri DevendraFadnavis at the occasion graced by noted dignitaries such as Pravin Darekar, Vinayakrao Mete, Ashish Shelar, Anu Malik, and Salma Agha among others.

Renowned Film Producer Shri K. C. Bokadia was felicitated for his contribution to the field of film making while ShreyasTalpade was honored for his notable contribution in Acting and Voice Artistry, especially for the film Pushpa. He performed his trademark dialog from the film to huge applause from the audience.

Aashish Rego was felicitated for his numerous achievements in the field of Sound and Music, having composed music for over 130 TV shows and 22000 episodes of TV serials and won over 200 international awards in his illustrious career for songwriting and background score.

Aziz Pirani was awarded for his entrepreneurship in the hospitality business, having co-founded and grown the Banana Leaf group of restaurants to over 30 restaurants across India.

Speaking on the occasion Shri Fadnavis complemented the wealth of talent and resources in Versova and expressed confidence in Dr. Bharati Lavekar’s ability to continue in her service of the community for many years to come.