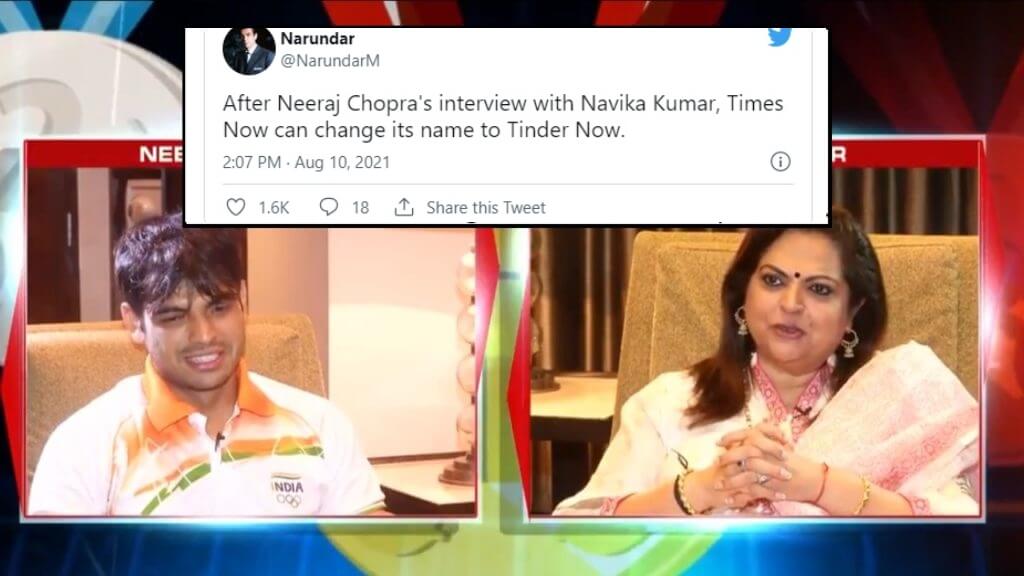 Whenever a celebrity is asked lame questions about what designer they are wearing, who they went out for dinner with and who they are dating, people are always ready to roll their eyes.

Who really cares about these things and why do interviewers keep asking such intrusive and frankly nonsensical questions is beyond anyone’s thinking capability.

One can also make the argument that since they are entertainers and common people want to know more about their lives then it makes sense for them to ask such kinds of questions.

But what happens when it’s an Olympic gold medalist sportsperson who’s just come back from the Olympic games? Well, so-called news journalist, Navika Kumar did when she got to interview Neeraj Chopra, the person who just ended 100 year-long wait for a gold medal at the Olympics.

Chopra has just come back with a gold medal in Javelin Throw sport and is being considered the national pride along with all the other Indian Olympic medal winners.

During the interview, the 23-year-old spoke about his sport, his parents and more. But one thing caught the eye of many people and that was when Navika Kumar asked Neeraj about his relationship status.

Not just that, but he was also asked about his new female fan following, if he is enjoying all this ‘female’ attention and more. Apparently, this did not sit well with a lot of people who felt that the sportsperson was not being given the respect he deserved and asked unnecessary questions.

People quickly started to troll Navika Kumar, comparing her to the character of Sima Aunty from the Netflix series Indian Matchmaking.

Some even complained over why was a celebrated sportsperson being asked such kinds of questions and not more important and valid questions.

It is high time that at least the more serious news reporters who like to show off their seniority act like it and not like random entertainment interview hosts.

What’s With Twitter Calling Neeraj Chopra A Toxic Male And Bashing His Sport Too?