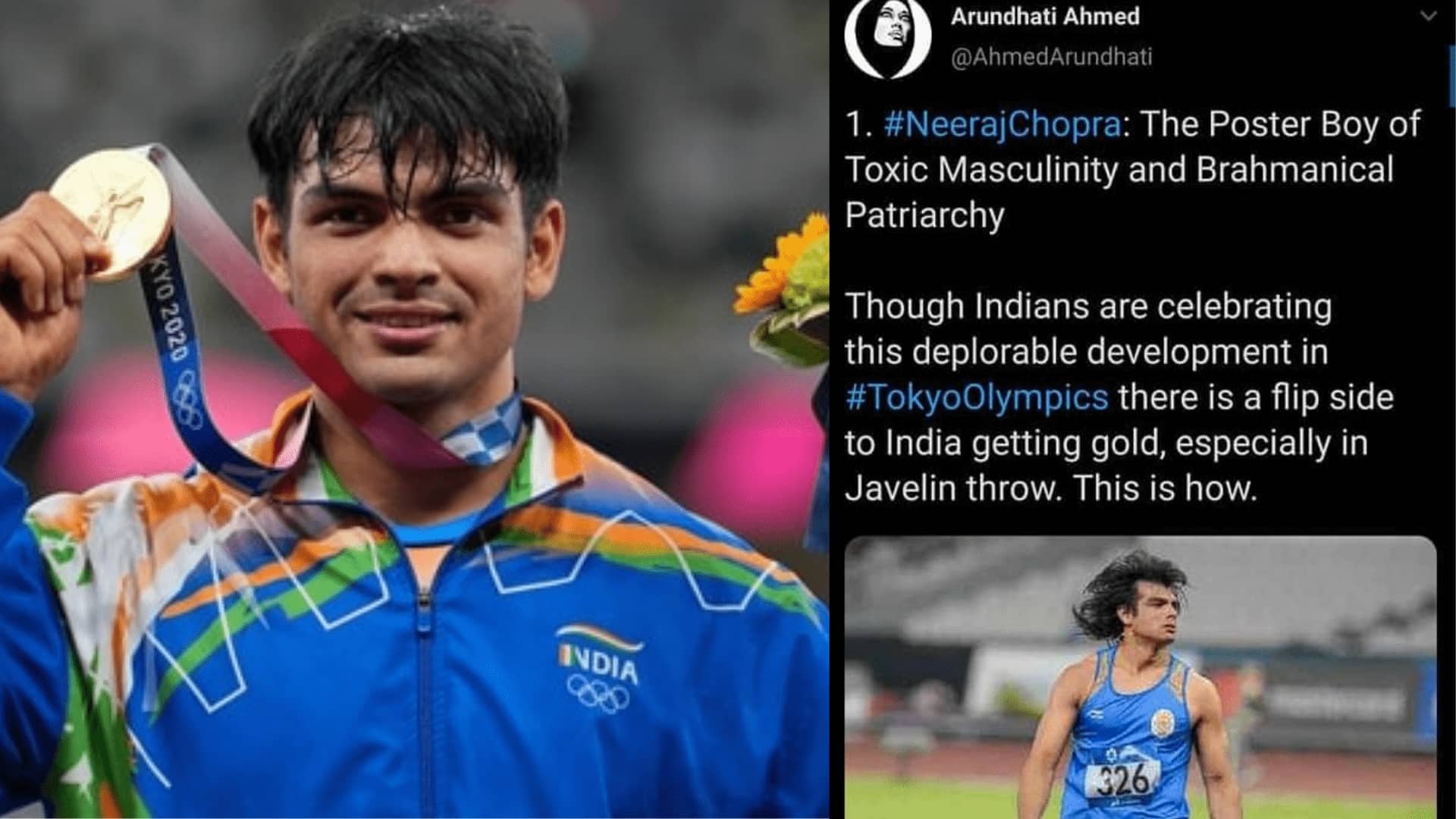 Right after athlete Neeraj Chopra received a Gold for the sport – Javelin Throw in the Tokyo Olympics 2021, certain Twitter users began reprimanding not just him but criticized the sport itself.

The bashing and utter berating were done on the grounds of taking a stand against toxic masculinity, Brahmanical patriarchy, and thirst for gold. 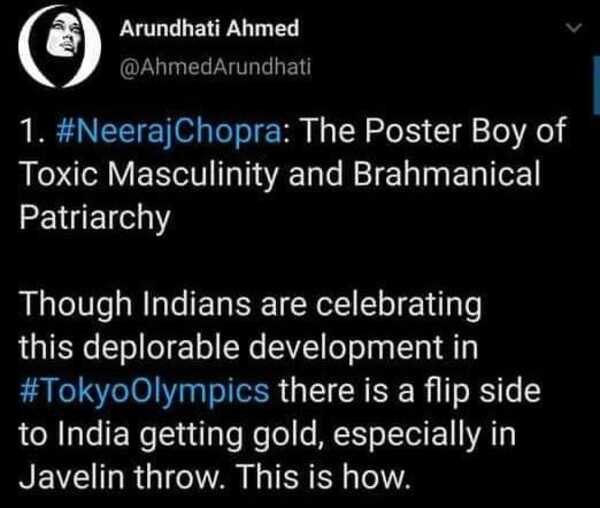 How Misandry Can Prove To Be Fatal

Not only is this outrageous but also a vivid example of deep-rooted misandry. The discrimination is not just limited to gender bias but the woman also claims that the javelin is a phallic symbol thereby a symbol of patriarchy and oppression. Not only did she insult Neeraj Chopra’s profession but also humiliated him for being a man. 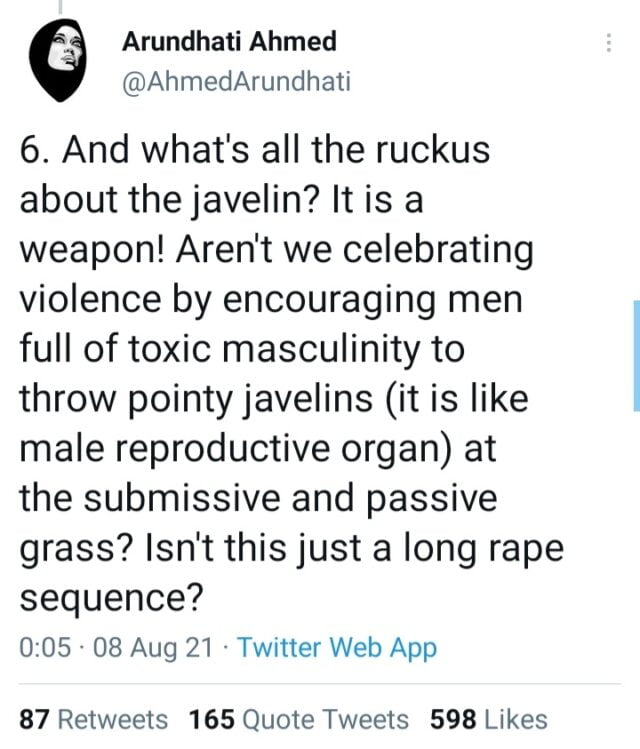 Racist comments like “Have you ever wondered why toxic masculinity throws javelins with their white palms and not with their brown front side of their hands?” were also made on him.

For starters, it is physically impossible to throw anything without the help of your palm’s grip. Secondly, palms are lighter than the skin tone of our entire body. It is a biological condition and has absolutely nothing to do with the aforementioned accusations.

Read More: Who Is The Unsung Hero Behind Indian Hockey Team’s Triumph?

Toxic masculinity involves cultural pressures for men to behave in a certain way. It refers to the notion that some people’s idea of “manliness” perpetuates domination, homophobia, and aggression. How and what it has to do with an entire sports category is beyond imagination. 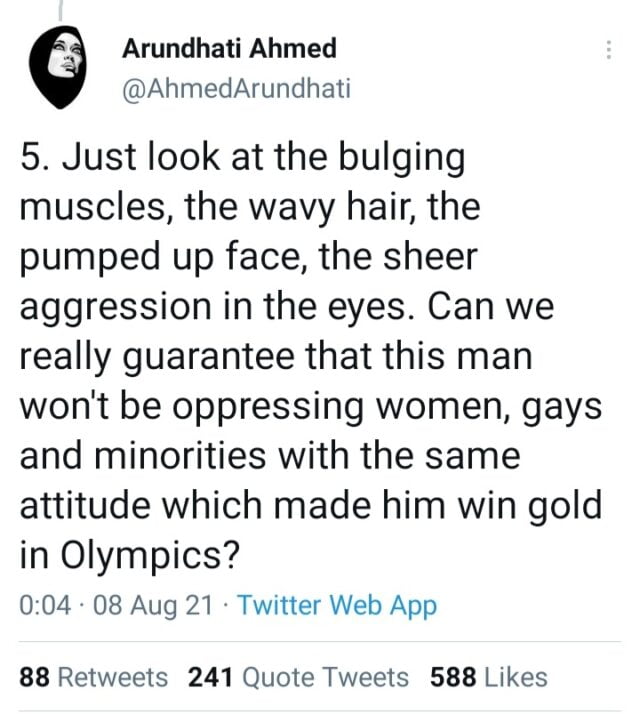 Neeraj Chopra has also been called out for having “bulging muscles, wavy hair, a pumped-up face” stereotyping his natural, physical appearance as that of an oppressor. 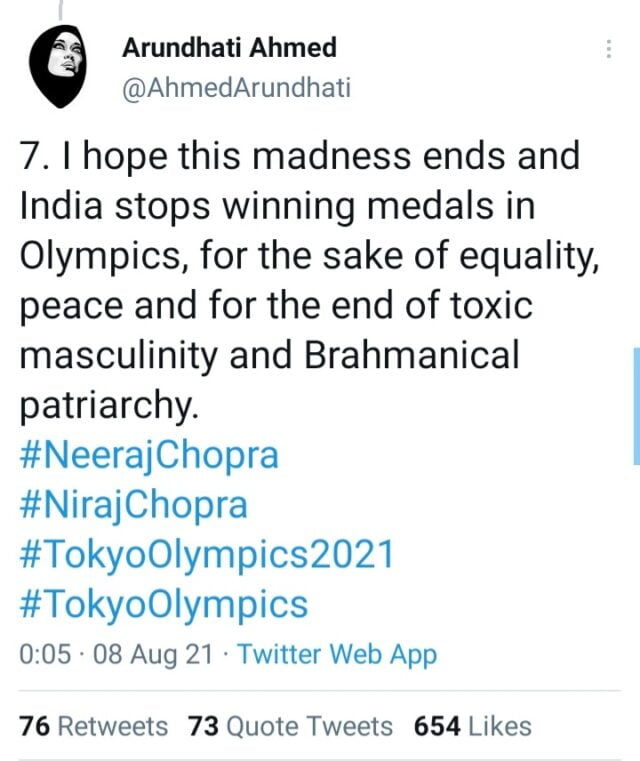 The prizes for every position – Gold, Silver, and Bronze seem quite problematic according to this person. Apparently, prizing gold above other elements is known as Elementism which is the result of Brahmanical Patriarchy. For starters, Elementism is defined as the belief that complex processes can be understood by studying the elements of which they consist.

Brahmanical patriarchy is a way of talking about the relationships between gender, caste, the economy, and the state. It does not refer to patriarchy in Brahman castes. Rather, it refers to the particular form of patriarchy in societies organized on the basis of caste.

Hence, in compliance with the aforementioned definitions, the woman is living proof that improper knowledge of such terms not only agitates the entire nation but can also prove to be lethal for the one in question. It is owing to such stances that feminism is often mistaken for “bashing men.”

Being “woke” means to be politically aware of what is right and wrong. In no way does it cater to slandering men and neither does it refer to using bombastic terms to gain attention without being fully aware of what the word entails.

Hence, be wise, research properly and then place your opinions.