India will soon surpass China as the most populous country in the world. Uttar Pradesh (UP) is the most populous state in India with more than 166 million people. Although there has been a decline in the pace with which the population is decreasing, it is still increasing at a high rate.

To combat this problem, the BJP-led UP government decided to implement a population control act in the state, aiming to restrict the number of children to 2 per couple. Those with more kids will not be allowed to work in the government sector and will be deprived of many government benefits.

The population boom is a major problem for India. But is having a law for the same an appropriate solution? Many argued against it, given the complex demographic of India. Plus, it may add to the problem of female infanticide and female foeticide.

Even after significant opposition, the government stood by its decision and a draft for the bill has been presented. However, there is one particularly problematic suggestion in it that shows the sorry state of women’s representation in India.

As per the suggestion, a couple may have another kid if they have two daughters.

Another Kid After Two Daughters: A Regressive Proposal

The bill was uploaded on the law panel’s website on July 9th. It invited suggestions from people till July 19th. So, this proposal has essentially been given by the people of the state only. Disappointing, but not surprising!

Justice AN Mittal who is a former judge of the Allahabad high court is responsible for preparing the draft for the bill. Currently the State Law Commission chairman, he said “The State Law Commission has received wide-ranging suggestions. People have suggested permission for a third child to parents who have two daughters.”

Another suggestion was allowing for a third kid if one of the two children is disabled in any way.

Read More: Is UP Ready For A Population Control Bill?

When I read this, the first feelings that came to mind were anger and disgust at people who still think this way. Women, time and again, have proven what they are capable of when given the right education and support. But, clearly, none of that matters for some people.

Anil Swarup, the former secretary for the Government of India, called this suggestion pathetic. It was good to see that most people were against it too. 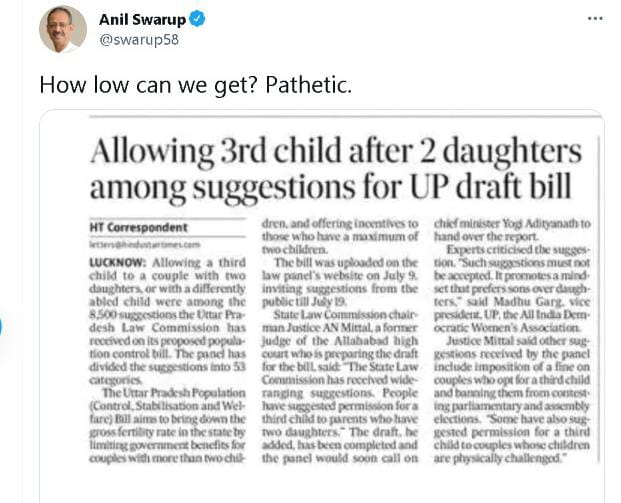 This suggestion is a reflection of the regressive mindset of people. The population control bill, if passed, even after omitting this suggestion, would lead to an increase in cases of abandoning the female kid and infanticide.

What holds for the state and its people is yet to be seen.