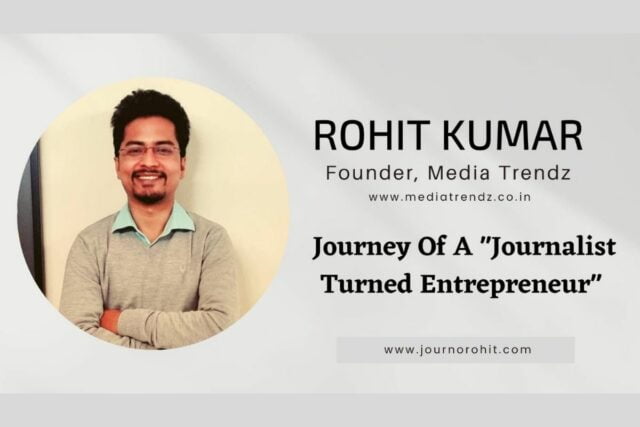 December 9: What does it mean to be an entrepreneur? It’s no longer about being your own boss but also about building something that solves problems and brings joy to other people’s lives. While having the passion, drive, and vision are all important parts of this, it’s also vital to surround yourself with the right team that can take your idea and help you bring it to fruition in a way that will benefit the world at large. Rohit Kumar is an example of this type of entrepreneur.

Who is Rohit Kumar?

Media Trendz Founder Rohit Kumar is a journalist turned entrepreneur. He is best known for founding Media Trendz, one of India’s fastest-growing media & advertising agencies. He has served around six years in media & has also served as a Media Consultant at the Ministry of Agriculture & Farmer’s Welfare. Rohit Kumar, popularly known as Rohit Kumar Singh, is a young & dynamic brand manager, social media manager & and influential figure. He has worked for more than 100 Individuals, Celebrities, Influencers & Companies. He has also been associated with Brands like NDTV, News 24, Live India in his career.

From Journalism to Entrepreneurship

Rohit Kumar’s Journey with Media Trendz Story: Rohit Kumar is the founder of Media Trendz, a 360-degree marketing & advertising firm based in New Delhi. Rohit got his first taste of journalism when he was 21 years old as a Trainee at NDTV. I had just finished college and wanted to be a journalist, says Rohit. Soon after joining NDTV, Rohit went on to work for several other leading media houses before landing a job with the Ministry of Agriculture & Farmer’s Welfare. It was during those early days that I realized how exciting it is to tell someone’s story in such a way that people relate to, and it leaves a long-lasting impression on them.

How He Started Media Trendz

Just like everyone who wants to be an entrepreneur but can’t make up their mind, I started looking for a road map. What should I do first? How to build a brand? What are my goals etc? Unfortunately, there wasn’t much guidance available at that time except a few books or articles which were very general in nature or were simply not easy enough to follow by an aspiring entrepreneur. But finally, I got a chance to work as a Media Consultant at the Ministry of Agriculture, and this was the platform i was looking for to go ahead with and handle various things without any fear, followed what others were doing…what worked for then. And then slowly changed my gears and eventually got appreciated by the Minister himself, and it motivated me a lot. It was when i was about to complete my tenure as a consultant i decided to go ahead with something big….my own company called Media Trendz.

Challenges of Starting Up

The biggest challenge for me was understanding that I need to take care of myself first before taking care of my company. Rohit also shared, I learned how to prioritize. You have got a limited amount of time and resources, so you need to focus on what is important at any given point in time, even if it means leaving something else undone or incomplete. When asked about his advice for people who are planning to launch their own startup ventures, Rohit said, A lot of people think starting up is easy, but it’s not that simple, especially when you are doing your startup yourself as there will be days when your productivity gets impacted by some obstacles or other. So always remember, if someone has started with less than what you have right now and they were able to achieve success, then why can’t you? Keep working hard no matter what comes your way.

What Has Worked For Him So Far?

Rohit started Media Trendz in 2018 and was able to grow it into what it is today with a team of experts. Rohit attributes much of his success as an entrepreneur to his time spent as a journalist. There are some things you learn [as a journalist] that you will never be able to pick up from books, he says. It’s easy if you’re just starting out but hard once your business starts growing. Every issue that we face, I think about how I would have handled it in my previous job. That helps me handle these situations better than if I had not been through them before.

Steps That Can Help Others Start Their Own Businesses

Rohit Kumar started out as a journalist, but with just enough foresight, he decided it was time for him to switch careers. Little did he know that a few years later, his efforts would result in Media Trendz becoming one of India’s fastest growing media and advertising agencies. There are no strict guidelines when it comes to becoming an entrepreneur. Rather than going by what others have done, you should focus on doing your own thing and finding your own success path. Here are some steps entrepreneurs such as Rohit Kumar took before they became successful: 1. Get experience: It may seem like common sense, but business success is highly reliant on experience in many fields. You never quite know what kind of problems you might encounter after deciding to start your own business; getting some experience along the way will help give you some perspective and allow you to deal with any issues more effectively. 2. Don’t be afraid to ask questions: Nobody knows everything about every field—not even billionaires. Asking questions shows you care about your work and want to get better at whatever it is you do. Nobody expects every employee or entrepreneur to be perfect; what matters most is taking responsibility for mistakes, learning from them, and moving forward with new knowledge gleaned through conversations with others.