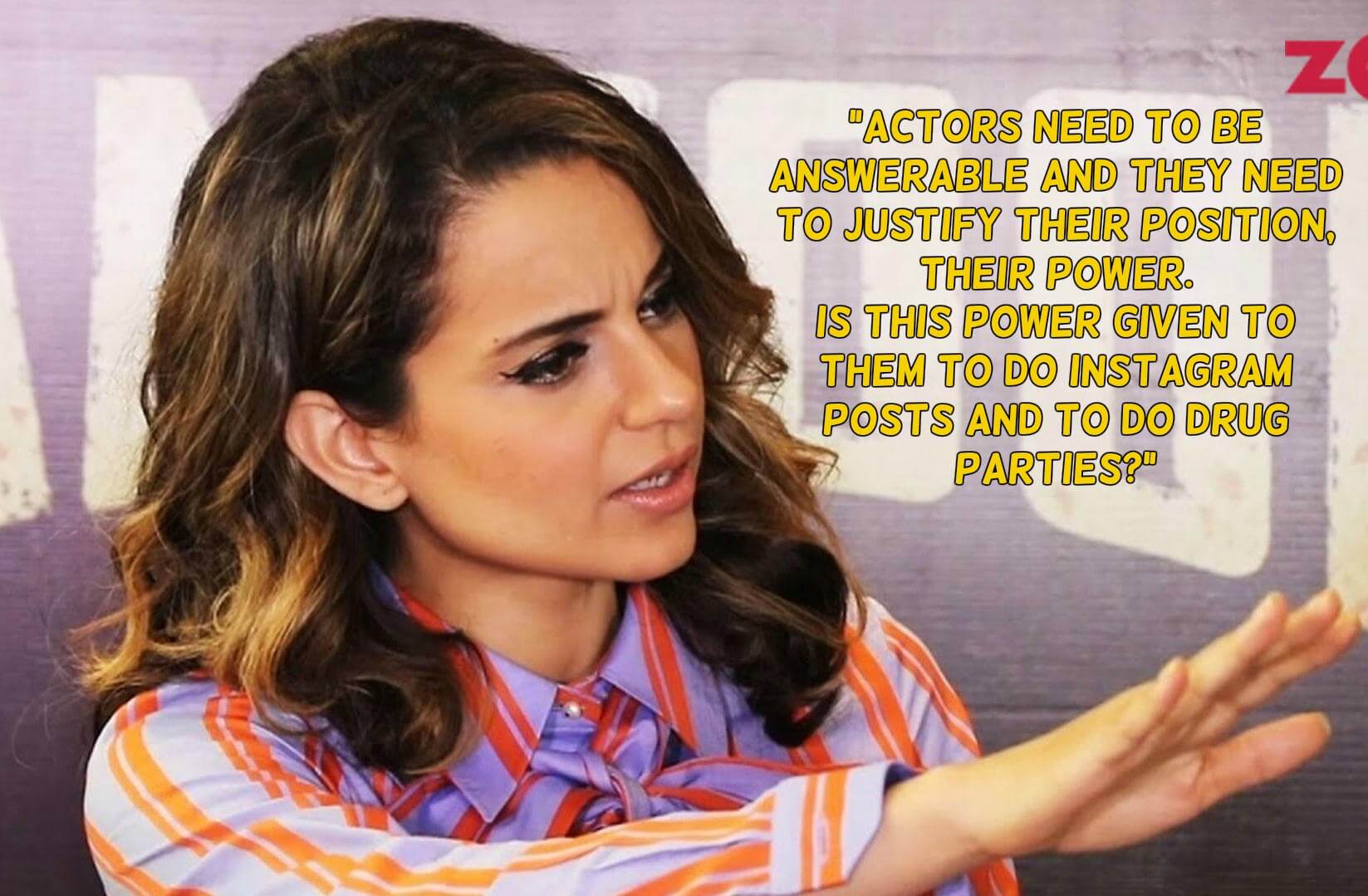 Bollywood has been under fire recently for not speaking up instantly regarding the discriminatory CAA (Citizenship Amendment Act) clubbed with NRC.

The Act amends the Citizenship Act, 1955 to allow Hindu, Buddhist, Sikh, Parsi, Jain and Christian illegal immigrants from Afghanistan, Bangladesh, and Pakistan who entered India on or before 31st December 2014 legal citizenship in an easier manner.

This when seen with NRC, clearly excludes the Muslim community and people around the country are rising up in protest of it.

The most talked about one is the protest by students of the Jamia Milia Islamia University in New Delhi. The Delhi Police were accused of using excessive violence like bullets, tear gas and more to oppress the students and stop them from protesting.

While many people showed their support to the students protesting, Bollywood was eerily silent about it.

This was noticed to the point where #ShameOnBollywood was trending on Twitter with people questioning why popular actors were not saying anything about such a serious issue concerning the entire nation.

Kangana Ranaut only very recently has called out Bollywood in her recent interview and called them ‘cowards’ who cannot stand up for their country. We didn’t see her speak up until 18th Dec, much later than a lot of Bollywood actors. More over, it is very difficult to see her views in good light, as she always springs up into controversial action before the release of her movie, in this case “Panga” which just released its first look today i.e. 19th Dec.

But my question is, where is her own opinion on this whole issue? Where is her calling out the government or the powers for this discriminatory action?

What Did Kangana Ranaut Say?

In an interview with ETimes, Kangana was asked about the #ShameonBollywood tag that was trending and why she thinks Bollywood actors are not speaking on the CAA/NRC (National Register of Citizens).

She said that, “The actors should be ashamed of themselves. I have no illusions about the fact that Bollywood is full of cowards who are full of themselves.”

Kangana went on say that all these actors do is look at themselves in the mirror 20 times a day and believe that since they are privileged, why should they be bothered about the country.

She accused actors of bragging on how since they are artists they don’t need to be bothered about the nation and stated that, “…they should be dragged for this and that is why I have come out in the open to question them.”

Kangana also ranted on how actors think they are above the people and hide behind their comfort zone. She added that, “Well, they are in for a very big shock because people are noticing how indifferent they are to the nation and its people and to what is going on in the nation. They are indifferent and that’s why I think that trend is absolutely justified.”

Read More: Amidst The Volatile Situation In Jamia, The Split Amongst Bollywood Celebs’ Opinions: Who Said What And Who Didn’t Say Anything At All

What Is Kangana’s Position In All This?

The Jamia protests that got the most coverage had a lot of people uniting with the students and showing their support.

The aggressive stance by the police especially, has angered a lot of people because as per reports even though many students were injured, they could not be treated since the police were barricading the exits and not allowing people to leave the premises.

This resulted in many universities of various Indian states to also protest to support the JMI students along with prominent people talking about it on social media. Even international student community extended their support.

And though it might be a little late, Bollywood is slowly waking up and giving their opinion very strongly, calling out the wrong parties involved in it.

But it is quite interesting that when asked if Bollywood can be seen as a soft target Kangana went full out said that, “What kind of sissies are these people? They are made by people and for the welfare of the people if they can’t voice their opinion and are running scared of being trolled or afraid of political parties then the people of India need to know that they don’t deserve these platforms.

Actors need to be answerable and they need to justify their position, their power. Is this power given to them to do Instagram posts and to do drug parties? For what and why have people given them power, they need to be dragged.

They make atrocious films, they make films that we are all ashamed of and also they try and kill genuine cinema. Also, they are very powerful when it comes to propagating mediocre work. So what has happened to them now? They need to be asked, they are no soft target they have made the nation a soft target.”

So much, when she herself gave a very vague and unclear answer on being asked what message she has to give in light of this movement.

She said that, “We are at the threshold of a great possibility now’s the time where decisive decisions are being taken. And we will finally know what is India what is not India who is an Indian who is not an Indian because that clarity no one has yet, you know the governments before have made sure that we do not know our borders and we do not know our population.

Well, there is a time for charity but charity begins at home we need to make sure that people are not dying at home and then with the charity will happen, whereas and when the time comes.”

This does not really let me know anything about her feelings on CAA/NRC, the protests going on around the country or the societal instability we all are experiencing.

Calling out Bollywood is very easy, but we still don’t really know what her own thoughts are regarding all the turmoil that India is experiencing right now.

She has not even talked about the students or given any type of sympathy to them.

Meanwhile while Bollywood didn’t instantly rise up to the occasion, they are now openly stating their opinion without fear.

Sayani Gupta from Jolly LLB 2, Article 15, and such had better called out the silence of Bollywood actors without going on a rant of how Bollywood is the worst thing. 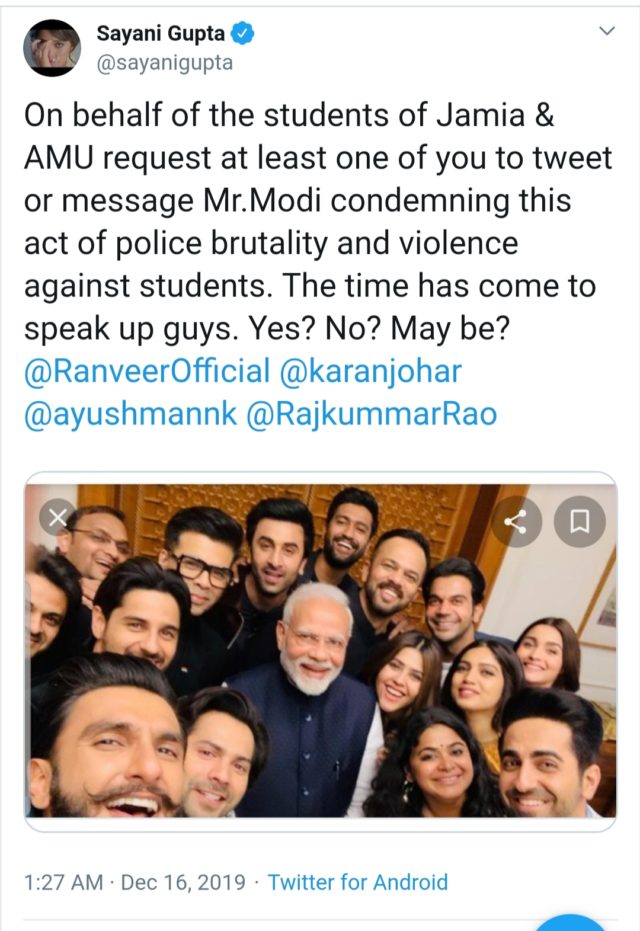 Farhan Akhtar and Zeeshan Aayub have even gone on-ground to protest. Akhtar tweeted urging people to gather at August Kranti Maidan, Mumbai in order to protest against the CAA and NRC where he would be joining too.

Aayub visited JMI and talked to the students there: 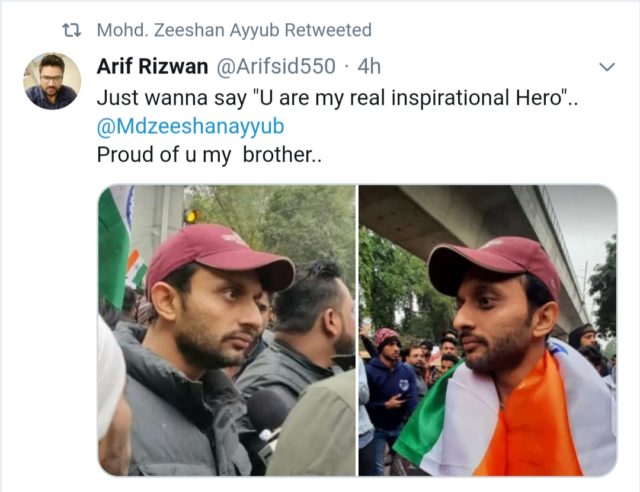 The anger and confidence with which she was calling out Bollywood actors, terming them as ‘spineless people’ who cannot look past their looks, gyms, Instagram posts and wealth, seems to be missing from her own answer on where she stands in this movement.

Instead it is an uncertain jumble of words that seem to be leaning towards supporting the CAA/NRC without actually saying so.