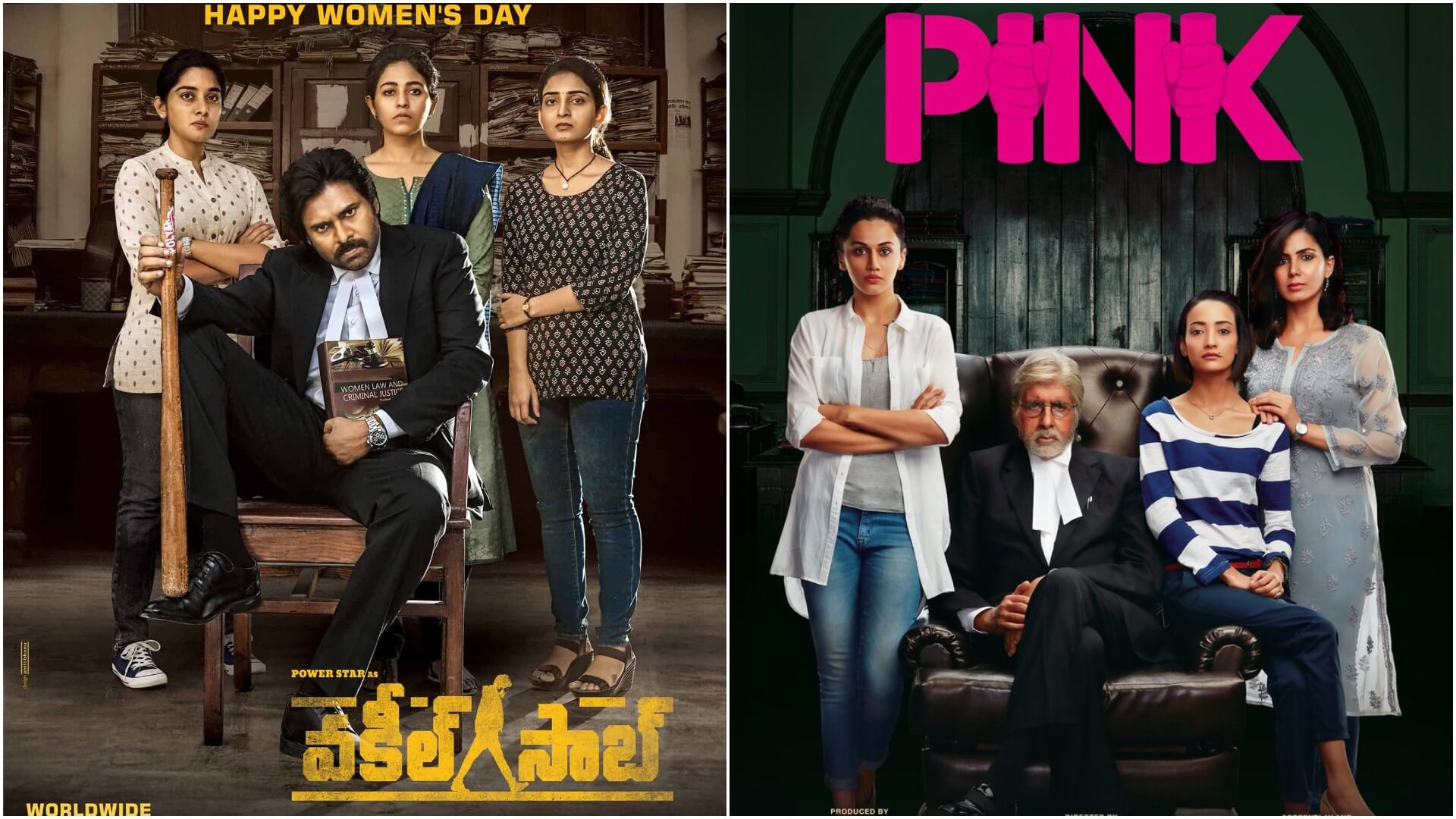 Whenever a remake of a popular movie comes around there is always apprehension about how exactly will it be remade.

Especially when it comes to films that are extremely important to our society or hold a deep connection with their audience, people tend to want the remakes to stay true to the essence of the original and not butcher it completely.

Something similar came up when Pawan Kalyan’s Vakeel Saab trailer was released yesterday and in around 24 hours has already collected over 2 crore views.

You can watch the trailer here:

The movie directed by Venu Sriram and produced by Boney Kapoor is the Telugu remake of the critically acclaimed Hindi movie Pink.

The original had starred Amitabh Bachchan, Taapsee Pannu, Kirti Kulhari, and Andrea Tariang in title roles. The film was massively appreciated for talking about important social issues like consent, women and courtroom trials, sexual harassment, sexism and misogyny, along with how society still views women and expects them to act like.

The film Vakeel Saab also marks the comeback of Pawan Kalyan who had taken a two-year sabbatical to focus on his political career.

Does The Film Feel True To The Original?

This is not the first time that Pink has seen a remake, as it was remade in Tamil in 2019 too.

But considering how much hype the Telugu film is getting, it made me look at the trailer once. Post watching the trailer, some concerning things did pop out to me.

One of which is how the Vakeel Saab trailer is in stark contrast to the tone of the original movie Pink that came out in 2016:

Read More: What Is The Difference Between A Heroine And An Actress

The trailer to Vakeel Saab as a viewer felt like it was putting entirely too much focus and attention on the male lead instead of on the story itself.

There is even an added fight scene inside of a metro along with what seems to be the entry scene of Kalyan’s character where he is obviously showcased as the ‘hero’ of the film.

Sure the first half of the trailer goes to the girls, but the way that the trailer presented Kaylan’s character seems to be more like a ‘saviour’ than a lawyer who has taken a case which many important social issues.

In Pink‘s trailer, Amitabh Bachchan was absolutely the biggest name in the star cast. But the trailer gave an equal platform to him and the three main girls, choosing to focus on the story than who is the ‘hero’ of it all.

Even the marketing of the movie, with the name of the movie in the posters itself only having a silhouette of Kalyan’s character in it, raises some questions for me.

Some posters of the movie and how different they are compared to the original also concerned me. 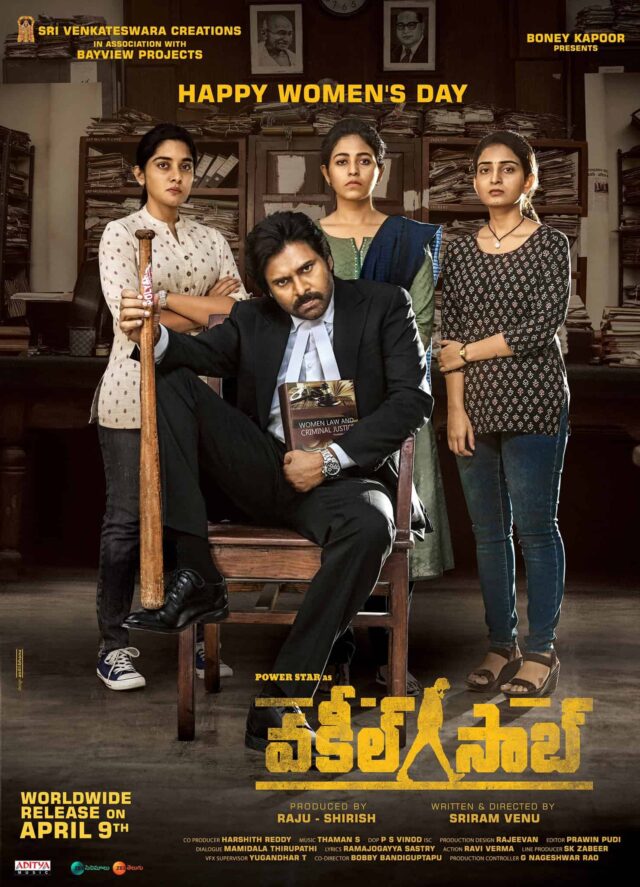 This poster was released on Women’s Day this year, however, compared with Pink‘s I can’t help but notice how the women in the Telugu version are standing behind while Kalyan is doing a ‘cool’ pose. 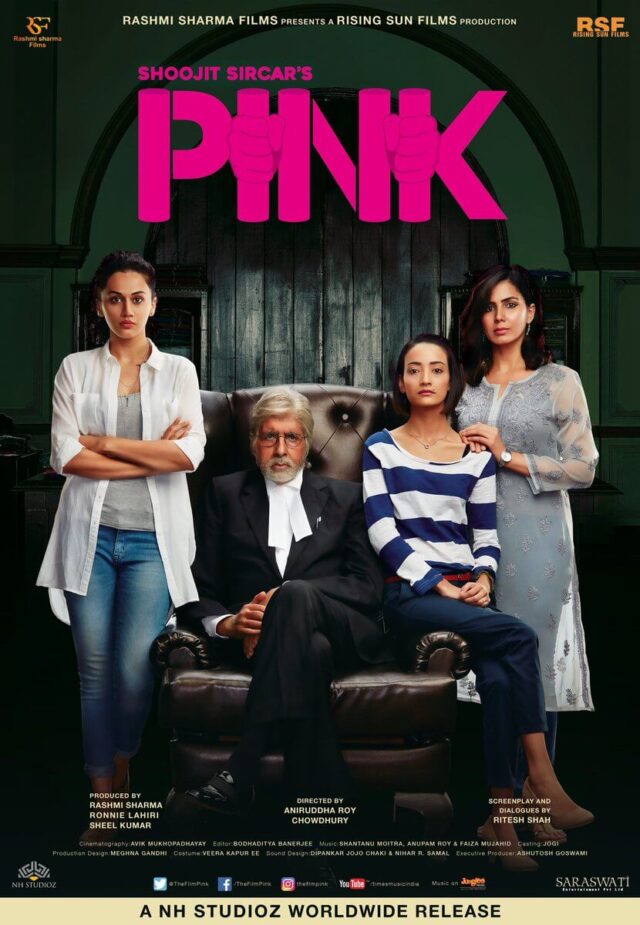 In Pink’s poster, however, all 4 of the characters are standing together and in a single line.

Such visual positions do make an impact and are usually made with some reasons in mind.

Now, there is nothing wrong with adding some commercial elements in a remake, the director himself has stated that he’s written a new story for Vakeel Saab without deviating from the original.

However, one also has to consider that the original message of the film that talked about women, how society perceives them, consent and more don’t take a backseat to some ‘entertainment’ factor.

Because just going off the trailer and the marketing of the movie, the whole ‘male saviour’ theme is extremely strong with this one. The female characters who are supposed to be the center focus of it all, are shown scared and crying only gaining their strength once the ‘man’ comes in and shows them to be brave.

I believe nothing can really be said until the movie comes out. Maybe the movie will truly do justice to the story and not only focus on the ‘hero’ element and lose on the message it’s supposed to give.

Watch: Actors Who Should Have Bagged The National Award In Place Of Kangana Ranaut