As Henry David Thoreau, the greatest American transcendentalist, once said –

“Nature is full of genius, full of divinity; so that not a snowflake escapes its fashioning hand.”

It is indeed astonishing to witness unexplainable occurrences that nature brings forth temporarily, which has grasped humans in admiration for centuries.

However, some events could also be due to human activities on Earth, which have globally resulted in climate change. 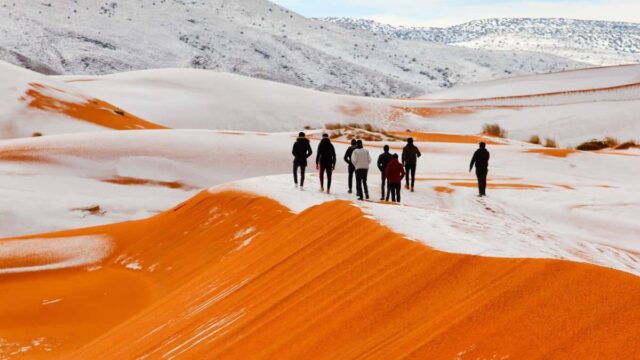 Hence, it was rather bewildering when snow fell upon one of the hottest deserts in the world – specifically the Tabuk Region in northwestern Saudi Arabia!

The Sahara Desert is known as one of the hottest and driest regions of the Earth, and covers a large portion of North Africa and extends to some part of the United Arab Emirates (UAE).

While UAE does experience winters owing to its ‘desert climate,’ this year was the coldest one by far. According to the National Centre of Meteorology (NCM), the temperature dropped significantly down to -2 °C, setting a global record. 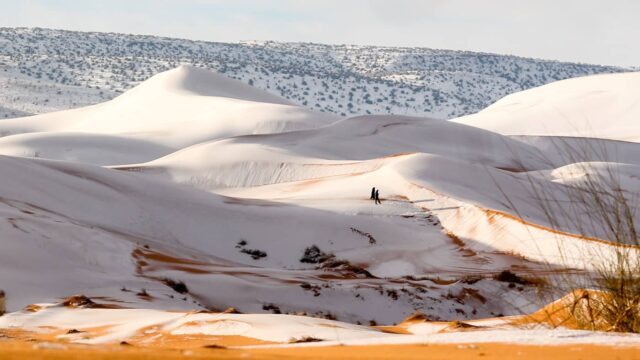 How did a region, whose temperature shoots up to 50°C during summers, suddenly get cast with an icy blanket? The senior meteorologist at Accuweather noted that although the event is surprising, it is also not unlikely. 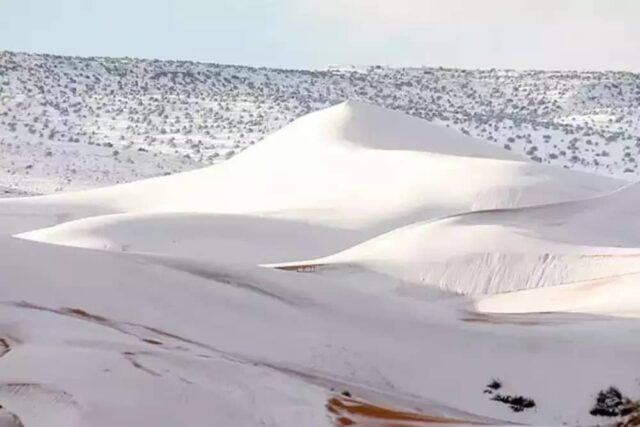 Sumant Nigam, a professor at the University of Maryland, has commented that this would soon have implications on other deserts in the world too.

A forecaster at the NCM explained that the chilly weather in UAE was due to the initiation of cold northeasterly winds, which eventually resulted in the movement of low-pressure systems over the landmass.

These sudden changes in the weather in the UAE is just one link amidst a larger chain of events happening across the world. The UK, especially England and Wales, has been warned to expect heavy downpour in the coming days.

Here Are More Breathtaking Pictures Of The Icy Sahara Desert

The temperatures have gone down differently in different locations. The small Algerian town of Ain Sefra, also known as the ‘The Gateway To The Desert,’ experienced -36°C. 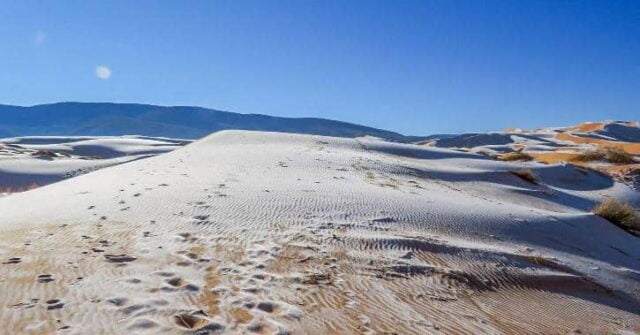 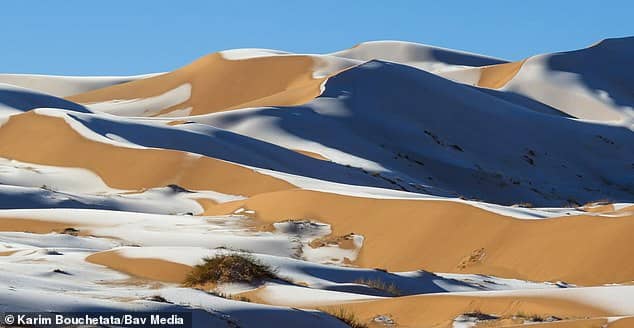 These pictures were taken by numerous photographers who visited the place along with a lot of tourists, who flocked the region to witness the event. It’s rather cute to see sheep walk across white-coloured dunes. 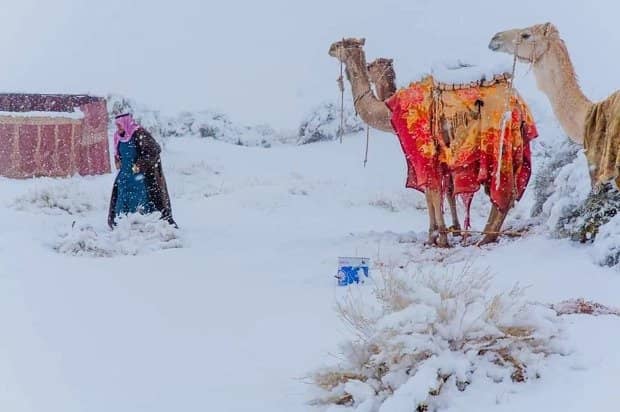 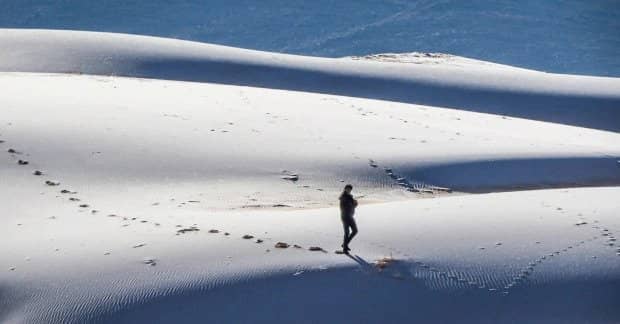 People in the region have shown immense joy and wonderment at the snowfall as they don’t experience it much. It is hypothesised that in the next 15,000 years, the desert will become green again.

Should We Be Worried?

In an age of climate change, such events must be viewed with suspicion – is it normal or should we brace ourselves for any bad news?

In a recent compilation of satellite images that NASA released to portray the effect of climate change, the picture of a rare snowfall, that took place in the desert in 2016, was included. However, instead of pointing out the snowfall, it talked about how fast the fallen snow had melted.

Hence, while the snowfall itself isn’t too dangerous considering it has happened before, the later implications of how fast it melts could be.

This is because the major concern and problem that we face today are rising global temperatures, which we need to tackle effectively before nature ‘deserts’ us forever.

This post is tagged under: climate change, how did it snow in sahara desert, why is it snowing in saudi arabia, why is it snowing in africa, where is sahara desert, hottest and driest region in the world, whichregion received snow, satellite images of the snow, meteorology department, accuweather, why are there weather changes across the world, cold weather, rains in uk, where is it going to rain, wales, england, snow in tubuka region, sheeps, camels

In Pics: New Kerala Park Goes Viral After People Started Comparing It With A European City