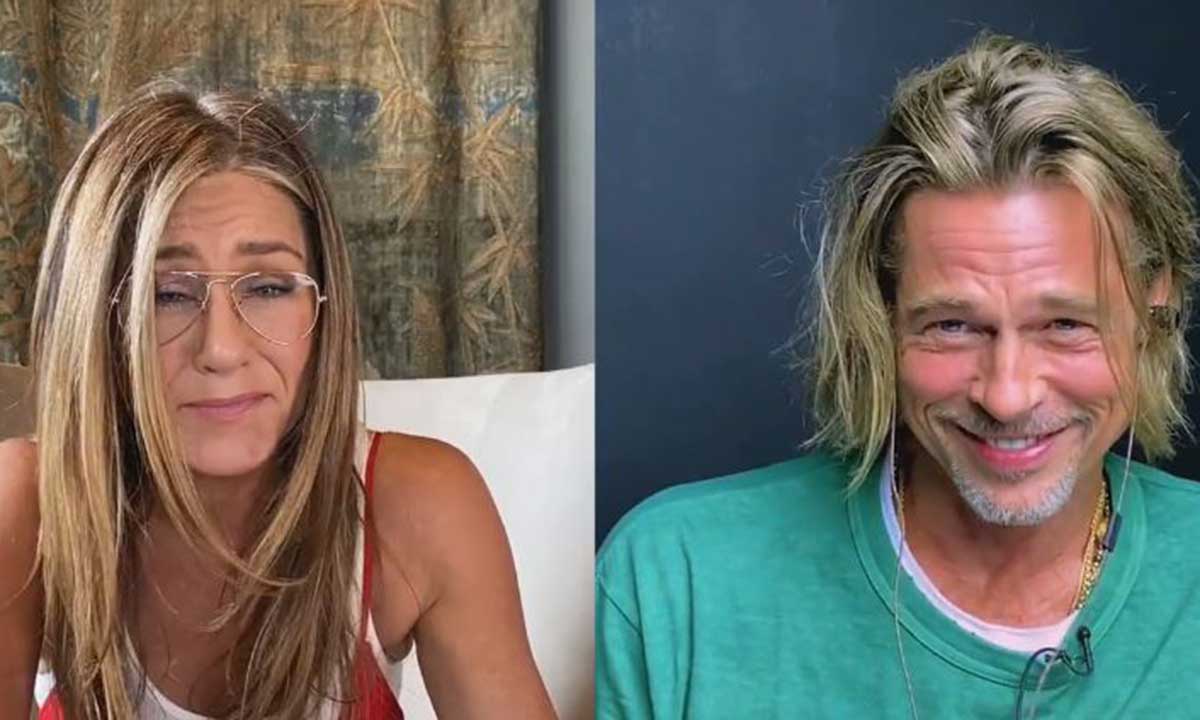 It is not always that something that seemed almost impossible actually happens in real life.

Something similar was felt by thousands of fans world over when last week, Hollywood actors Jennifer Aniston and Brad Pitt joined a bunch of well-renowned actors to do a virtual table-read of an old 80’s drama.

This is the first time the two actors were on the same screen in nearly twenty years when they had decided to end their marriage.

As expected, the internet lost their minds over this, with the clips of the table-read trending and going viral across social media platforms.

The table-read was actually for a good cause and the proceeds for the charity event will go to actor Sean Penn’s Penn’s nonprofit CORE (Community Organized Relief Effort) and the REFORM Alliance.

What Was The Event All About?

On September 17th, a live-streamed charity fundraising event was hosted by Dane Cook.

The event was a virtual table-read of the 1982 teen drama Fast Times at Ridgemont High and was narrated by Morgan Freeman.

The event also included Sean Penn and Jennifer Jason Leigh who are original cast members from the film.

In the hour-long fundraiser event, Pitt spoke for the character of Brad Hamilton and Aniston was given Linda Barrett.

The pair greeted each other warmly with a “Hi Aniston” and “Hi Pitt” giving an indication to at least a cordial relationship with each other.

The drama had some pretty thirsty lines in it though, one of them being when Hamilton is daydreaming about Linda and in it, she says, “Hi, Brad. You know how cute I always thought you were. I think you’re so sexy. Will you come to me?”

There is even a lengthy passage where Brad is fantasising about Linda’s body, which almost made Freeman utter, “Lord, have mercy”.

The last time they shared a screen together was in 2001 when Brad Pitt made a guest appearance on Aniston’s show Friends playing the role of a friend of Ross’s (David Schwimmer) who hated Rachel (Aniston).

Read More: What Happened When The Indian Version Of F.R.I.E.N.D.S Hit Television Screens in 1999

The people behind the event certainly knew what they were doing by getting both Pitt and Aniston for the event since as soon as video clips emerged of this table-read, the internet lost its mind.

Fans were going crazy over seeing these two on-screen once more and certainly liked their interactions.

Screaming. Can someone give Jennifer Aniston an Oscar for doing this with her ex? pic.twitter.com/jq2yz9KVE0 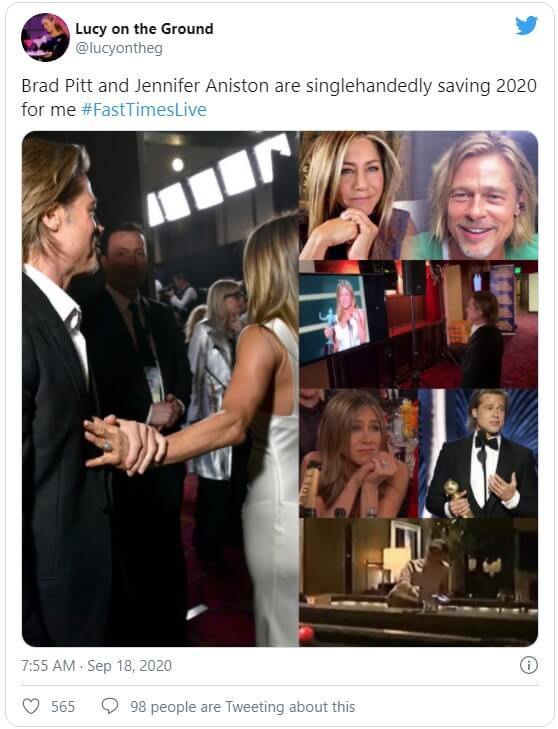 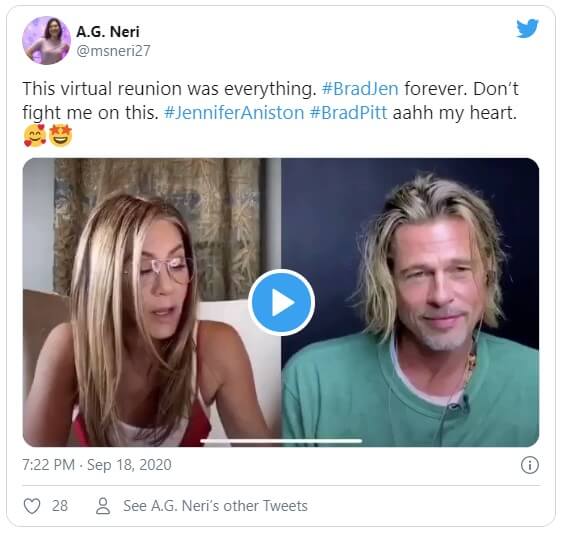 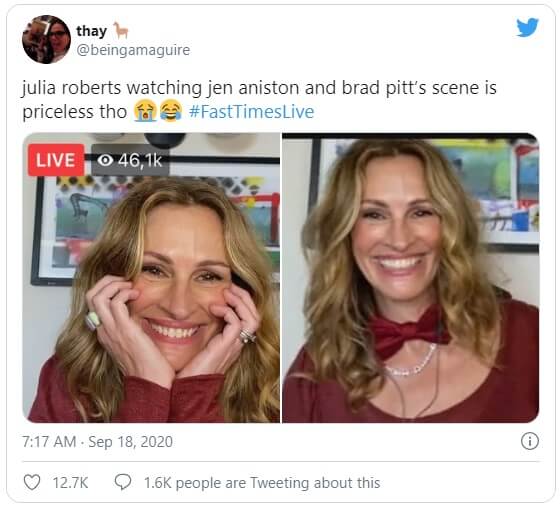 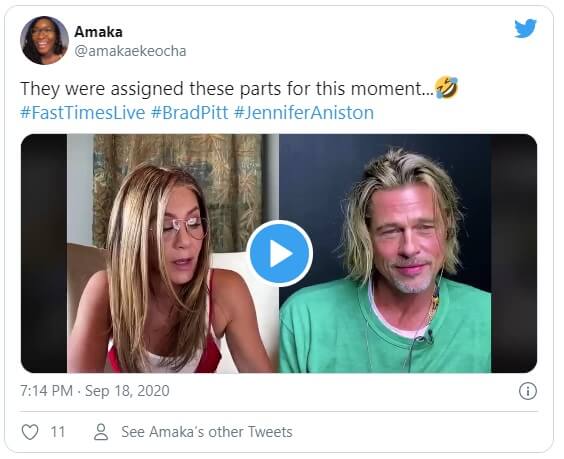 This will definitely stop everyone obsessing over Brad and Jen reunions. #FastTimesLive pic.twitter.com/lVeCNdxNC0

I wasn’t even old enough to care about brad pitt and jennifer aniston when they were together why is this making me scream pic.twitter.com/2kMEf9f9W7 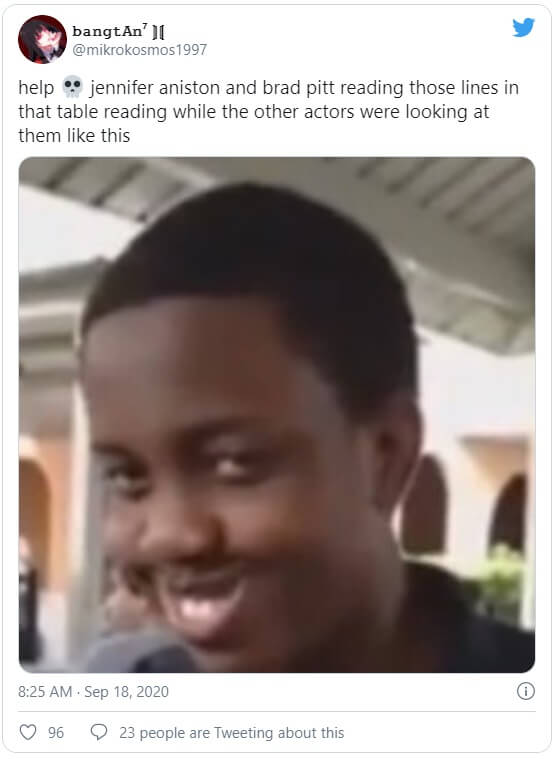 This was certainly an interesting reprieve from the current situations surrounding many of us around the globe. It was also good to see an example of healthy exs who can be cordial, even friendly to each other when the occasion calls for it.