Disclaimer: This is not an opinion piece. These are simply facts, a collection of events lined up to make sense. Nothing more. Its sole purpose is to make people understand why and what exactly did Hitler do.

The Holocaust was one of the most dreadful and horrifying, not to mention the largest genocides to have taken place. As genocides go, it was still a massive feat achieved with an inhumane efficiency and scary ease.

But why did Hitler and many of those around him as well as the public think that an entire group of people needed to be wiped out?

To understand this, let’s gain a bit of background. Let’s take a leap into the past.

The year is 1919 and the Treaty of Versailles has just been signed. Germany is defeated and in ruins. A young Adolf, who had received the news of defeat while recovering from a mustard gas attack is looking for someone to blame for the defeat, as many are.

The Germans were shattered. Both economically and mentally, they were humiliated and the monster they found to blame was the Jews.

It might surprise you that a significant portion of the German population believed that it was the Jews who were actually to blame for this catastrophe.

They believed that they were betrayed by the civilians on the home front, especially the Republicans who overthrew the monarchy in the German Revolution of 1918–19.

They denounced the German government leaders who signed the Armistice (a surrender agreement basically) on November 11, 1918, as the “November Criminals”.

And it was believed that these people were mostly “Jewish War Profiteers” or “International Jewish Financiers” who’d love to have the country brought down to its knees. He thought that all the Jews were involved in a giant international conspiracy to bring them down and profit off it. 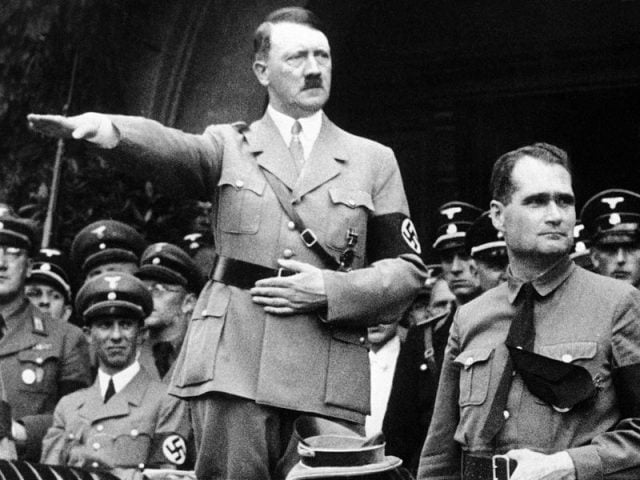 He even wrote quite extensively about his beliefs in his book ‘Mein Kampf’. He said:

“If with the help of his Marxist creed, the Jew is victorious over the other peoples of the world, his crown will be the funeral wreath of humanity and this planet will, as it did thousands of years ago, move through the ether devoid of men.

Eternal Nature inexorably avenges the infringement of her commands.

Hence today I believe that I am acting in accordance with the will of the Almighty Creator: by defending myself against the Jew, I am fighting for the work of the Lord.”

“When the Jews have kept apart in the ghetto, and limited to certain professions, it was possible to accuse them of clannishness, and resent the interest they charged on loans.

But when they emerged from the ghetto and became captains of industry and finance, and socially and intellectually prominent, there was a whole new set of reasons to hate them.

The success of the emancipated Jews was perhaps even more galling than the poverty and degradation of disenfranchised Jews – and it gave rise to racial theories that posited an essential biological difference in them.”

We all know about Hitler’s obsession with the Aryan race and eugenics. In layman’s terms, he thought that the Germanic race or the Aryan race was biologically superior in all regards and that all other races were beneath them, he wanted to remove all other races, be subdued or removed from the face of the earth.

For Hitler, Jews ranked on the bottom of his imaginary eugenics ladder. They were barely considered members of society. This thought of biological superiority added on to the fact that he believed that the Jews betrayed them, leading to an unchecked hatred for them. You might also like: From Modi To Trump, Why Do Our Popularly Elected Leaders Fear Popular Media So Much?

So deep was his mistrust of the Jewish people that he said and I quote:

“The Jew’s domination in the state seems so assured that now not only can he call himself a Jew again, but he ruthlessly admits his ultimate national and political designs.

A section of his race openly owns itself to be a foreign people, yet even here they lie.

For while the Zionists try to make the rest of the world believe that the national consciousness of the Jew finds its satisfaction in the creation of a Palestinian state, the Jews again slyly dupe the dumb Goyim.

It doesn’t even enter their heads to build up a Jewish state in Palestine for the purpose of living there; all they want is a central organization for their international world swindle, endowed with its own sovereign rights and removed from the intervention of other states: a haven for convicted scoundrels and a university for budding crooks.”

His hatred and mistrust and general paranoia found an outlet in many ways, first from the systemic oppression and banishment of Jews from society (as early as 1932, groups of Storm Troopers came marching by singing: ‘When Jewish blood splatters from the knife and then the outright murder of millions.’)

From soldiers shooting them dead in the streets during the invasion of Poland to the gas chambers that were nothing but an exit gate from life for millions of Jews, to the concentration camps that reduced an entire population to something less than humans. When you think about the atrocities that Adolf Hitler committed, you think he’s a brainless madman. But no!

He did have a brain. A totally broke one yes, but he had one nonetheless. He had his reasons, however, twisted.

His love for his homeland knew no bounds but it was exactly this love that misguided and corrupted his brain and caused one of the greatest tragedies known to humanity.

It is my sincere hope you have at least caught a tiny glimpse into his perverted mind.